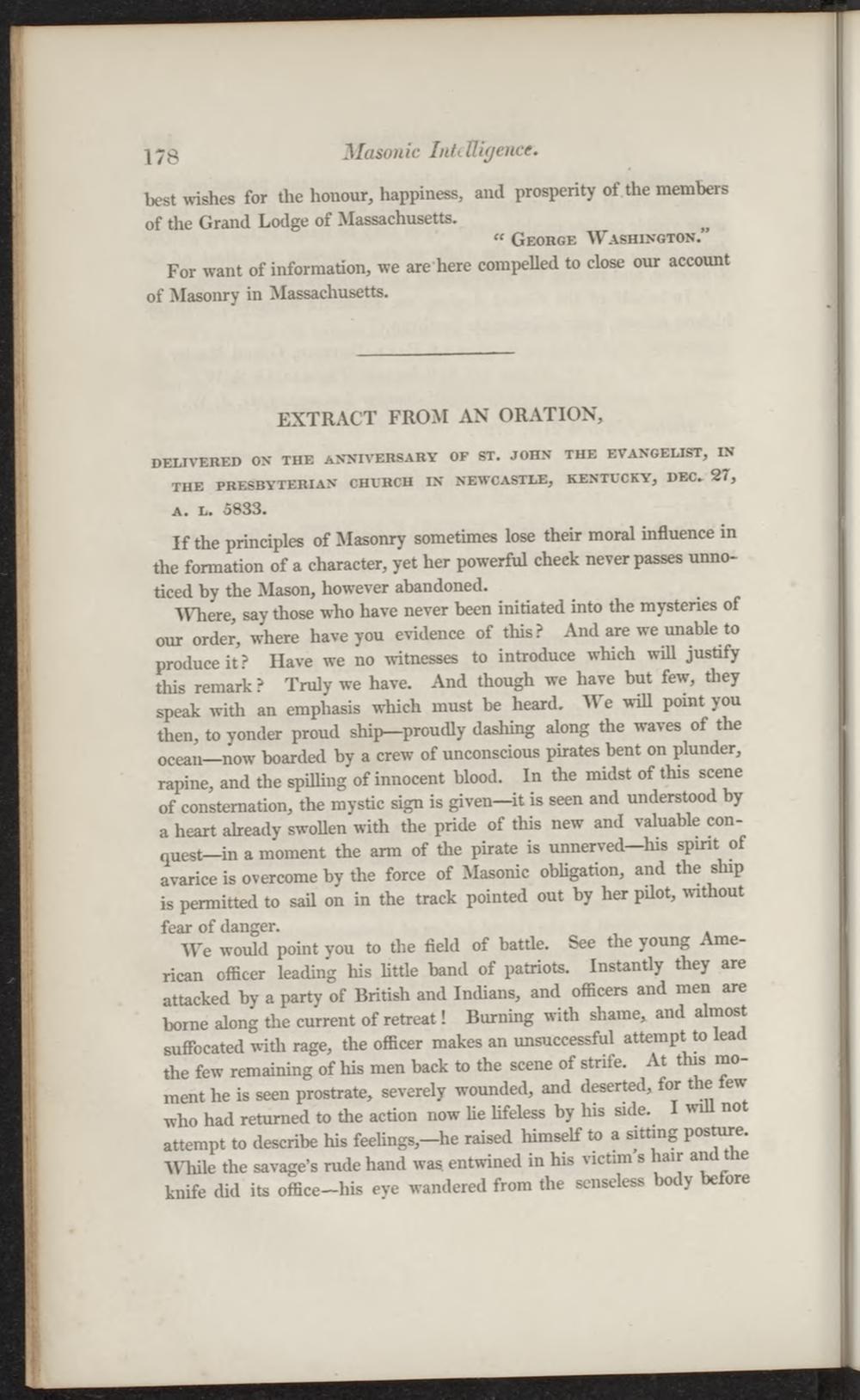 best wishes for the honour, happiness, and prosperity of the members of the Grand Lodge of Massachusetts.

" Geobge Washington. For want of information, we are here compelled to close our account of Masonry in Massachusetts.

EXTRACT FROM AN ORATION,

delivered os the annivebsaby of st. john the evangelist, in

If the principles of Masonry sometimes lose their inoral influence in the formation of a character, yet her powerful cheek never passes unnoticed by the Mason, however abandoned.

Where, say those who have never been initiated into the mysteries of our order, where have you evidence of this? And are we unable to produceit? Have we no witnesses to introducé which will justify this remark ? Truly we have. And though we have but few, they speak with an emphasis which must be heard. We will point you then, to yonder proud ship—proudly dashing along the waves of the ocean—now boarded by a crew of unconscious pirates bent on plunder, rapine, and the spilling of innocent blood. In the midst of this scene of consternation, the mystic sign is given—it is seen and understood by a heart already swollen with the pride of this new and valuable conquest—in a moment the arm of the pirate is unnerved—his spint of avarice is overcome by the force of Masonic obligation, and the ship is permitted to sail on in the track pointed out by her pilot, without fear of danger.

We would point you to the field of battle. See the young American officer leading his little band of patriots. Instantly they are attacked by a party of British and Indians, and officers and men are bome along the current of retreat! Burning with shame, and almost suffocated with rage, the officer makes an unsuccessful attempt to lead the few remaining of his men back to the scene of strife. At this moment he is seen prostrate, severely wounded, and deserted, for the iew who had retumed to the action now lie lifeless by his side. ^ n0 attempt to describe his feelings,—he raised himself to a sitting posture. While the savage's rude hand was. entwined in his victim s ïair an e knife did its office—his eye wandered from the senseless body before