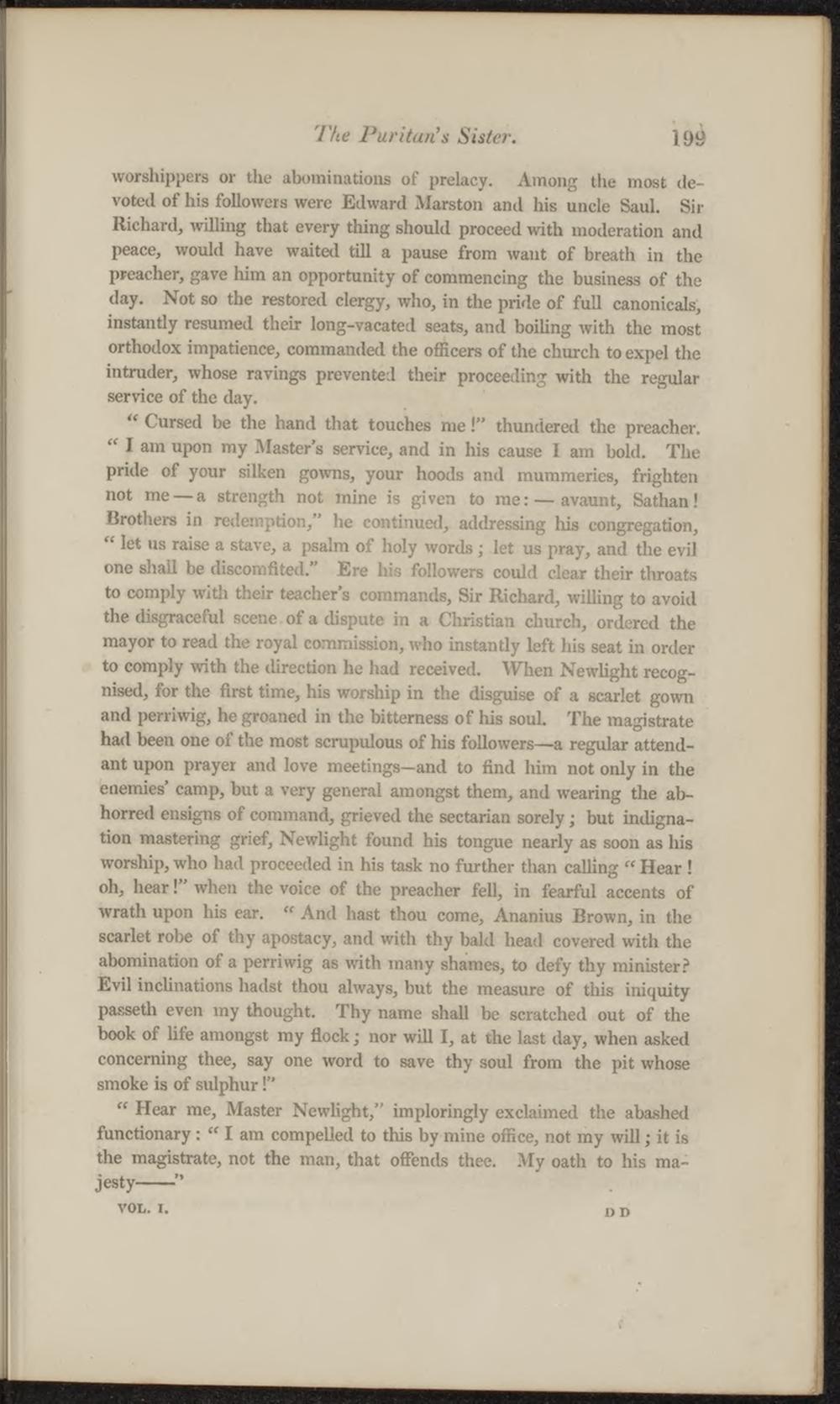 worsliippers or the abominations of prelacy. Among the most devoted of his followers were Edward Marston and his uncle Saul. Sir Richard, willing that every thing shoukl proceed with moderation and peace, would have waited till a pause from want of breath in the preacher, gave him an opportunity of commencing the business of the day. Not so the restored clergy, who, in the pride of full canonicals, instantly resumed their long-vacated seats, and boiling with the most orthodox impatience, commanded the officers of the church toexpel the intruder, whose ravings preventei their proceeding with the regular service of the day.

" Cursed be the hand that touches me thundered the preacher. " I am upon my Master's service, and in his cause I am bold. The pride of your silken gowns, your hoods and mummeries, frighten not me — a strength not mine is given to me: — avaunt, Sathan! Brothers in redemption, he continued, addressing his congregation, " let as raise a stave, a psalm of holy words ; let us pray, and the evil one shall be discomfited." Ere his followers could clear their throats to comply witli their teacher's commands, Sir Richard, willing to avoid the disgraceful scene of a dispute in a Christian church, ordered the mayor to read the royal commission, who instantly left his seat in order to comply with the direction he had received. When Newlight recognised, for the first time, his worship in the disguise of a scarlet gown and perriwig, he groaned in the bitterness of his soul. The magistrate had been one of the most scrupulous of his followers—a regular attendant upon prayer and love meetings—and to find him not only in the enemies' camp, but a very general amongst them, and wearing the abhorred ensigns of command, grieved the sectarian sorely; but indignation mastering grief, Newlight found his tongue nearly as soon as his worship, who had proceeded in his task no further than calling " Hear ! oh, hear!" when the voice of the preacher feil, in fearful accents of wrath upon his ear. " And hast thou come, Ananius Brown, in the scarlet robe of thy apostacy, and with thy bald head covered with the abomination of a perriwig as with many shames, to defy thy minister? Evil inclinations hadst thou always, but the measure of this iniquity passéth even my thought. Thy name shall be scratched out of the book of life amongst my flock; nor will I, at the last day, when asked concerning thee, say one word to save thy soul from the pit whose smoke is of sulphur!"

" Hear me, Master Newlight," imploringly exclaimed the abashed functionary: " I am compelled to this by mine office, not my will; it is the magistrate, not the man, that offends thee. My oath to his majesty "