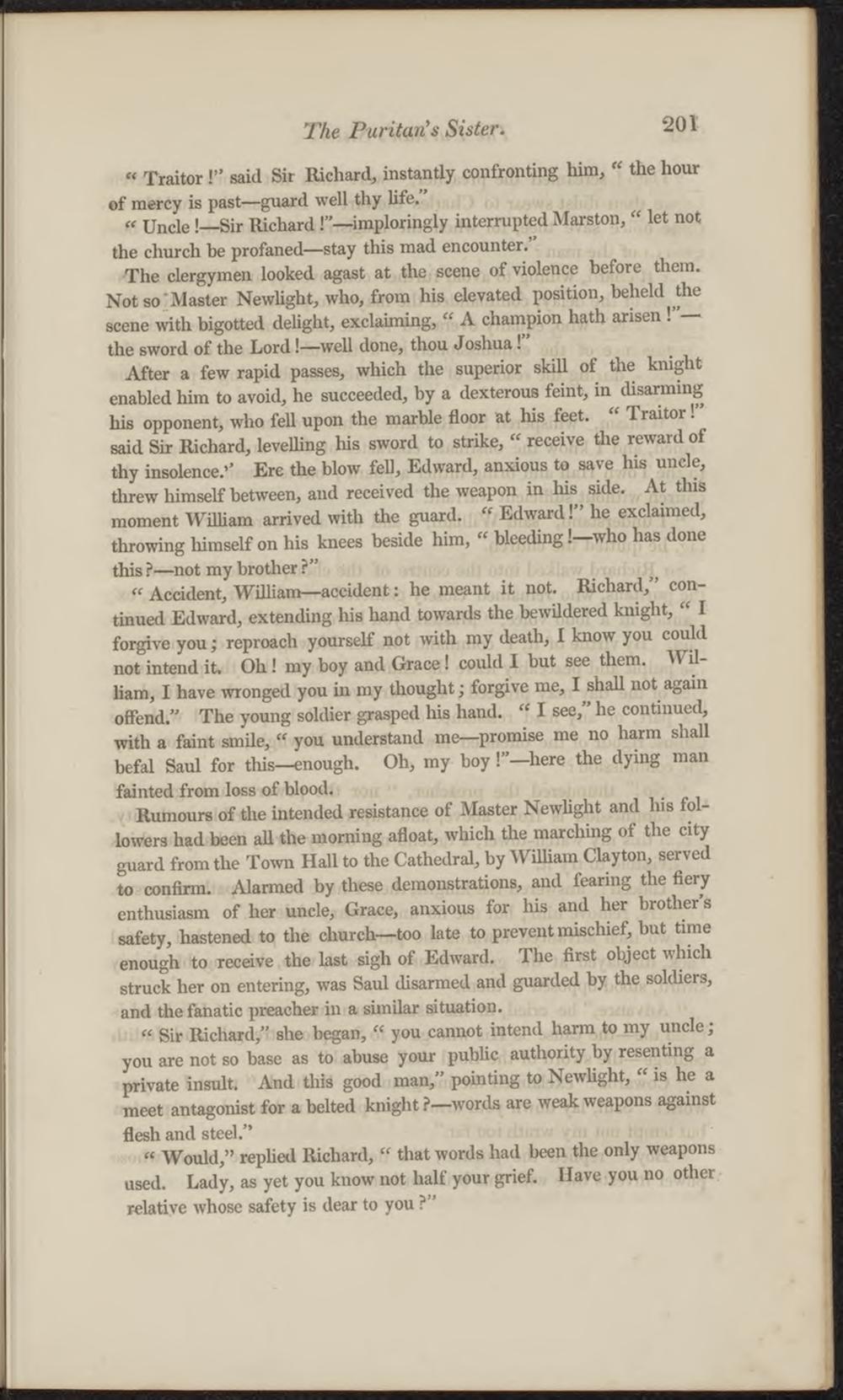 the church be profaned—stay this mad encounter.

The clergymen looked agast at the scene of violence before them. Not so' Master Newlight, who, from his elevated position, beheld the scene with bigotted delight, exclaiming, " A chainpion hath arisen !"— the sword of the Lord!—well done, thou Joshua!

After a few rapid passes, which the superior skill of the knight enabled him to avoid, he succeeded, by a dexterous feint, in disarmmg his opponent, who feil upon the marble floor at his feet. " Traitor! said Sir Richard, levelling his sword to strike, " receive the reward of thy insolence.'' Ere the blow feil, Edward, anxious to save his uncle, threw himself between, and received the weapon in his side. At this moment William arrived with the guard. " Edward!" he exclaimed, throwing himself on his knees beside him, " bleeding!—who has done

" Accident, William—accident: he meant it not. Richard," continued Edward, extending his hand towards the bewildered knight, " I forgive you; reproach yourself not with my death, I know you could not intend it. Oh! my boy and Grace! could I but see them. W illiam, I have wronged you in my thought; forgive me, I shall not again offend." The young soldier grasped his hand. " I see," he continued, with a faint smile, " you understand me—promise me no harm shall befal Saul for this—enough. Oh, my boy!"—here the dying man

fainted from loss of blood.

Rumours of the intended resistance of Master Newlight and lus followers had been all the morning afloat, which the marcliing of the city guard from the Toto Hall to the Cathedral, by William Clayton, served to confirm. Alarmed by these demonstrations, and fearing the fiery enthusiasm of her uncle, Grace, anxious for his and her brother's safety, hastened to the church—too late to prevent mischief, but time enough to receive the last sigh of Edward. The first object which struck her on entering, was Saul disarmed and guarded by the soldiers, and thefanatic preacher in a similar situation.

" Sir Richard," she began, " you cannot intend harm to my uncle; you are not so base as to abuse your public authority by resenting a private insult. And this good man," pointing to Newlight, " is he a meet antagonist for a belted knight ?—words are weak weapons against flesh and steel."

« Would," replied Richard, " that words had been the only weapons used. Lady, as yet you know not half your grief. Have you no other relative whose safety is dear to you ?'