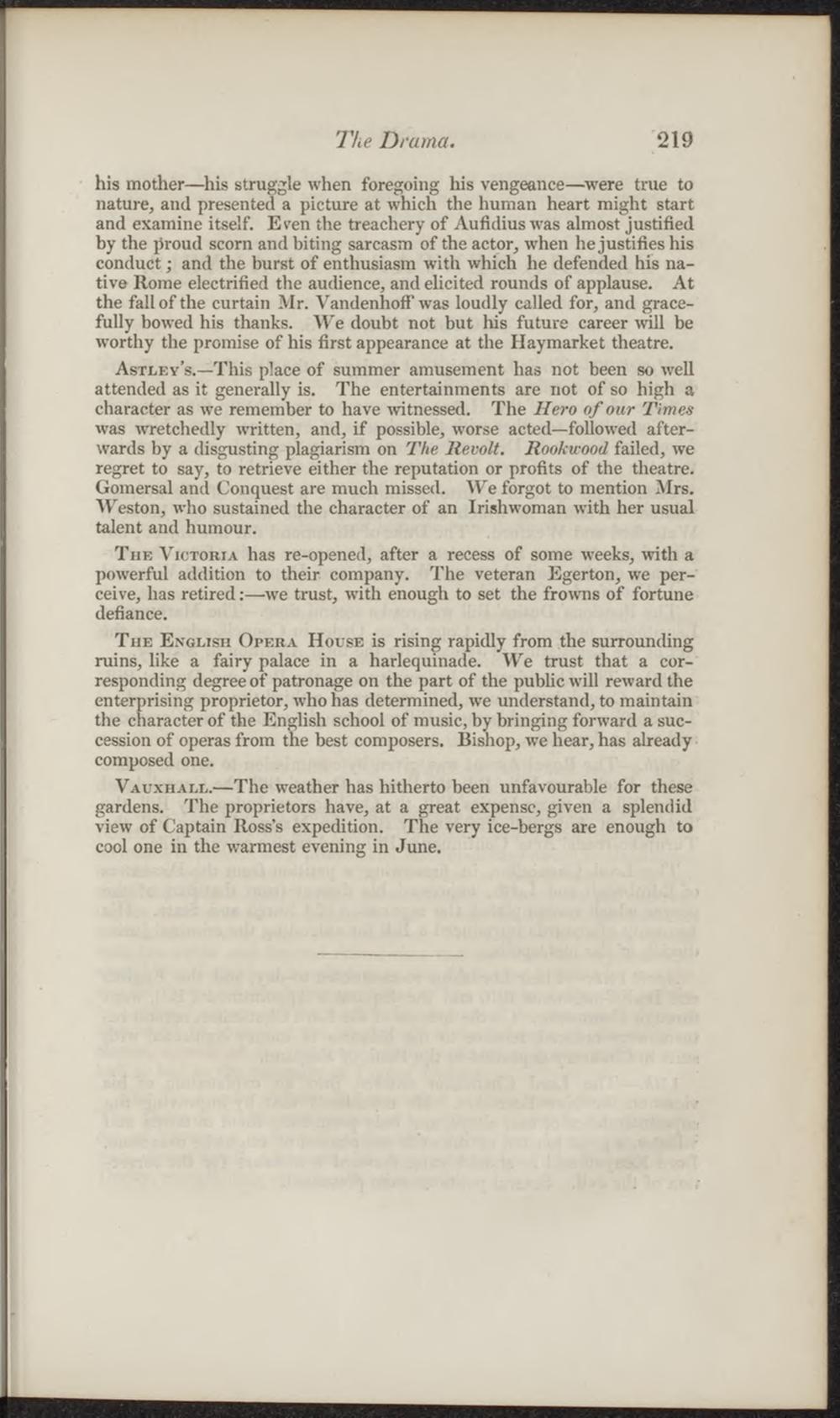 his mother—his struggle when foregoing his vengeance—were true to nature, and presented a picture at which the human heart might start and examine itself. Eren the treachery of Auftdius was almost justified by the proud scorn and biting sarcasm of the actor, when he justifles his conduct; and the burst of enthusiasra with which he defended his native Rome electrified the audience, and elicited rounds of applause. At the fall of the curtain Mr. VandenhofF was loudly called for, and gracefully bowed his thanks. We doubt not but his future career will be worthy the promise of his first appearance at the Haymarket theatre.

Astley's.—This place of summer amusement has not been so well attended as it generally is. The entertainments are not of so high a character as we remember to have witnessed. The Hero of our Times was wretchedly written, and, if possible, worse acted—followed afterwards by a disgusting plagiarism on The Hevolt. Rookn-ood failed, we regret to say, to retrieve either the reputation or profits of the theatre. Gomersal and Conquest are much missed. We forgot to mention Airs. Weston, who sustained the character of an Irishwoman with her usual talent and humour.

The Victoria has re-opened, after a recess of some weeks, with a powerful addition to their company. The veteran Kgerton, we perceive, has retired:—-we trust, with enough to set the frowns of fortune defiance.

The English Opera House is rising rapidly from the surrounding ruins, like a fairy palace in a harlequinade. We trust that a corresponding degreeof patronage on the part of the public will reward the enterprising proprietor, who has determined, we understand, to maintain the character of the English school of music, by bringing forward a succession of operas from the best composers. Bishop, we hear, has already composed one.

Vauxhall.—The weather has hitherto been unfavourable for these gardens. The proprietors have, at a great expense, given a splendid view of Captain Ross's expedition. The very ice-bergs are enough to cool one in the warmest evening in June.