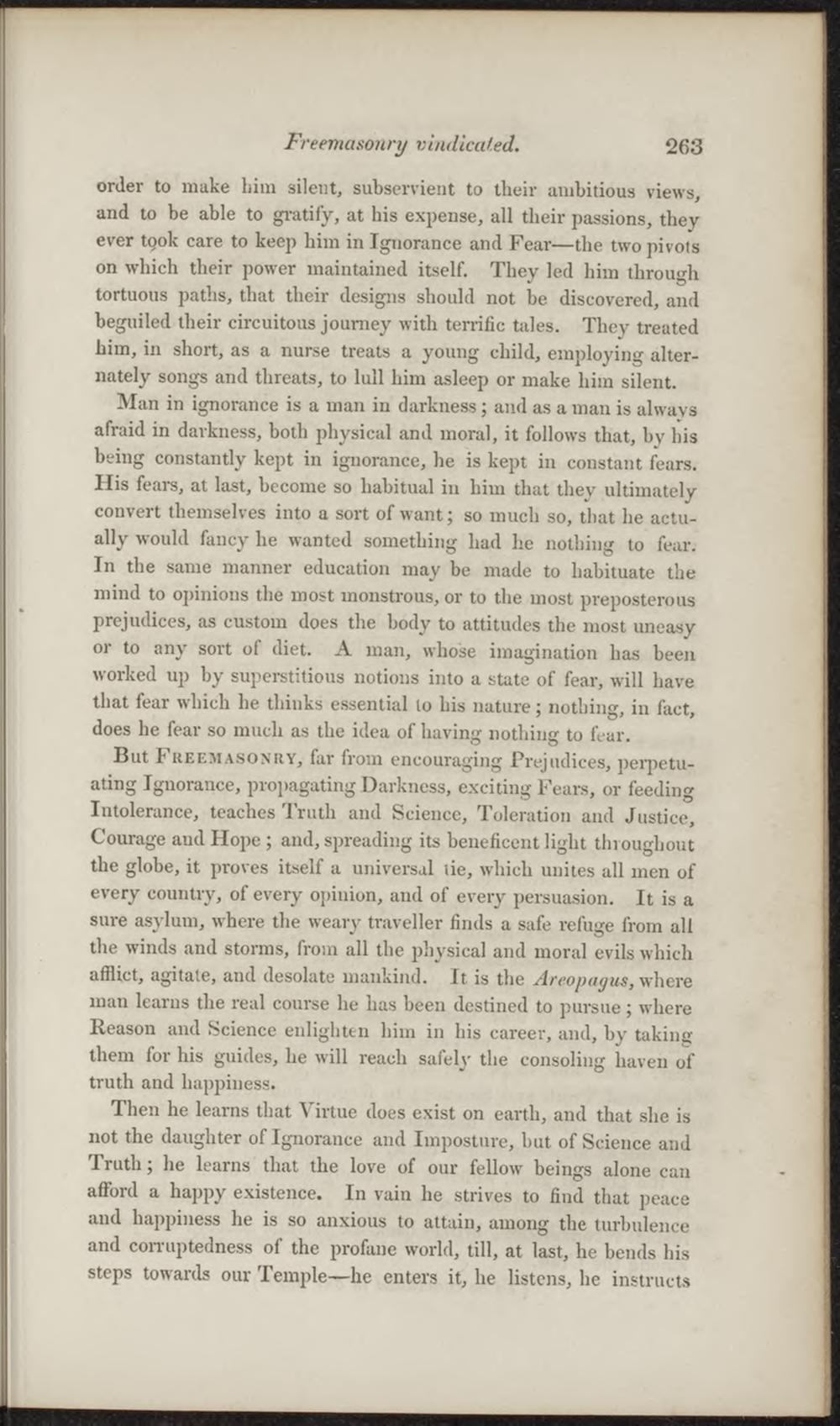 order to make him silent, subservient to their auibitious views, and to be able to gratify, at his expense, all their passions, they ever t<jok care to keep him in Ignorance and Fear—the two pivots on which their power maintained itself. They led him through tortuous paths, that their designs should not be discovered, and beguiled their circuitous journey with terrific tales. They treated him, in short, as a nurse treats a young child, employing alternately songs and threats, to lull him asleep or make him silent.

Man in ignorance is a man in darkness ; and as a man is alwavs afraid in darkness, both physical and moral, it follows that, by his being constantly kept in ignorance, he is kept in constant fears. His fears, at last, become so habitual in him that they ultimately convert themselves into a sort of want; so mucli so, that he actually would fancy he wanted something had he nothing to fear. In the same manner education may be made to liabituate the mind to opinions the most inonstrous, or to the most preposterous prejudices, as custom does the body to attitudes the most uneasy or to any sort of diet. A man, who'se imagination bas been worked up by superstitious notions into a state of fear, will have that fear which he tliinks essential to his nature; nothing, in fact, does he fear so mucli as the idea of having nothing to fear.

But Freemasonry, far from encouraging Prejudices, perpetuating Ignorance, propagating Darkness, exciting Fears, or feeding Intolerance, teaches Truth and Science, Toleration and Justice, Courage aud Hope ; and, spreading its beneficent light thi ougliout the globe, it proves itself a universal lie, which unites all men of every country, of every opinion, and of every persuasion. It is a sure asylum, where the weary traveller finds a safe refuge from all the winds and storms, from all the physical and moral evils which afflict, agitate, and desolate mankind. It. is the Areopagus, where man learus the real course he lias been destined to pursue; where Reason and Science enlighten him in his career, and, by taking them for his guides, he will reach safely the consoling haven of truth and happiness.

Then he learns that Virtue does exist on earth, and that slie is not the daughter of Ignorance and Imposture, but of Science and Truth; he learns that the love of our fellow beings alone can afford a happy existence. In vain he strives to find that peace and happiness he is so anxious to attain, among the turbulence and coiïuptedness of the profane world, till, at last, he bends his steps towards our Temple—he enters it, he listens, he instructs