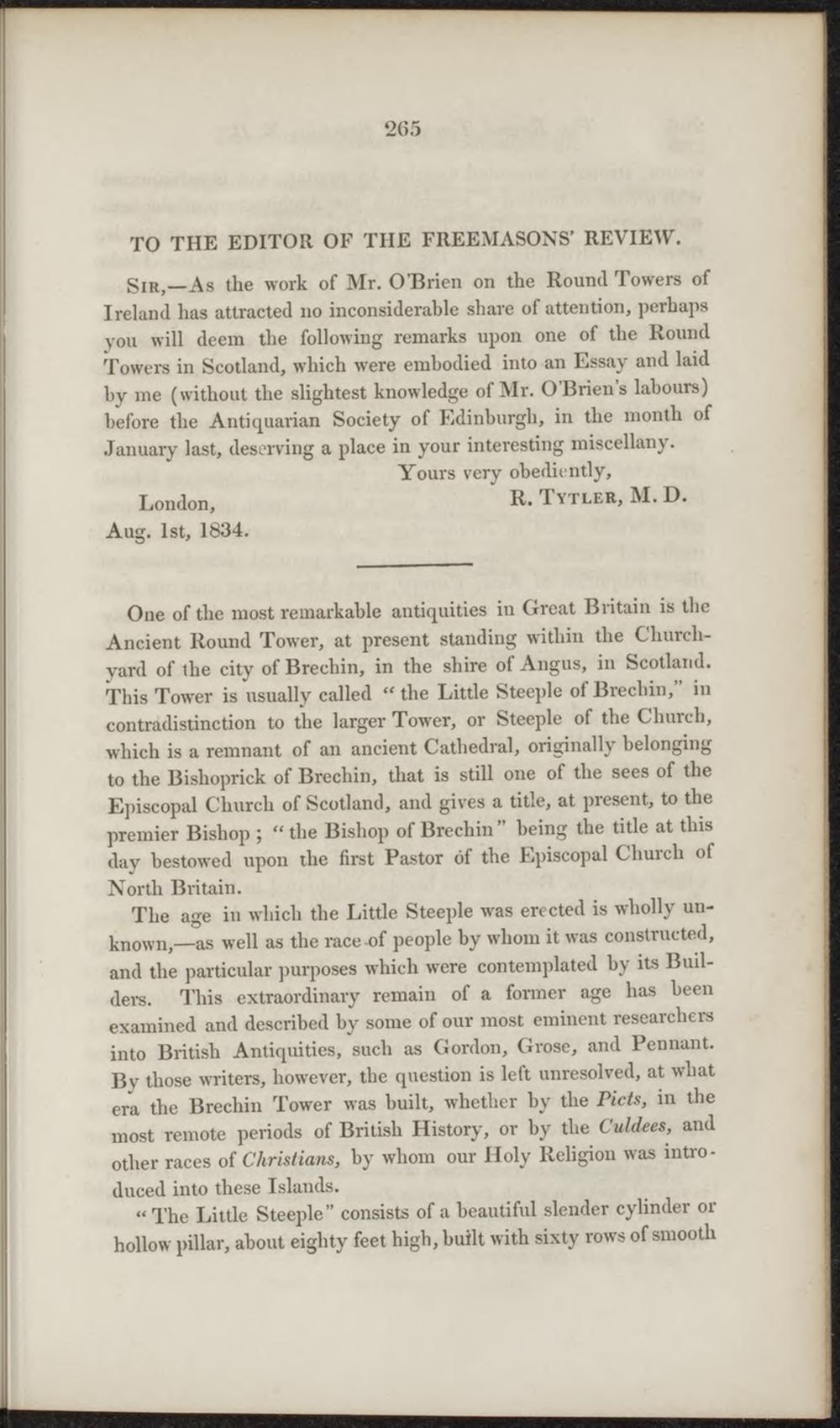 TO THE EDITOR OF THE FREEMASONS' REVIEW.

SlR,—As the work of Mr. O'Brien on the Round Towers of Ireland has attracted no inconsiderable share of attention, perhaps you will deem the following remarks upon one of the Round Towers in Scotland, which were embodied into an Essay and laid by me (without the slightest knowledge of Mr. O Brien s labours) before the Antiquarian Society of Edinburgh, in the month of January last, deserving a place in your interesting miscellany.

One of the most remarkable antiquities in Great Britain is the Ancient Round Tower, at present standing witliin the Churchyard of the city of Brechin, in the shire of Angus, in Scotland. This Tower is usually called " the Little Steeple of Brechin," in contradistinction to the larger Tower, or Steeple of the Church, which is a remnant of an ancient Cathedral, originally belonging to the Bishoprick of Brechin, tliat is still one of the sees of the Episcopal Church of Scotland, and gives a title, at present, to the premier Bishop ; " the Bishop of Brechin " being the title at this day bestowed upon the first Pastor óf the Episcopal Church of North Britain.

The age in which the Little Steeple was erected is wholly unknown,—as well as the race-of people by wliom it was constructed, and the particular purposes which were contemplated by its Builders. This extraordinary remain of a former age has been examined and described by some of our most eminent researchers into British Antiquities, such as Gordon, Grose, and Pennant. By those writers, however, the question is left unresolved, at wliat era the Brechin Tower was built, whetlier by the Picts, in the most remote periods of British History, or by the Culdees, and other races of Christians, by whom our Holy Religion was intro-

duced into these Islands.

"The Little Steeple" consists of a beautiful slender cylinder or hollow pillar, about eiglity feet high, built with sixty rows of smooth