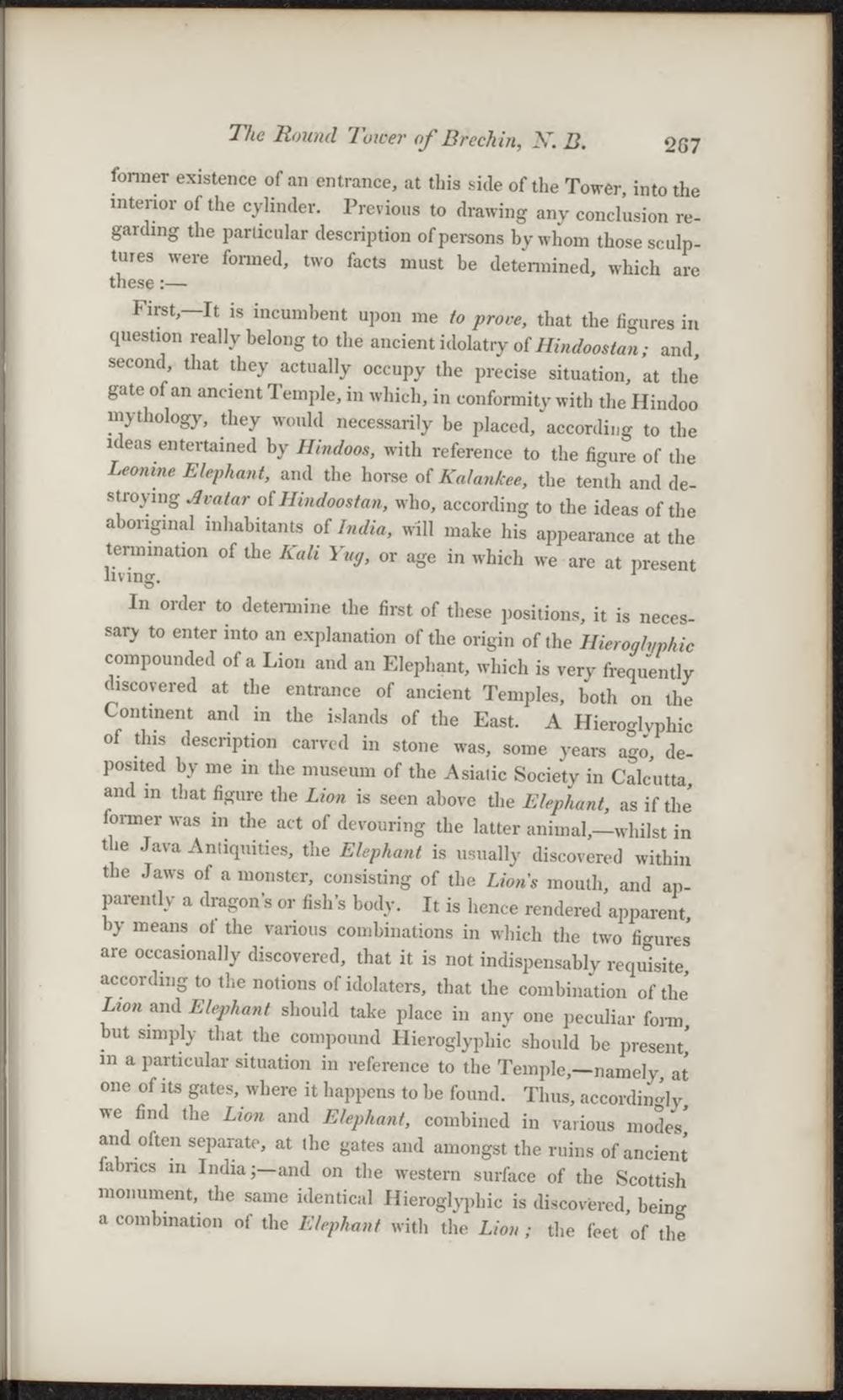 tonner existence of an entrance, at this side of the Tower, into the in tenor of the cylinder. Previous to drawing any conclusion regaidmg the parlicular description of persons bywhom those sculptures were forined, two faets must be detennined, which are these:—

First —It is incumbent upon me to prove, that the figures in

question reallybelong to the ancient idolatry of Hindoostan; and

second that they actually occupy the precise situation, at the'

gate of an ancient Temple, in which, in conformity with the Hindoo

mythology, they would necessarily be placed, according to the

1 entertained by Hindoos, with reference to the figure of the

Leonine Elephant, and the horse of Kalankee, the tenth and de-

stioying Avatar of Hindoostan, who, according to the ideas of the

aboriginal inhabitants of India, will make his appearance at the

tcnmnation of the Kali Yug, or age in which we are at present living.

In order to determine the first of these positions, it is necessary to enter into an explanation of the origin of the Hieroglvphic compounded of a Lion and an Elephant, which is very frequently discovered at the entrance of ancient Temples, both on the Contment and in the islands of the East. A Hieroglvphic of this description carved in stone was, some years agó, deposited by me in the museum of the Asiatic Society in Calcutta, and m that figure the Lion is seen above the Elephant, as if the' fonner was 111 the act of devouring the latter animal,—whilst in the Java Anliquities, the Elephant is usually discovered within the Jaws of a monster, consisting of the Lion's mouth, and apparently a dragons or fish's body. It is lience rendered apparent, by means of the various combinations in which the two figures are occasionally discovered, that it is not indispensably requisite, according to the notions of idolaters, that the combination of the' Lion and Elephant should take place in any one peculiar form but simply that the compound Hieroglypliic should be present,' in a particular situation in reference to the Temple,—namely, at' one of its gates, where it happens to be found. Tlius, accoidinc'ly we find the Lion and Elephant, combined in various modes' and often separate, at ihe gates and amongst the ruins of ancient fabnes m India;—and on the western surface of the Scottish monument, the same identical Hieroglvphic is discovered, being a combination of the Elephant with the Lion ; the feet of the