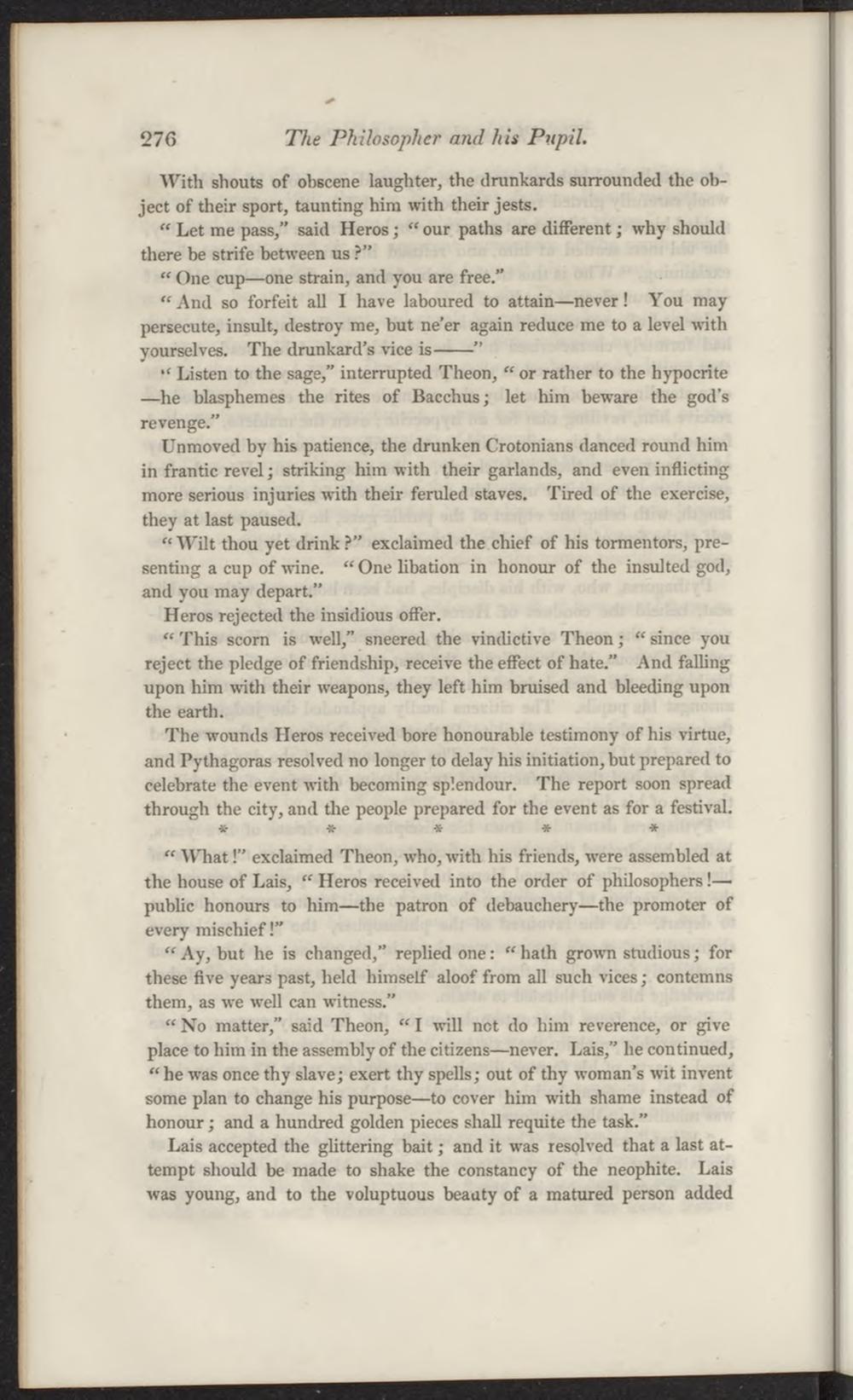 With shouts of obscene laughter, the drunkards surrounded the object of their sport, taunting him with their jests.

" Let me pass/' said Heros; " our paths are different; why should there be strife between us ?"

" One cup—one strain, and you are free."

"And so forfeit all I have laboured to attain—never! You may persecute, insult, destroy me, but ne'er again reduce me to a level with yourselves. The drunkard's vice is "

" Listen to the sage," interrupted Theon, " or rather to the hypocrite —he blasphemes the rites of Bacchus; let him beware the god's revenge."

Unmoved by his patience, the drunken Crotonians danced round him in frantic revel; striking him with their garlands, and even inflicting more serious injuries with their feruled staves. ïired of the exercise, they at last paused.

" Wilt thou yet drink ?" exclaimed the chief of his tormentors, presenting a cup of wine. " One libation in honour of the insulted god, and you may depart."

" This scorn is well," sneered the vindictive Theon; " since you reject the pledge of friendship, receive the effect of hate." And falling upon him with their weapons, they left him bruised and bleeding upon the earth.

The wounds Heros received bore honourable testimony of his virtue, and Pythagoras resolved no longer to delay his initiation, but prepared to celebrate the event with becoming sp'endour. The report soon spread

through the city, and the people prepared for the event as for a festival. *****

" What!" exclaimed Theon, who, with his friends, were assembled at the house of Lais, " Heros received into the order of philosophers!—• public honours to him—the patron of debauchery—the promoter of every mischief!"

" Ay, but he is changed," replied one: " hath grown studious; for these five years past, held himself aloof from all such vices; contemns them, as we well can witness."

" No matter," said Theon, " I will not do him reverence, or give place to him in the assembly of the citizens—never. Lais," he continued, " he was once thy slave; exert thy spells; out of thy woman's wit invent some plan to change his purpose—to cover him with shame instead of honour; and a hundred golden pieces shall requite the task."

Lais accepted the glittering bait; and it was resolved that a last attempt should be made to shake the constancy of the neophite. Lais was young, and to the voluptuous beauty of a matured person added