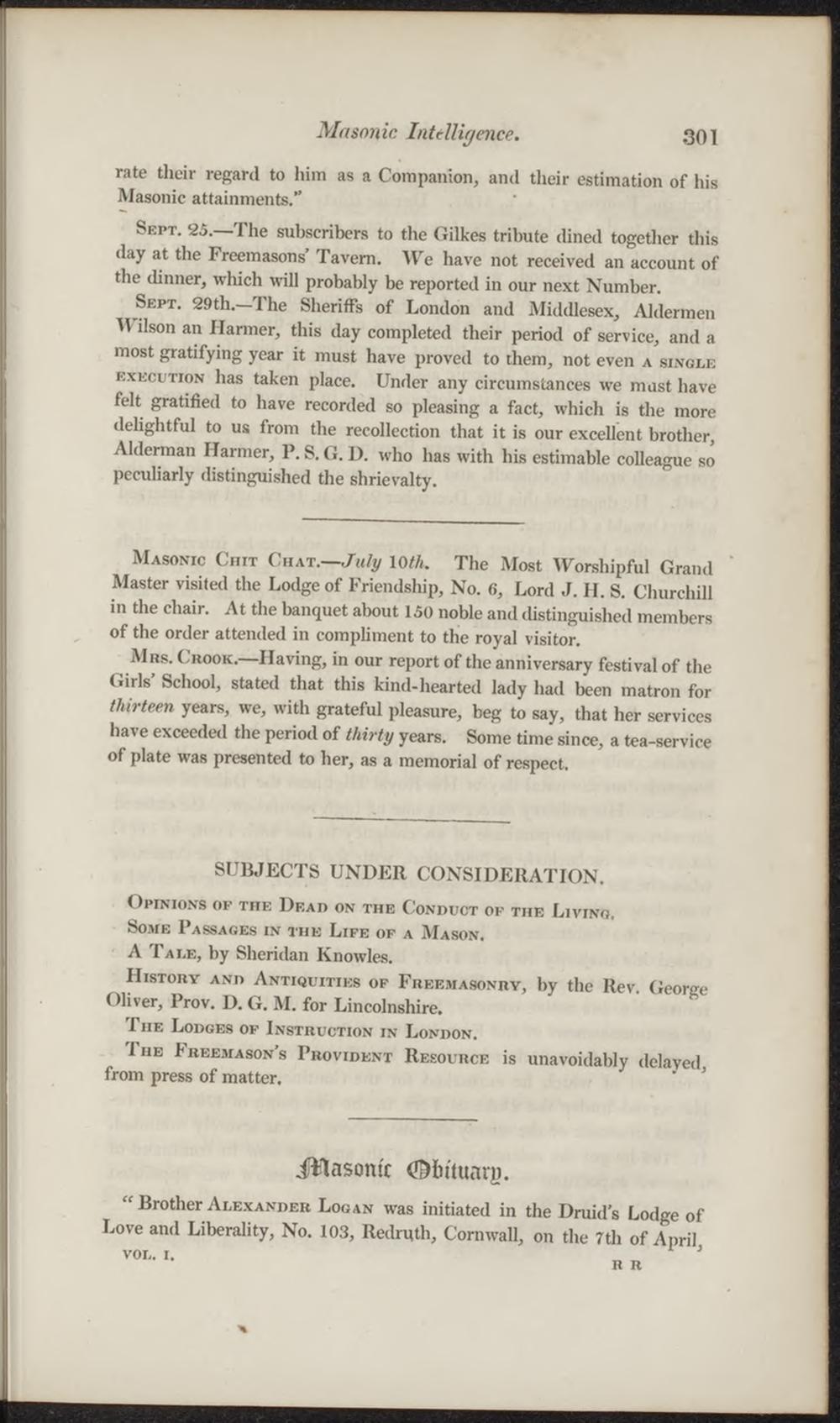 rate their regard to him as a Companion, and their estiraation of his Masonic attainments."

Sept. 25.—The subseribers to the Gilkes tribute dined together this day at the Freemasons f'avern. We have not received an account of the dinner, which will probably be reported in our next Nuraber.

Sept. 29th.—The Sheriffs of London and Middlesex, Aldermen VI dson an Harmer, this day completed their period of service, and a most gratifying year it must have proved to thein, not even a single execution has taken place. Under any circumstances we must have feit gratified to have recorded so pleasing a fact, which is the more delightful to us from the recollection that it is our excellent brother, Alderman Harmer, P. S. G. D. who has with his estimable colleague so peculiarly distinguished the shrievalty.

Masonic Ciiit Chat.—July 10th. The Most Worshipful Grand Master visited the Lodgeof Friendship, No. 6, Lord J. H. S. Churchill in the chair. At the banquet about 150 noble and distinguished members of the order attended in compliment to the royal visitor.

Mrs. ( kook. Having, in our report of the anniversary festival of the Girls' School, stated that this kind-hearted lady had been matron for thirieen years, we, with grateful pleasure, beg to say, that her services have exceeded the period of thirty years. Some time since, a tea-service of plate was presented to her, as a memorial of respect.

OpINIONS of the Dead on the C'onduct of tiie LlVING.

Some Passages in the Life of a Mason.

A Tai,e, by Sheridan Knowles.

History and Antiquities of Freemasonry, by the Rev. George Oliver, Prov. D. G. M. for Lincolnshire.

1 he Lodges of Instruction in London.

J he Freemason's Provident Resource is unavoidably delaved from press of matter.

" Brother Alexander Looan was initiated in the Druid's Lodge of Love and Liberality, No. 103, Redruth, Cornwall, on the 7th of April