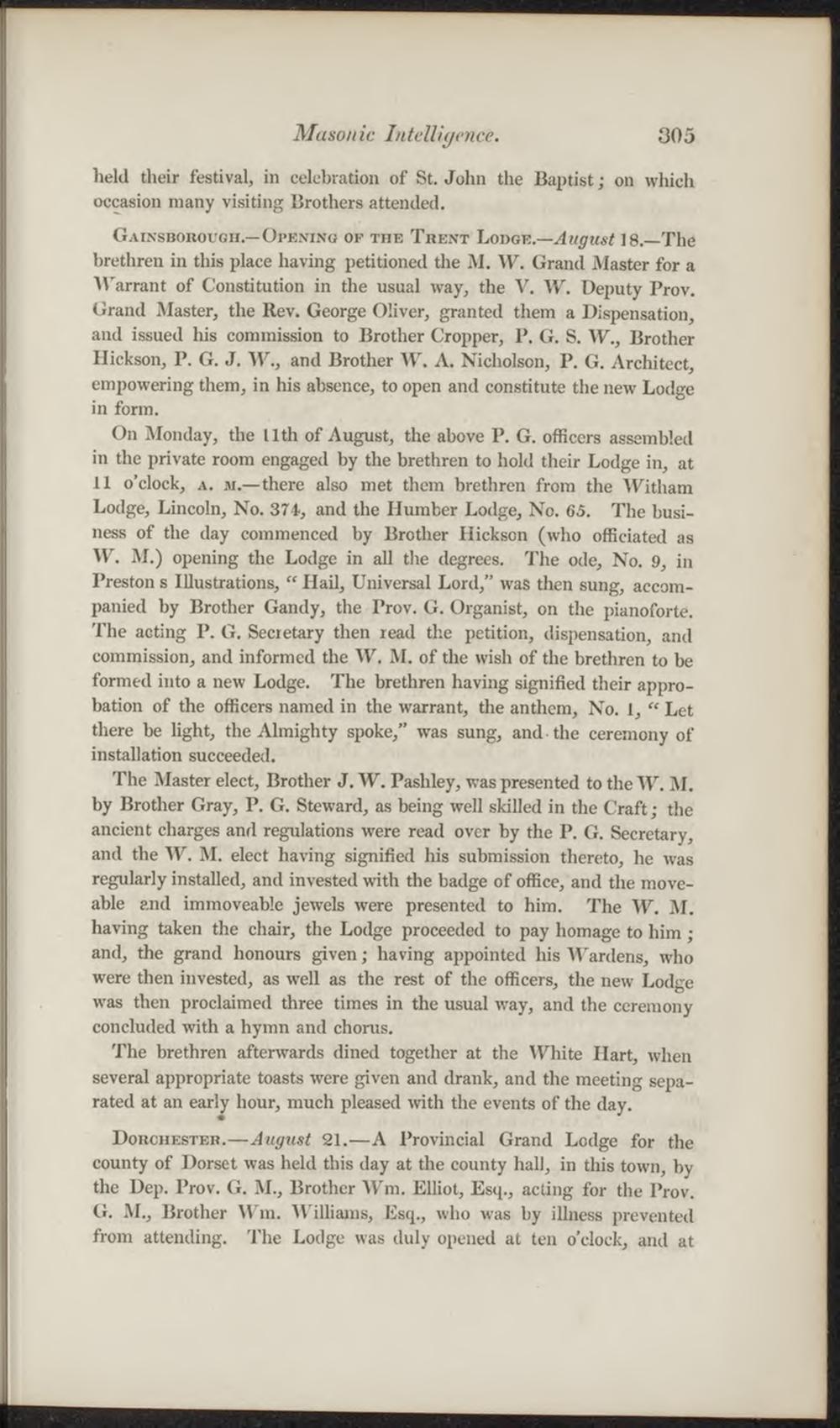 held tlieir festival, in celebration of St. John the Baptist; on which occasion many visiting Brothers attended.

Gainsborough.—Opening op the Trent Lodge.—August 18.—'The brethren in this place having petitioned the M. W. Grand Master for a Warrant of Constitution in the usual way, the V. W. Deputy Prov. Grand Master, the Rev. George Oliver, granted them a Dispensation, and issued his commission to Brother Cropper, 1'. G. S. W., Brother Hickson, P. G. J. W., and Brother W. A. Nicholson, P. G. Architect, empowering them, in his absence, to open and constitute the new Lodge in form.

On Monday, the llth of August, the above P. G. officers assembled in the private room engaged by the brethren to hold their Lodge in, at 11 o'clock, a. m.—there also met them brethren from the Wïtham Lodge, Lincoln, No. 374-, and the Humber Lodge, No. 65. The business of the day commenced by Brother Hickson (who officiated as W. M.) opening the Lodge in all the degrees. The ode, No. 9, in Preston s Illustrations, " Hail, Universal Lord," was then sung, accompanied by Brother Gandy, the Prov. G. Organist, on the pianoforte. The acting P. G. Secietary then read the petition, dispensation, and commission, and informed the W. M. of the wish of the brethren to be formed into a new Lodge. The brethren having signified their approbation of the officers named in the warrant, the anthem, No. 1, " Let there be light, the Almighty spoke," was sung, and the ceremony of installation succeeded.

The Master elect, Brother J. W. Pashley, was presented to the W. M. by Brother Gray, P. G. Steward, as being well skilled in the Craft; the ancient charges and regulations were read over by the P. G. Secretary, and the W. M. elect having signified his submission thereto, he was regularly installed, and invested with the badge of office, and the moveable and immoveable jewels were presented to him. The W. M. having taken the chair, the Lodge proceeded to pay homage to him ; and, the grand honours given; having appointed his Wardens, who were then invested, as well as the rest of the officers, the new Lodge was then proclaimed three times in the usual way, and the ceremony concluded with a hymn and chorus.

The brethren afterwards dined together at the White Hart, when several appropriate toasts were given and drank, and the meeting separated at an early hour, much pleased with the events of the day.