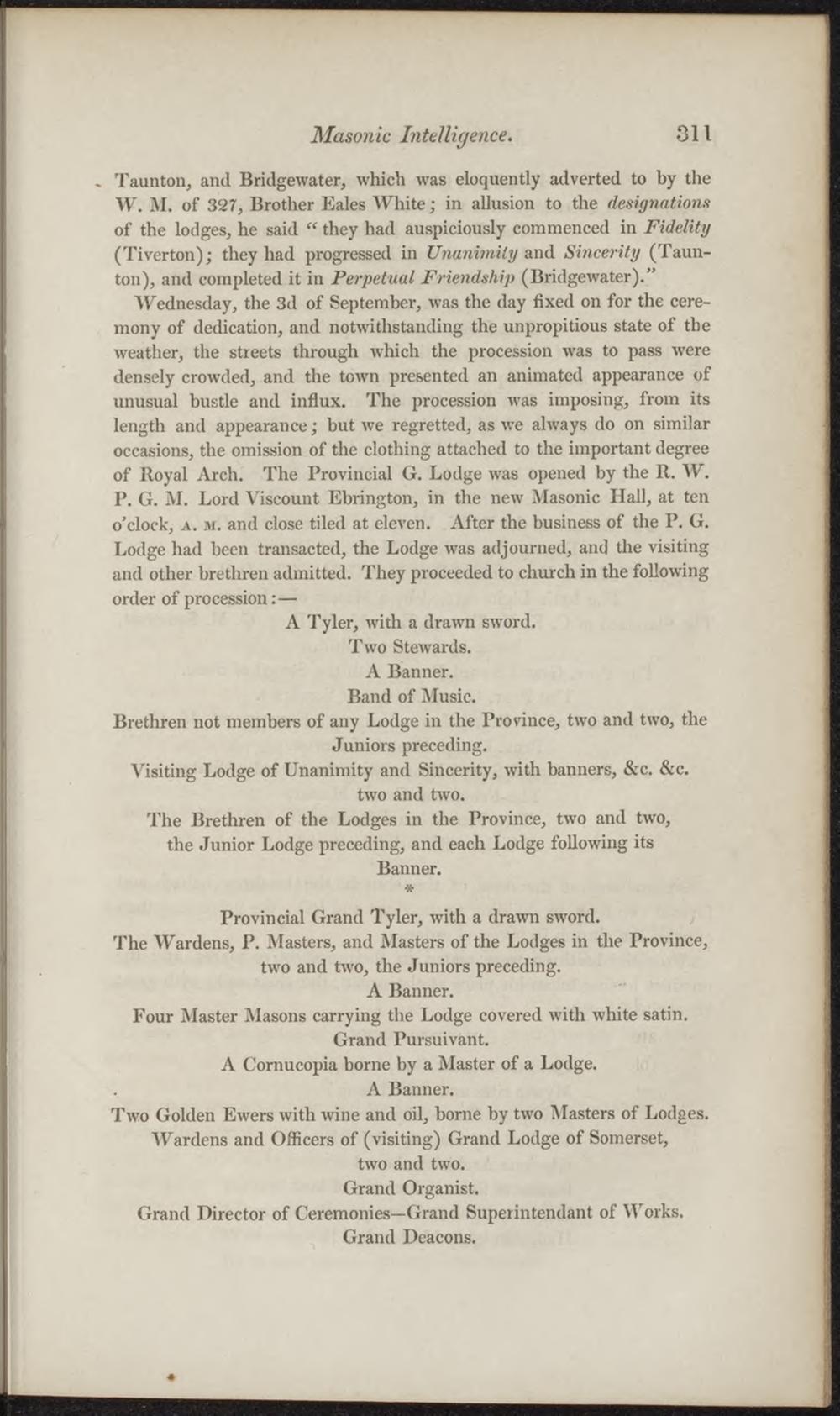 . Taunton, and Bridgewater, which was eloquently adverted to by the W. M. of 327, Brother Eales White; in allusion to the designatiom of the lodges, he said " they had auspiciously commenced in Fidelity (Tiverton); they had progressed in Unanimily and Sincerity (Taunton), and completed it in Perpetual Friendship (Bridgewater)."

Wednesday, the 3d of September, was the day fixed on for the ceremony of dedication, and notwithstanding the unpropitious state of the weather, the streets through which the procession was to pass were densely crowded, and the town presented an animated appearance of unusual bustle and influx. The procession was imposing, from its length and appearance; bat we regretted, as we always do on similar occasions, the omission of the clothing attached to the important degree of Royal Arch. The Provincial G. Lodge was opened by the R. W. P. G. M. Lord Viscount Ebrington, in the new Masonic Hall, at ten o'clock, a. m. and close tiled at eleven. After the business of the P. G. Lodge had been transacted, the Lodge was adjourned, and the visiting and other brethren admitted. They proceeded to church in the following order of procession:—

A Tyler, with a drawn sword.

Brethren not members of any Lodge in the Province, two and two, the Juniors preceding.

Visiting Lodge of Unanimity and Sincerity, with banners, &c. &c. two and two.

The Brethren of the Lodges in the Province, two and two, the Junior Lodge preceding, and each Lodge following its

Provincial Grand Tyler, with a drawn sword. The Wardens, P. Masters, and Masters of the Lodges in the Province, two and two, the Juniors preceding.

A Cornucopia borne by a Master of a Lodge.

Two Golden Ewers with wine and oil, borne by two Masters of Lodges. Wardens and Officers of (visiting) Grand Lodge of Somerset, two and two.