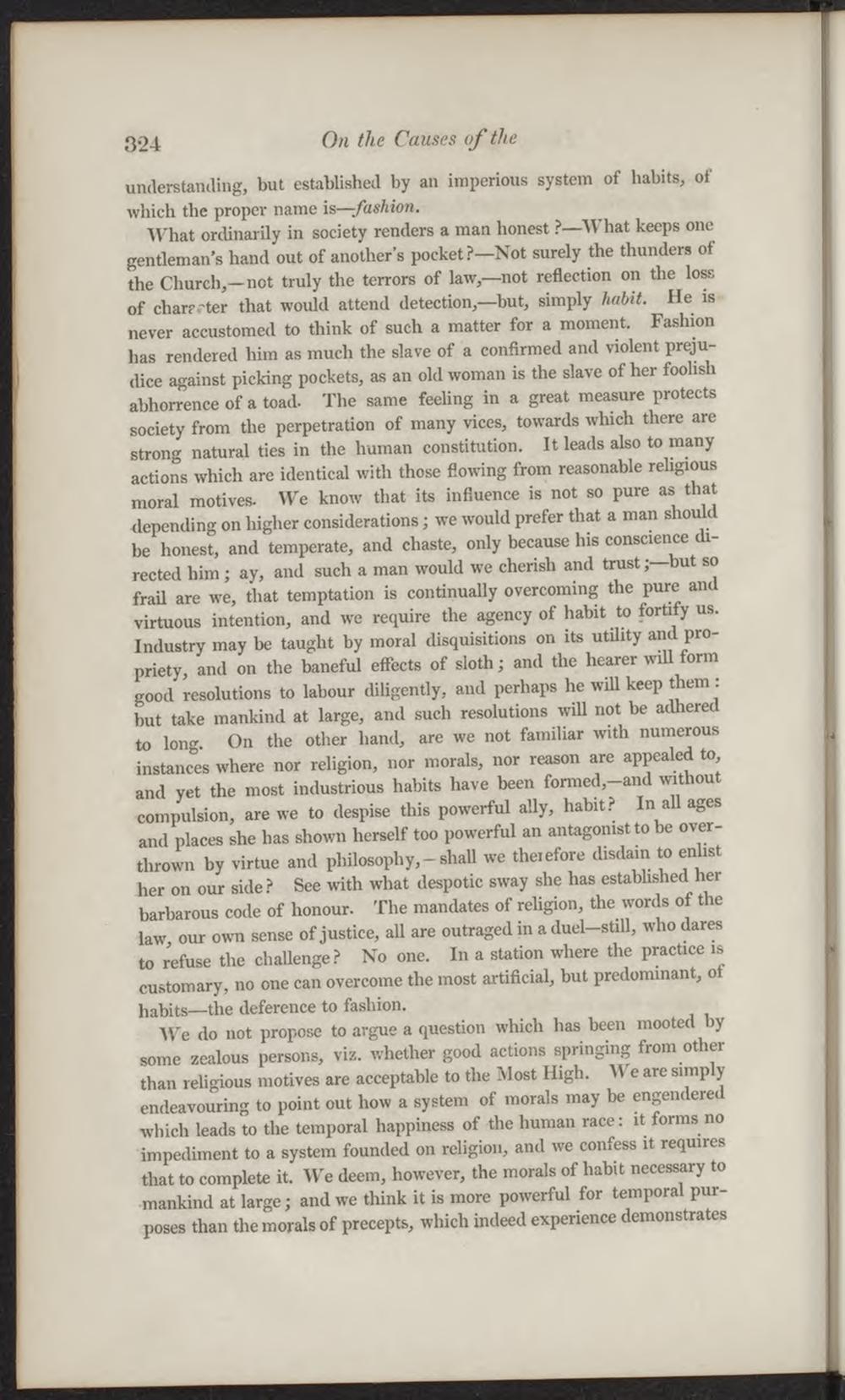 understanding, but established by an imperious system of habits, oi which the proper name is —fashion.

What ordinarily in society renders a man honest ?—What keeps one gentleman's hand out of another's pocket?—Not surely the thunders of the Church,—not truly the terrors of law,—not reflection on the loss of char? "ter that would attend detection,—but, simply habit. He is never accustomed to think of such a matter for a moment. Fashion has rendered him as mucli the slave of a confirmed and violent prejudice against picking pockets, as an old woman is the slave of her foolish abhorrence of a toad. The same feeling in a great measure protects society from the perpetration of many vices, towards which there are strong natural ties in the human constitution. It leads also to many actions which are identical with those flowing from reasonable religious moral motives. We know that its influence is not so pure as that depending on higher considerations; we would prefer that a man should be honest, and temperate, and chaste, only because his conscience directed him ; ay, and such a man would we cherisli and trustbut so frail are we, that temptation is continually overcoming the pure and virtuous intention, and we require the agency of habit to fortify us. Industry may be taught by moral disquisitions on its utüity and propriety, and on the baneful effects of sloth; and the hearer wül form good resolutions to labour diligently, and perhaps he will keep them : but take mankind at large, and such resolutions will not be adhered to long. On the other hand, are we not familiar with numerous instances where nor religion, nor morals, nor reason are appealed to and yet the most industrious habits have been formed,-and without compulsion, are we to despise this powerful ally, habit? In aU ages and places she has shown herself too powerful an antagonist to be overthrown by virtue and philosophy,-shall we theiefore disdain to enhst her on our side ? See with what despotic sway she has established her barbarous code of honour. The mandates of religion, the words of the law, our own sense of justice, all are outraged in a duel-still, wlio dares to refuse the challenge? No one. In a station where the practice 1» customary, no one can overcome the most artificial, but predominant, ot

We do not propose to argue a question which has been mootet )y some zealous persons, viz. whether good actions springing from other than religious motives are acceptable to the Most High. W e are simp y endeavouring to point out how a system of morals may be engendere which leads to the temporal happiness of the human race: it forms no impediment to a system founded on religion, and we confess it requires that to complete it. We deem, however, the morals of liabit necessary to mankind at large; and we think it is more powerful for temporal purposes than the morals of precepts, which indeed experience demonstrates