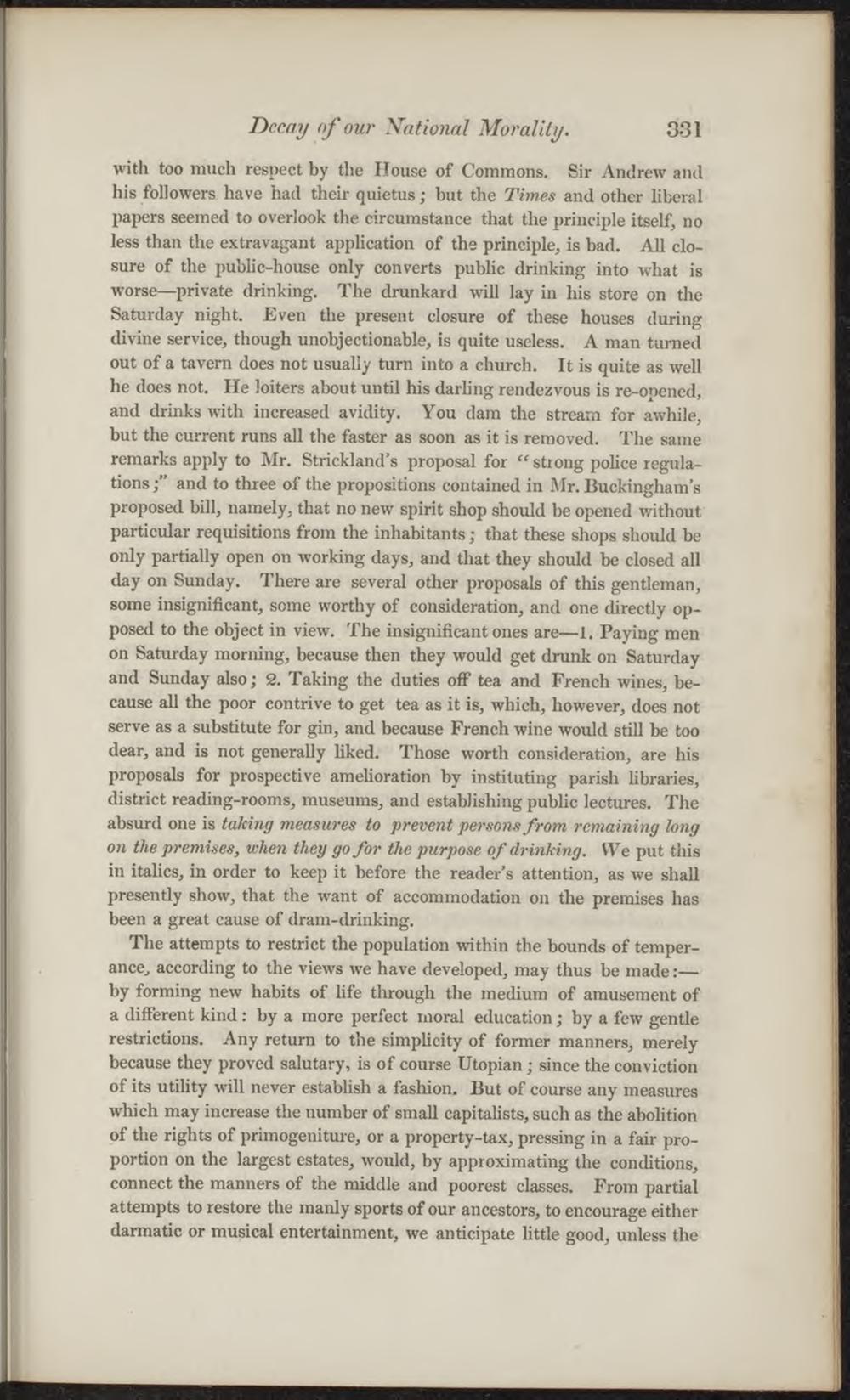 with too much respect by the House of Commons. Sir Andrew ancl his followers have had their quietus; but the Times and other liberal papers seemed to overlook the circumstance that the principle itself, 110 less than the extravagant application of the principle, is bad. All closure of the public-house only converts public drinking into what is worse—private drinking. The drunkard will lay in his store on the Saturday night. Even the present closure of these houses during divine service, though unobjectionable, is quite useless. A man turned out of a tavern does not usually turn into a church. It is quite as well he does not. He loiters about until his darling rendezvous is re-onened, and drinks with increased avidity. You dam the stream for awhile, but the current runs all the faster as soon as it is removed. The same remarks apply to Mr. Strickland's proposal for " strong police regulations;" and to three of the propositions contained in Mr. Buckingham's proposed bill, namely, that no new spirit shop should be opened without particular requisitions from the inhabitants; that these shops should be only partially open on working days, and that they should be closed all day on Sunday. There are several other proposals of this gentleman, some insignificant, some worthy of consideration, and one directly opposed to the object in view. The insignificant ones are—1. Paying men on Saturday morning, because then they would get drunk on Saturday and Sunday also; 2. Taking the duties off tea and French wines, because all the poor contrive to get tea as it is, which, however, does not serve as a substitute for gin, and because French wine would still be too dear, and is not generally liked. Those worth consideration, are his proposals for prospective amelioration by instiluting parish libraries, district reading-rooms, museums, and establishing public lectures. The absurd one is taking measures to prevent persons from remaining long on the premises, when they go for the purpose of drinking. We put this in italies, in order to keep it before the reader's attention, as we shall presently show, that the want of accommodation on the premises has been a great cause of dram-drinking.

The attempts to restrict the population within the bounds of temperanceJ according to the views we have developed, may thus be made:— by forming new habits of life through the medium of amusement of a different kind: by a more perfect moral education; by a few gentle restrictions. Any return to the simplicity of former manners, merely because they proved salutary, is of course Utopian; since the conviction of its utility will never establish a fashion. But of course any measures which may increase the number of small capitalists, such as the abolition of the rights of primogeniture, or a property-tax, pressing in a fair proportion on the largest estates, would, by approximating the conditions, connect the manners of the middle and poorest classes. From partial attempts to restore the manly sports of our ancestors, to encourage either darmatic or musical entertainment, we anticipate little good, unless the