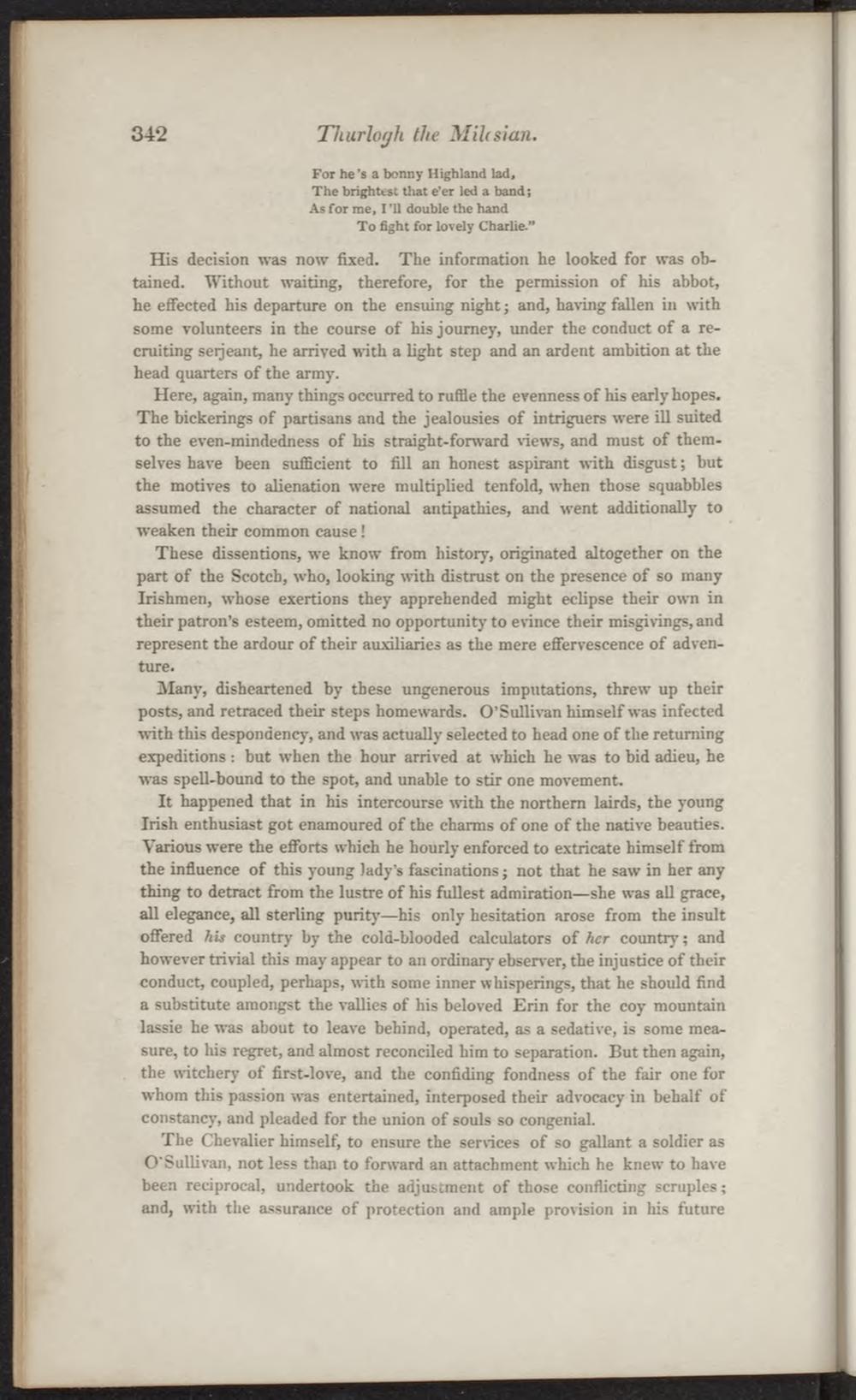 For he's a bonny Highland lad,

The brighttst that e'er led a band;

To fight for lovely Charlie."

His decision was now fixed. The information he looked for was obtained. Without waiting, therefore, for the permission of his abbot, he eflfected his departure on the ensuing night; and, ha ving fallen In with some volunteers in the course of his journey, under the conduct of a recruiting seijeant, he arrived with a light step and an ardent ambition at the head quarters of the army.

Here, again, many things occurred to ruffle the evenness of his early hopes. The bickerings of partisans and the jealousies of intriguers were ill suited to the even-mindedness of his straight-forward views, and must of themselves have been sufficiënt to fill an honest aspirant with disgust; but the motives to alienation were multiplied tenfold, when those squabbles assumed the character of national antipathies, and went additionally to weaken their common cause!

These dissentions, we know from history, originated altogether on the part of the Scotch, who, looking with distrust on the presence of so many Irishmen, whose exertions they apprehended might eclipse their own in their patron's esteem, omitted no opportunity to evince their misgivings, and represent the ardour of their auxiliaries as the mere effervescence of adventure.

Many, disheartened by these ungenerous iraputations, threw up their posts, and retraced their steps homewards. O'Sullivan himself was infected with this desponaency, and was actually selected to head one of the returning expeditions: but when the hour arrived at which he was to bid adieu, he was spell-bound to the spot, and unable to stir one movement.

It happened that in his intercourse with the northern lairds, the young Irish enthusiast got enamoured of the charms of one of the native beauties. Various were the efforts which he hourly enforced to extricate himself from the influence of this young Jady's fascinations; not that he saw in her any thing to detract from the lustre of his fullest admiration—she was all grace, all elegance, all sterling purity—his only hesitation arose from the insult offered his country by the cold-blooded calculators of her country; and however trivial this may appear to an ordinary ebserver, the injustice of their conduct, coupled, perhaps, with some inner whisperings, that he should find a substitute amongst the vallies of his beloved Erin for the coy mountain lassie he was about to leave behind, operated, as a sedative, is some measure, to liis regret, and almost reconciled him to separation. But then again, the witchery of first-love, and the confiding fondness of the fair one for whom this passion was entertained, interposed their advocacy in behalf of constancy, and pleaded for the union of souls so congenial.

The Chevalier himself, to ensure the services of so gallant a soldier as O'Sullivan, not less than to forward an attachment which he knew to have been reciprocal, undertook the adjustment of those conflicting scruples; and, with the assurance of protection and ample provision in his future