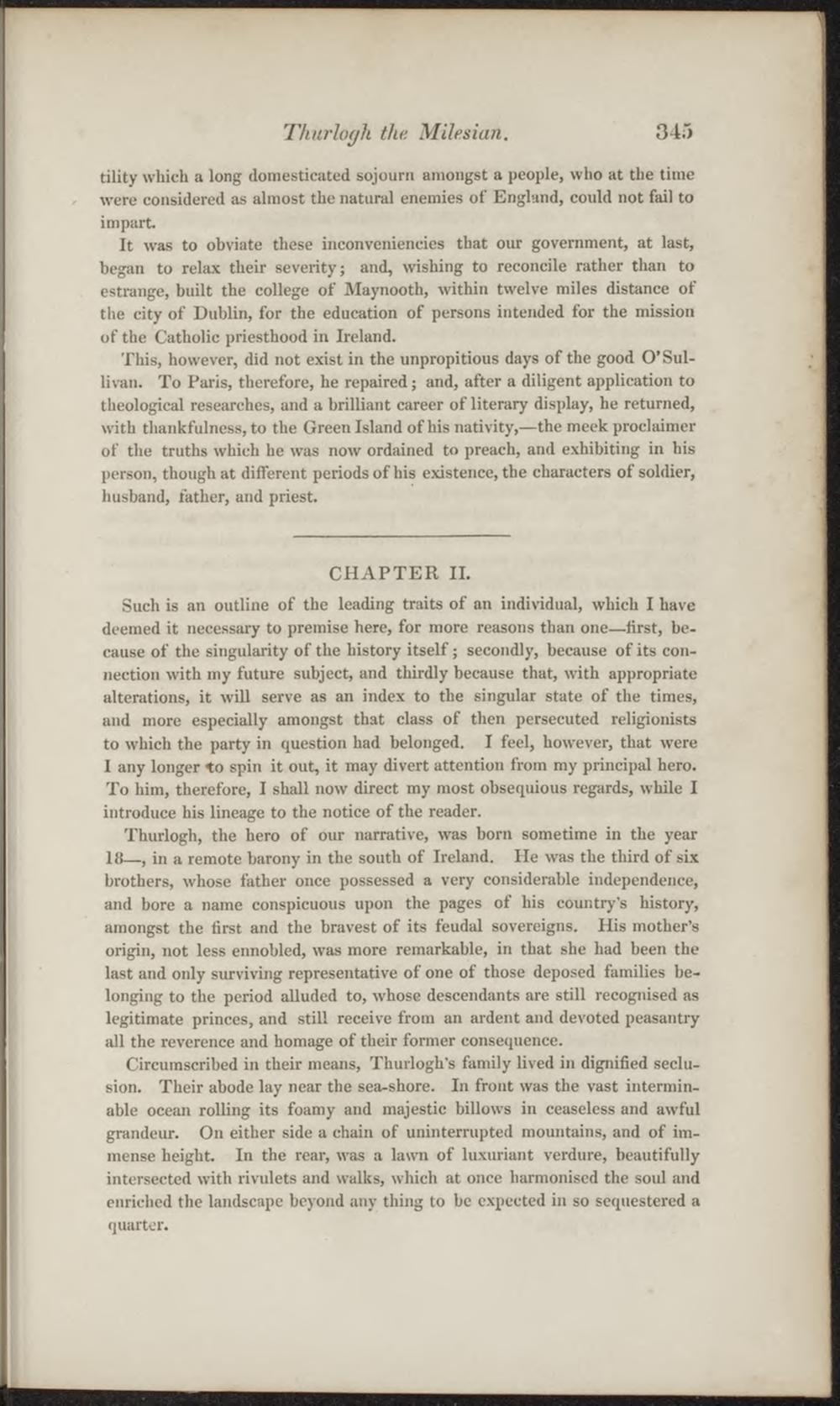 tility which a long domesticated sojourn amongst a people, who at the time were considered as almost the natural enemies of England, could not fail to impart.

It was to obviate these inconvenieneies tbat our government, at last, began to relax their severity; and, wishing to reeoncile rather than to estrange, built the college of Maynooth, within twelve miles distance of the city of Dublin, for the education of persons intended for the mission of the Catholic priesthood in Ireland.

This, however, did not exist in the unpropitious days of the good O'Sullivan. To Paris, therefore, he repaired; and, after a diligent application to theologieal researches, and a brilliant career of literary display, he returned, with thankfulness, to the Green Island of his nativity,—the meek proclaimer of the truths which he was now ordained to preach, and exhibiting in his person, though at different periods of his existence, the characters of soldier, husband, father, and priest.

Such is an outline of the leading traits of an individual, which I have deemed it necessary to premise here, for more reasons tban one—first, because of the singularity of the history itself; secondly, because of its connection with my future subject, and thirdly because that, with appropriate alterations, it will serve as an index to the singular state of the times, and more especially amongst that class of then persecuted religionists to which the party in question had belonged. I feel, however, that were I any longer to spin it out, it may divert attention from my principal hero. To him, therefore, I shall now direct my most obsequious regards, while I introducé his lineage to the notice of the reader.

Thurlogh, the hero of our narrative, was born sometime in the year 18—, in a remote barony in the south of Ireland. He was the third of six brothers, whose father once possessed a very considerable independence, and bore a name conspicuous upon the pages of his country's history, amongst the first and the bravest of its feudal sovereigns. His mother's origin, not less ennobled, was more remarkable, in that she had been the last and only surviving representative of one of those deposed families belonging to the period alluded to, whose descendants are still recognised as legitimate princes, and still receive from an ardent and devoted peasantry all the reverence and homage of their former consequence.

Circumscribed in their means, Thuilogh's family lived in dignified seclusion. Their abode lay near the sea-shore. In front was the vast interminable ocean rolling its foamy and majestic billows in ceaseless and awful grandeur. On either side a chain of uninterrupted mountains, and of immense height. In the rear, was a lawn of luxuriant verdure, beautifully intersected with rivulets and walks, which at once harmonised the soul and enriched the landscape beyond any thing to be expected in so sequestered a quarter.