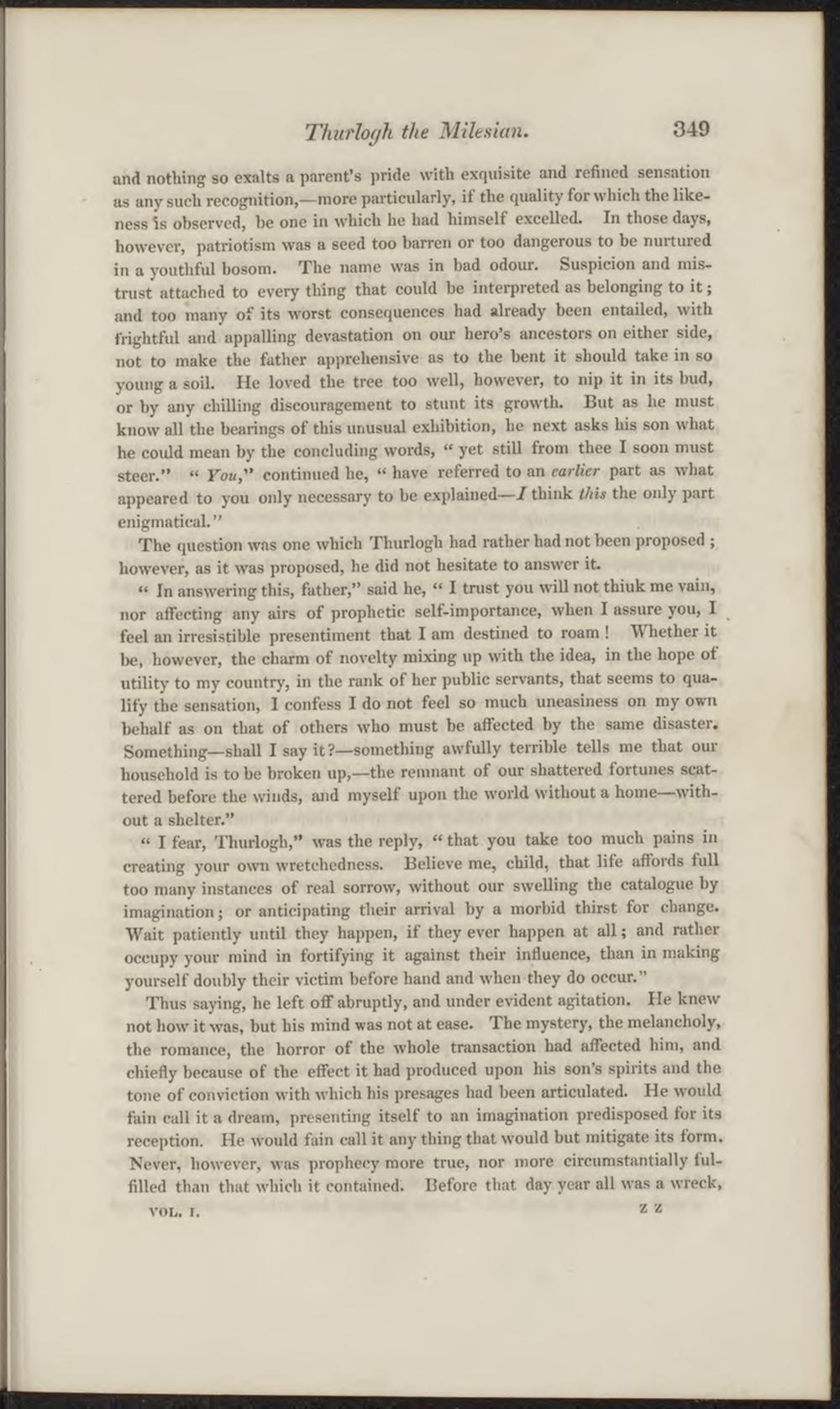 and nothing so exalts a parent's pride with exquisite and refincd sensation as any such recognition,—more particularly, if the quality for which the likeness ïs observedj be one in which he had himself excelled. In those days, however, patriotism was a seed too harren or too dangerous to he nurtured in a youtliful bosom. The name was in bad odour. Suspicion and mistrust attached to every thing that could be interpreted as belonging to it; and too many of its worst consequences had already been entailed, with frightful and appalling devastation on our hero's ancestors on either side, not to make the father appreliensive as to the bent it should take in so young a soil. He loved the tree too well, however, to nip it in its bud, or by any chilling discouragement to stunt its growth. But as he must know all the hearings of this unusual exliibition, he next asks his son what he could mean by the conciuding words, " yet still from thee I soon must steer." " You," continued he, " have referred to an earlier part as what appeared to you only necessary to be explained—I think this the only part enigmatical."

The question was one which Thurlogh had rather had not been proposed ; however, as it was proposed, he did not hesitate to answer it.

" In answering this, father," said he, " I trust you will not thiuk me vain, nor affecting any airs of prophetic self-importance, when I assure you, I feel an irresistible presentiment that I am destined to roam ! Whether it be, however, the charm of novelty mixing up with the idea, in the hope of utility to my country, in the rank of her public servants, that seems to qualify the sensation, I confess I do not feel so much uneasiness on my own behalf as on that of others who must be affected by the same disaster. Something—shall I say it ?—something awfully terrible tells me that our liousehold is to be broken up,—the reninant of our shattered fortunes scattered before the winds, and myself upon the world without a home without a shelter."

" I fear, Thurlogh," was the reply, " that you take too much pains in creating your owti wretchedness. Believe me, child, that life affords full too many instances of real sorrow, without our swelling the catalogue by imagination; or anticipating their arrival by a morbid thirst for change. Wait patiently until they happen, if they ever happen at all; and rather occupy your mind in fortifying it against their influence, than in making yourself doubly their victim before hand and when they do oecur."

Thus saying, he left off abruptly, and under evident agitation. He knew not how it was, but his mind was not at ease. The mystery, the melancholy, the romance, the horror of the whole transaction had affected him, and ehiefly because of the effect it had produced upon his son's spirits and the tone of conviction with which his presages had been articulated. He would fain call it a dream, presenting itself to an imagination predisposed for its reception. He would fain call it any thing that would but mitigate its form. Never, however, was prophecy more true, nor more cireumstantially fulfilled than that which it contained. Before that day year all was a wreek,