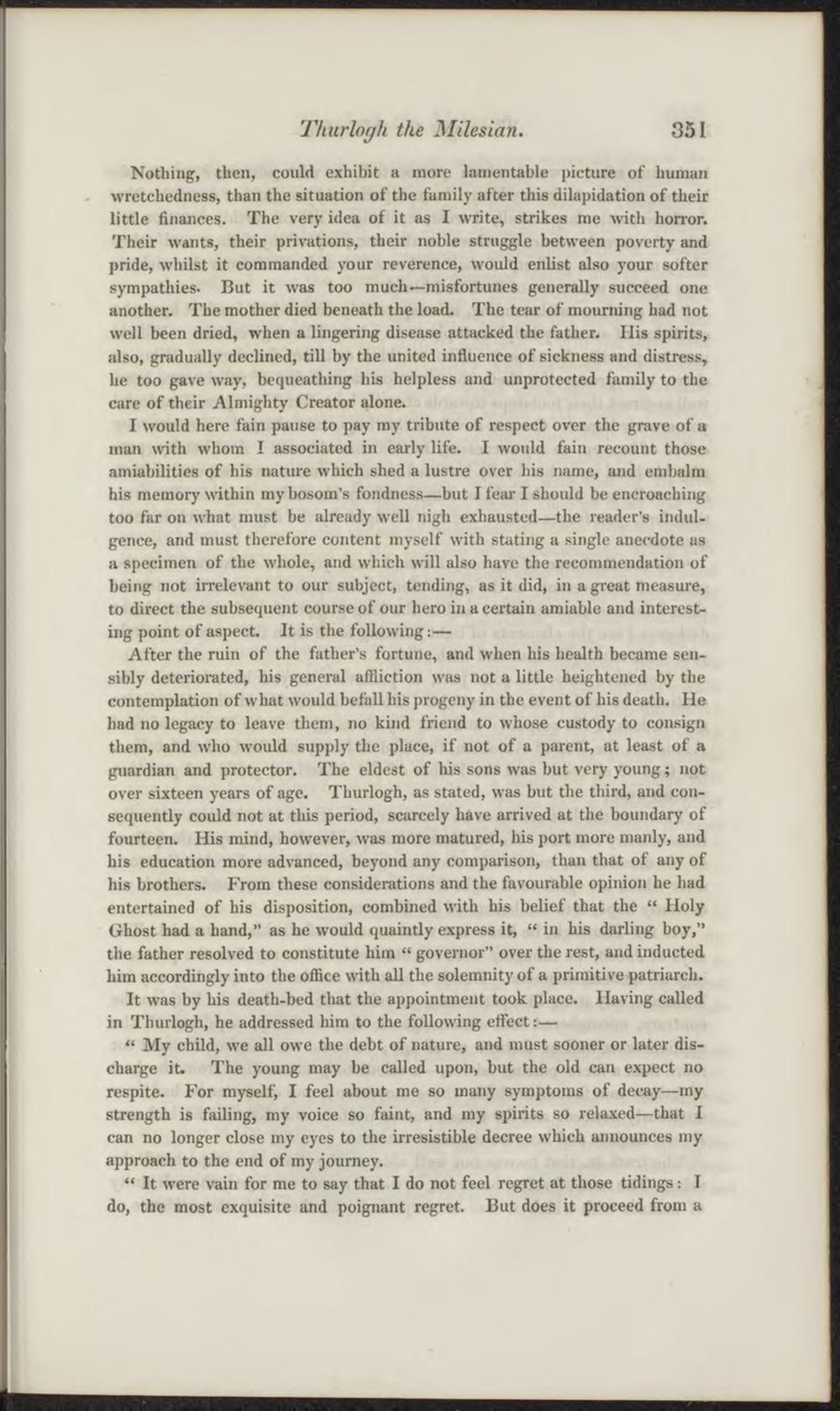 Nothing, then, could exhibit a more lamentable picture of human wretchedness, than the situation of the family after this dilapidation of their little finances. The very idea of it as I vvrite, strikes me with horror. Their wants, their privations, their noble struggle between poverty and pride, whilst it commanded your reverence, would enlist also your softer sympathies. But it was too much—misfortunes generally succeed one another. The mother died beneath the load. The tear of mourning had not well been dried, when a lingering disease attacked the father. Ilis spirits, also, gradually declined, till by the united influence of sickness and distress, lie too gave way, bequeathing his helpless and unprotected family to the care of their Almighty Creator alone.

I would here fain pause to pay my tribute of respect over the grave of a man with whom I associated in early life. I would fain recount those amiabilities of his nature which shed a lustre over his name, and embalm his memory within my bosom's fondness—but I fear I should be encroaching too far on what must be already well nigh exhausted—the reader's indulgence, and must therefore content myself with stating a single anecdote as a specimen of the whole, and which will also have the recommendation of being not irrelevant to our subject, tending, as it did, in a great measure, to direct the subsequent course of our hero in a certain amiable and interesting point of aspect. It is the following:—

After the ruin of the father's fortune, and when his health became sensibly deteriorated, his general afïliction was not a little heightened by the contemplation of what would befall his progeny in the event of his death. He had no legacy to leave them, no kind friend to whose custody to consign them, and who would supply the place, if not of a parent, at least of a guardian and protector. The eldest of his sons was but very young; not over sixteen years of age. Thurlogh, as stated, was but the third, and consequently could not at this period, scarcely have arrived at the boundary of fourteen. His mind, however, was more matured, his port more manly, and his education more advanced, beyond any comparison, than that of any of his brothers. From these considerations and the favourable opinion he had entertained of his disposition, combined with his belief that the " Holy Ghost had a hand," as he would quaintly express it, " in his darling boy," the father resolved to constitute him " governor" over the rest, and inducted him accordingly into the office with all the solemnity of a primitive patriarch.

It was by his death-bed that the appointment took place. Having called in Thurlogh, he addressed him to the following effect:—

" My child, we all owe the debt of nature, and must sooner or later discharge it. The young may be called upon, but the old can expect no respite. For myself, I feel about me so inany symptoms of decay—my strength is failing, my voice so faint, and my spirits so relaxed—that I can no longer close my eyes to the irresistible decree which announces my approach to the end of my journey.

" It were vain for me to say that I do not feel regret at those tidings: I do, the most exquisite and poignant regret. But does it proceed from a