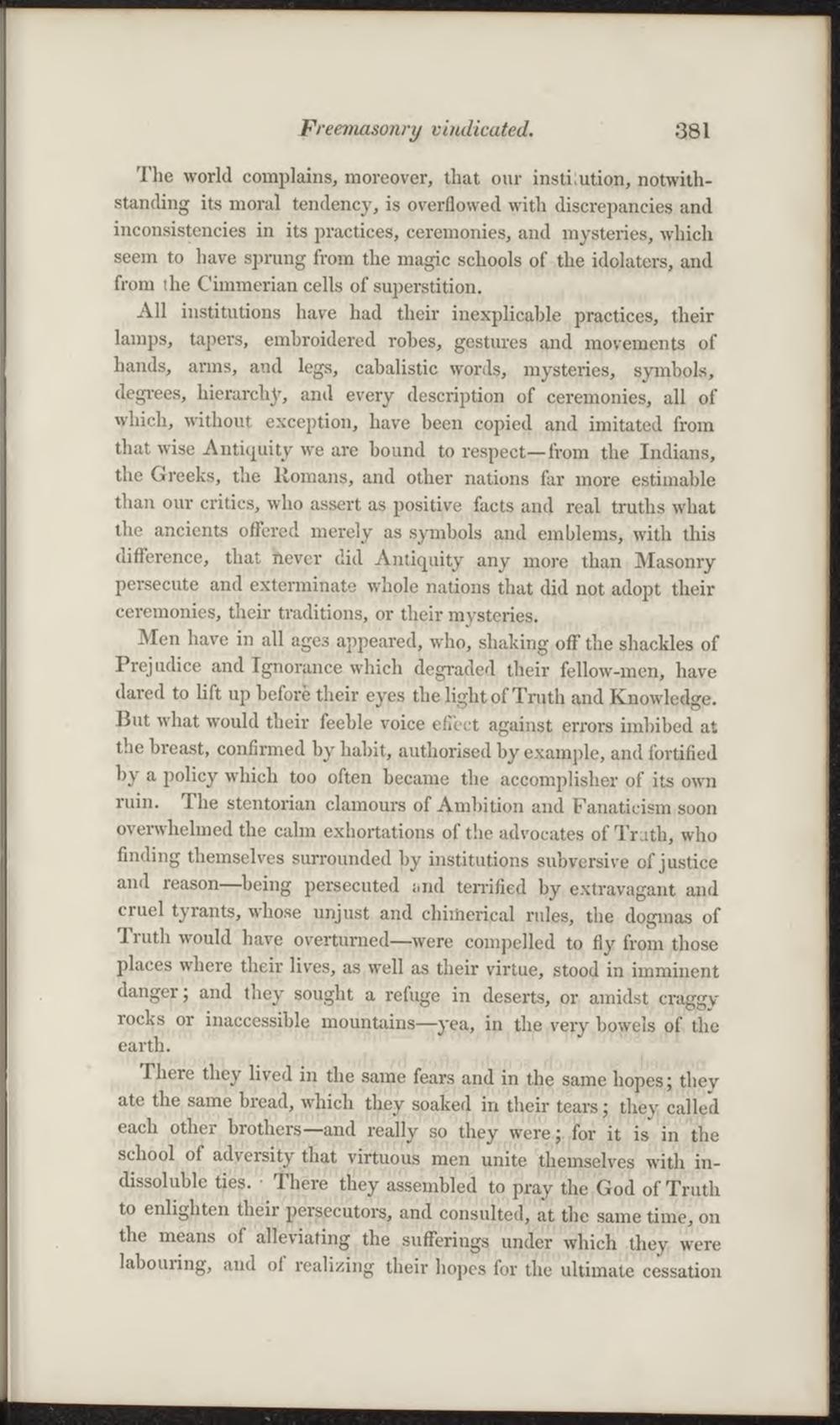 The world complains, moreover, that our insti;ution, notwithstanding its moral tendency, is overflowed with discrepancies and inconsistencies in its practices, ceremonies, and mysteries, wliich seem to have sprung from the magie schools of the idolaters, and fïom the Cimmerian cells of superstition.

All iustitutions have had their inexplicable practices, their lamps, tapers, embroidered robes, gestures and movements of hands, arms, and legs, cabalistic words, mysteries, symbols, degrees, hierarchy, and every description of ceremonies, all of wliich, without exception, have been copied and imitated from that wise Antiquity we are bound to respect—from the Indians, the Greeks, the liomans, and other nations far more estimable than our critics, wlio assert as positive facts and real truths what the ancients offered merely as symbols and emblems, with this difference, that ïiever did Antiquity any more than Masonry persecute and exterminate whole nations that did not adopt their ceremonies, their traditions, or their mysteries.

Men have in all ages appeared, who, shaking off the shackles of Prejudice and Ignorance which degraded their fellow-men, have dared to lift up beforè their eyes the light of Truth and Knowledge. But what would their feeble voice effect against errors imbibed at the breast, confirmed by habit, authorised by example, and fortified by a policy which too often became the accomplisher of its own ruin. The stentorian clamours of Ambition and Fanaticism soon overwhelmed the calm exhortations of t!ie advocates of Truth, who finding themselves surrounded by institutions subversive of justice and reason—being persecuted and terrified by extravagant and cruel tyrants, wliose unjust and chiinerical rules, the dogmas of Iruth would have overturned—were compelled to fly from those places where their lives, as well as their virtue, stood in imminent danger; and they sought a refuge in deserts, or amidst craggy rocks or inaccessible mountains—yea, in the very bowels of the earth.

fhere they lived in the same fears and in the same hopes; they ate the same bread, which they soaked in their tears; they called each other brothers—and really so they were; for it is in the school of adversity that virtuous men unite themselves with indissoluble ties. ■ There they assembled to pray the God of Truth to enlighten their persecutors, and consulted, at the same time, on the means of alleviating the sufferings under which they were labouring, and of realizing their hopes for the ultimate cessation