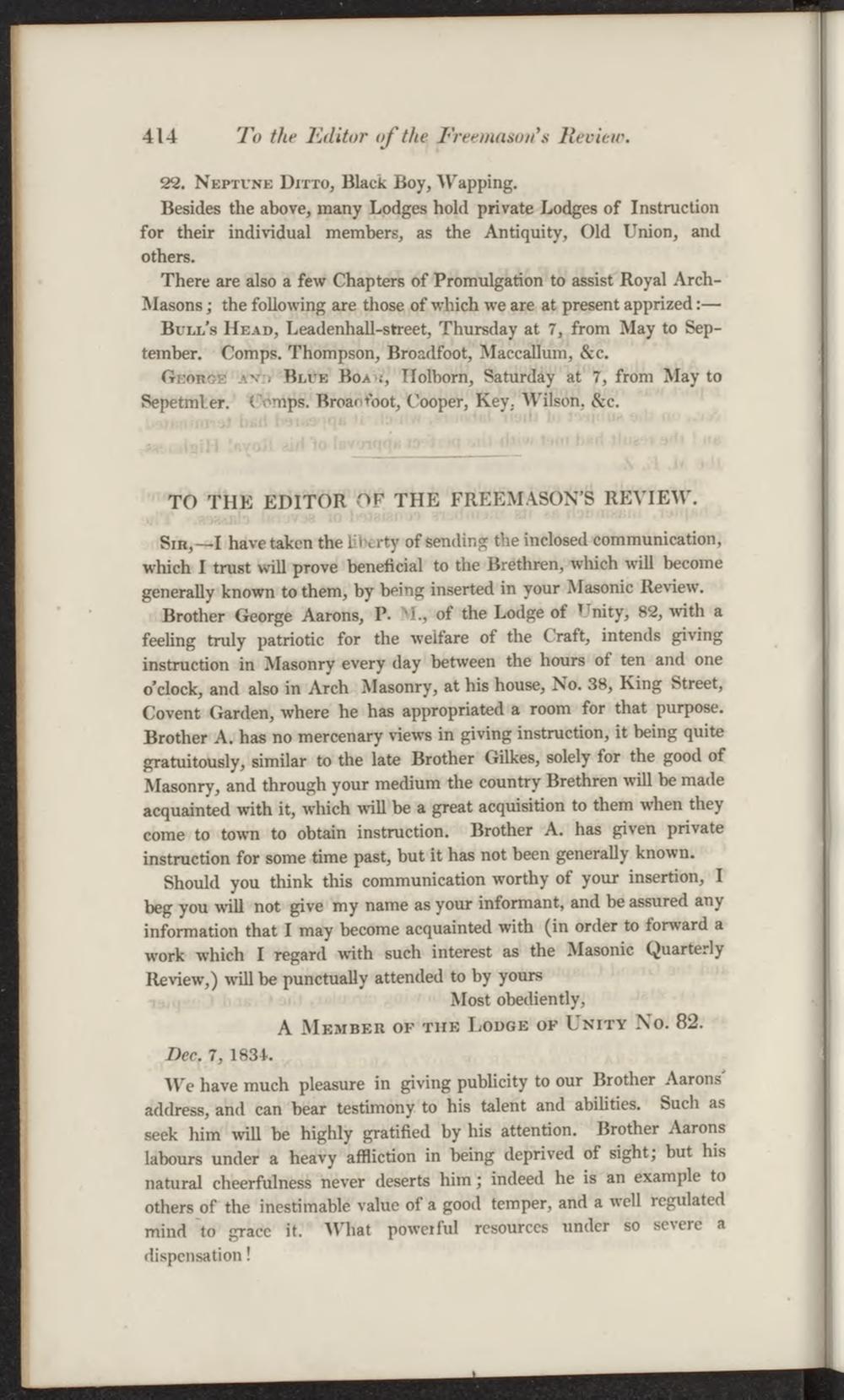 Besides the above, many Lodges hold private Lodges of Instruction for their individual members, as the Antiquity, Old Union, and others.

There are also a few Chapters of Promulgation to assist Royal ArchMasons; the following are those of which we are at present apprized:—

Bull's He ad, Leadenhall-street, Thursday at 7, from May to September. Comps. Thompson, Broadfoot, Maccallum, &c.

TO THE EDITOR OF THE FREEMASON'S REVIEW.

Sih,—I have taken the lit-erty of sending the inclosed communication, which I trust will prove beneficial to the Brethren, which will become generally known to them, by being inserted in your Masonic Review.

Brother George Aarons, P. 'K, of the Lodge of ' nity, 82, with a feeling truly patriotic for the welfare of the Craft, intends giving instruction in Masonry every day between the hours of ten and one o'clock, and also in Arch Masonry, at his house, No. 38, King Street, Covent Garden, where he has appropriated a room for that purpose. Brother A. has no mercenary views in giving instruction, it being quite gratuitously, similar to the late Brother Gilkes, solely for the good of Masonry, and through your medium the country Brethren will be made acquainted with it, which will be a great acquisition to them when they come to town to obtain instruction. Brother A. has given private instruction for some time past, but it has not been generally known.

Should you think this communication worthy of your insertion, I beg you will not give my name as your informant, and be assured any information that I may become acquainted with (in order to forward a work which I regard with such interest as the Masonic Quarterly Review,) will be punctually attended to by yours

We have much pleasure in giving publicity to our Brother Aarons address, and can bear testimony to his talent and abilities. Such as seek him will be highly gratified by his attention. Brother Aarons labours under a heavy affliction in being deprived of sight; but his natural cheerfulness never deserts him; indeed he is an example to others of the inestimable value of a good temper, and a well regulated mind to grace it. Wliat poweiful resources under so severe a dispensation!