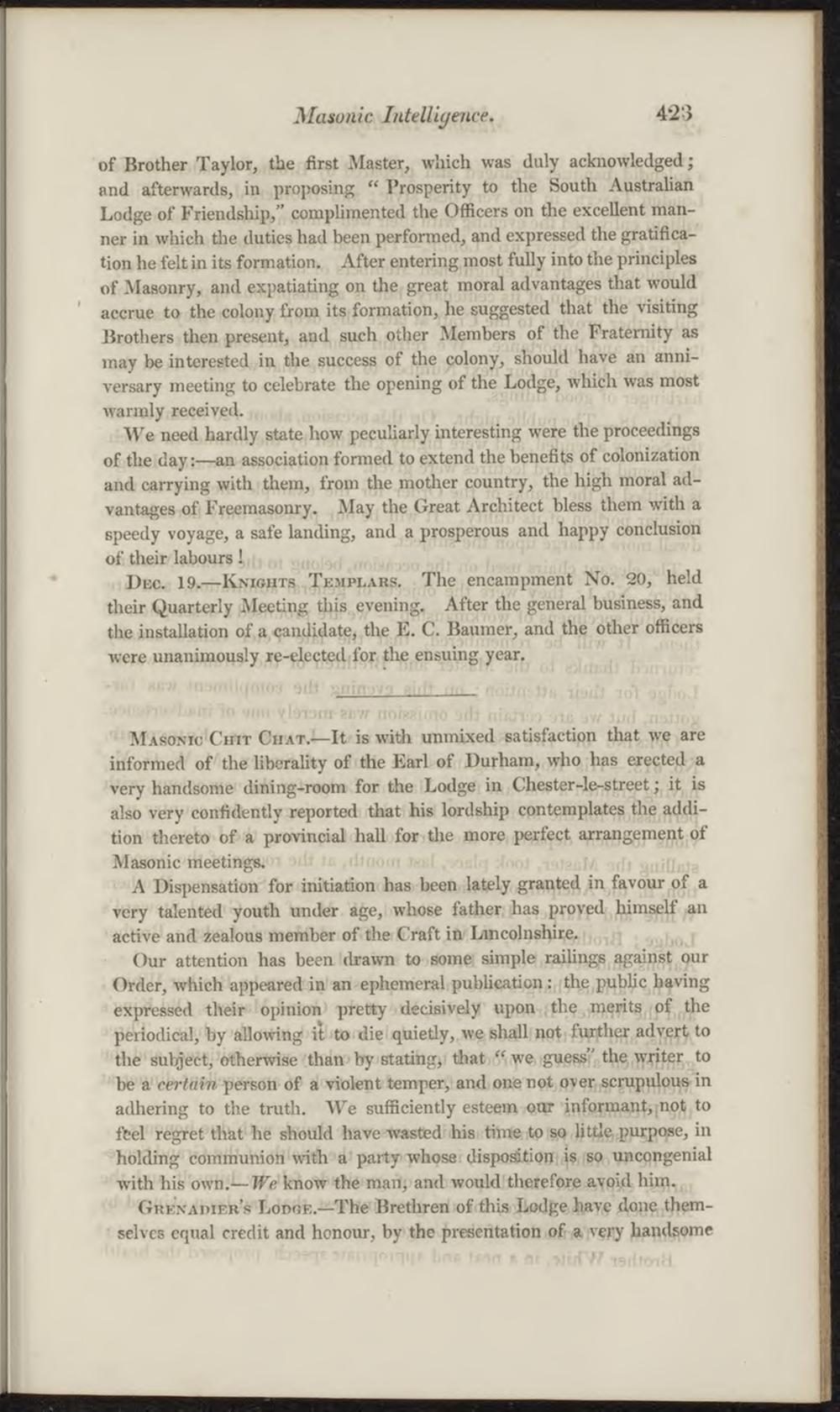 of Brother Taylor, the first Master, which was (lu!y acknowledged; and afterwards, in proposing " Prosperity to the South Australian Lodge of Friendship," complimented the Officers on the excellent manner in which the duties had been performed, and expressed the gratification he feit in its formation. After entering most fully into the principles of Masonry, and expatiating on the great moral advantages that would accrue to the colony from its formation, he suggested that the visiting Brothers then present, and such other Members of the Fraternity as may be interested in the success of the colony, should have an anniversary meeting to celebrate the opening of the Lodge, which was most warmly received.

We need hardly state how peculiarly interesting were the proceedings of the day:—an association formed to extend the benefits of colonization and carrying with them, from the mother country, the high moral advantages of Freemasonry. May the Great Architect bless them with a speedy voyage, a safe landing, and a prosperous and happy conclusion of their labours!

Dec. 19.—Knigiits Templars. The encampment No. 20, held their Quarterly Meeting this evening. After the general business, and the installation of a candidate, the E. C. Baumer, and the other officers were unanimously re-elected for the ensuing year.

Masonic Chit Chat.—It is with unmixed satisfaction that we are informed of the liberality of the Earl of Durham, who has erected a very handsome dining-room for the Lodge in Chester-le-street; it is also very confidently reported that his lordship contemplates the addition thereto of a provincial hall for the more perfect arrangement of Masonic meetings.

A Dispensation for initiation has been lately granted in favour of a very talented youth under age, whose father has proved himsell an active and zealous member of the Craft in Lmcolnshire.

Our attention has been drawn to some simple railings against our Order, which appeared in an ephemeral publication : the public having expressed their opinion pretty decisively upon the merits of the periodical, by allowing it to die quietly, we shall not further advert to the subject, otherwise than by stating, that "we guess" the writer to be a certain person of a violent temper, and one not over scrupulous in adhering to the truth. AVe sufficiently esteem our informant, not to fcel regret that he should have wasted his time to so little purpose, in holding communion with a party whose disposition is so uncongenial with his own.— We know the man, and would therefore avoid him.

Grenadiers Lodge.—The Brethren of this Lodge have done themselvcs equal credit and honour, by the presentation of a very handsome