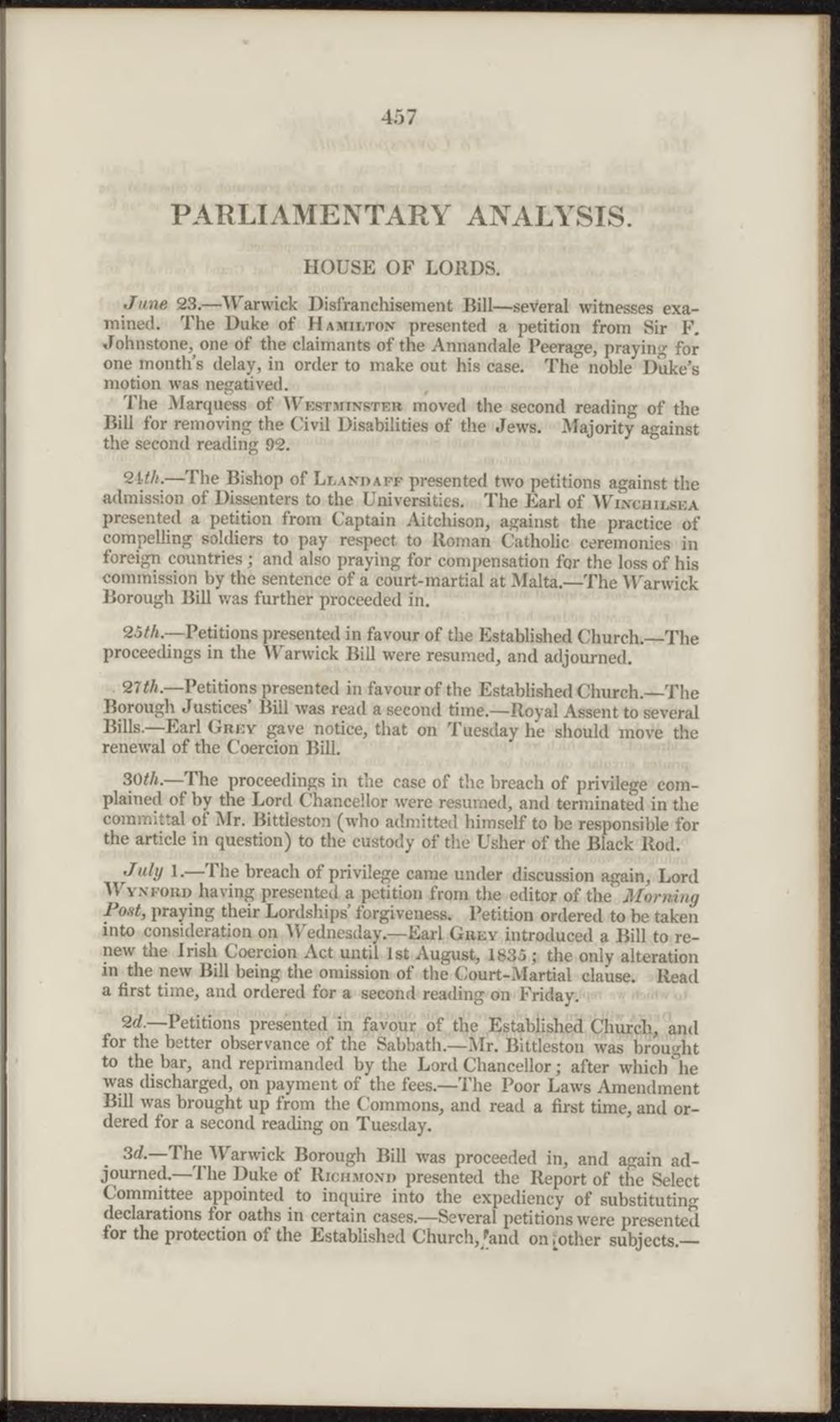 June 23.—Warwick Disfranchisement Bill—several witnesses examined. The Duke of Hamilton presented a petition from Sir F. Johnstone,one of the claimants of the Annandale Peerage, praying for one month's delay, in order to make out his case. The noble Duke's motion was negatived.

2ith.—The Bishop of Llandaff presented two petitions against the admission of Dissenters to the Universities. The Earl of WiVchilsea presented a petition from Captain Aitchison, against the practice of compelling soldiers to pay respect to Roman Catholic ceremonies in foreign countries ; and also praying for compensation for the loss of his commission by the sentence of a court-martial at Malta.—The Warwick Borough Bill was further proceeded in.

25t/i.—Petitions presented in favour of the Established Church.—The proceedings in the Warwick Bill were resumed, and adjourned.

27th.—Petitions presented in favour of the Established Church.—The Borough Justices' Bill was read a second time.—Royal Assent to several Bills.—Earl Grey gave notice, that on Tuesday he should move the renewal of the C'oercion Bill.

30th.—The proceedings in the case of the breach of privilege complained of by the Lord Chance'.lor were resumed, and terminated in the committal of jVIr. Bittleston (who admitted himself to be responsible for the article in question) to the custody of the Usher of the Black Rod.

July 1.—The breach of privilege came under discussion again, Lord Wynford having presented a petition from the editor of the Morning Post, praying their Lordships' forgiveness. Petition ordered to be taken mto consideration on Wednesday.—Earl Grey introduced a Bill to renew the Irish Coercion Act until Ist August, 1835; the only alteration in the new Bill being the omission of the Court-Martial clause. Read a first time, and ordered for a second reading on Friday.

2d.—Petitions presented in favour of the Established Church, and for the better observance of the Sabbath.—Mr. Bittleston was brought to the bar, and reprimanded by the Lord Chancellor; after which °he was discharged, on payment of the fees.—The Poor Laws Amendment Bill was brought up from the Commons, and read a first time, and ordered for a second reading on Tuesday.

3^- The Warwick Borough Bill was proceeded in, and again adjourned.—The Duke of Richmond presented the Report of the Select Committee appointed to inquire into the expediency of substituting declarations for oaths in certain cases.—Several petitions were presented tor the protection of the Established Church, 'and on £other subjects.—