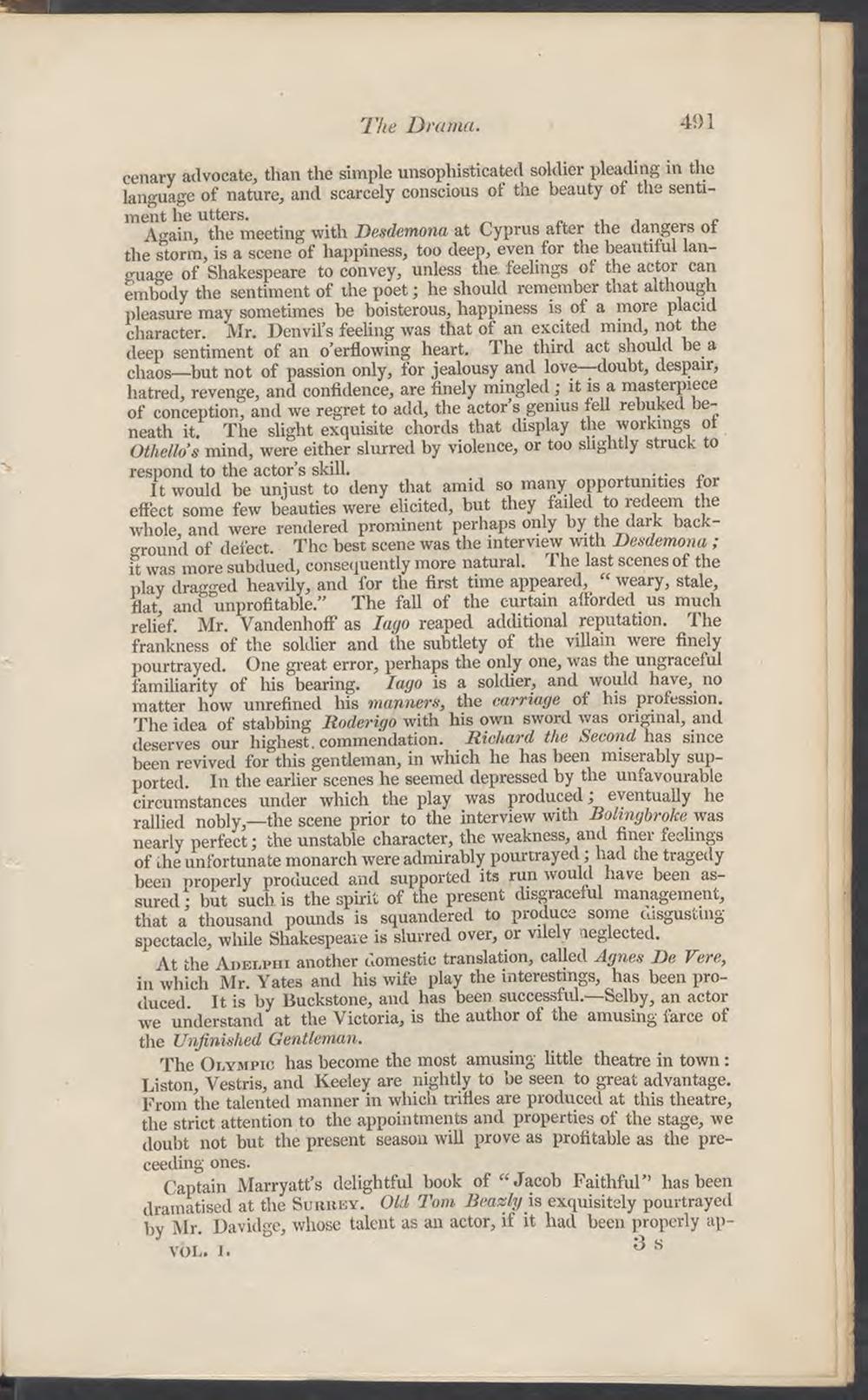 cenary advocate, than the simple unsöphisticated soldier pleading in the language of nature, and scarcely conscious of the beauty of the sentiment he utters. ^ „ Again, the meeting with Desdemonci at Cyprus after the dangers ot the storm, is a scene of liappiness, too deep, even for the beautif ul language of Shakespeare to convey, unless the, feelings ol the act(?r can embody the sentiment of the poet; he should remember tnat although pleasure may sometimes be boisterous, happiness is of a more placid character. Mr. Denvil's feeling was that of an excited mind, not the deep sentiment of an o'erflowing heart. Ihe third act should be a chaos—but not of passion only, for jealousy and love—doubt, despair, hatred, revenge, and confldence, are finely mingled; it is a masterpiece of conception, and we regret to add, the actor's genius feil rebuked beneath it. The slight exquisite chords that display the workmgs ot Othello's mind, were either slurred by violence, or too shghtly struck to

respond to the actor's skill.

Itwould be uniust to deny that amul so many opportumties for effect some few beauties were elicited, but they failed to redeem the whole and were rendered prominent perhaps only by the dark back eround of defect. The best scene was the interview with Desdemona; ft was more subdued, consequently more natural. The last scenes of the play dra""red heavily, and for the first time appeared, " weary, stale, flat, and unprofitable." The fall of the curtain aiforded us much relief. Mr. Vandenhoff as lugo reaped additional reputation. The frankness of the soldier and the subtlety of the villain were finely pourtrayed. One great error, perhaps the only one, was the ungraceful familiarity of his bearing. Iago is a soldier, and would have, no matter how unrefined his marmers, the carriage of bis profession. The idea of stabbing Roderigo with his own sword was origmal, and deserves our highest. commendation. Richard the Second has since been revived for this gentleman, in which he has been miserably supported. In the earlier scenes he seemed depressed by the unfavourable circumstances under which the play was produced; eventually he rallied nobly,—the scene prior to the interview with Bolingbroke was nearly perfect; the unstable character, the weakness, and finer feelings of the unfortunate monarch were admirably pourtrayed; had the tragedy been properly produced and supported its run would have been assured : but suchis the spirit of the present disgraceful management, that a thousand pounds is squandered to produce some cüsgusting spectacle, while Shakespeare is slurred over, or vilelv neglected.

At the Ai>ioiji*n i another domestic translation, caUed Agnes De Vere, in which Mr. Yates and his wife play the interestmgs, has been produced. It is by Buckstone, and has been successful.—Selby, an actor we understand at the Victoria, is the author of the amusing ferce of the Unfinished Gentleman.

The Olympic has become the most amusing little theatre in town: Liston, Vestris, and Keeley are nightly to be seen to great advantage. Froin the talented manner in which trifles are produced at this theatre, the strict attention to the appointments and properties of the stage, we doubt not but the present season will prove as profitable as the preceeding ones.

Captain Marryatt's delightful book of "Jacob Faithful" has been dramatised at the Sumiey. OU Tom Beazly is exquisitely pourtrayed by Mr. Davidge, whose talent as an actor, if it had been properly ap-