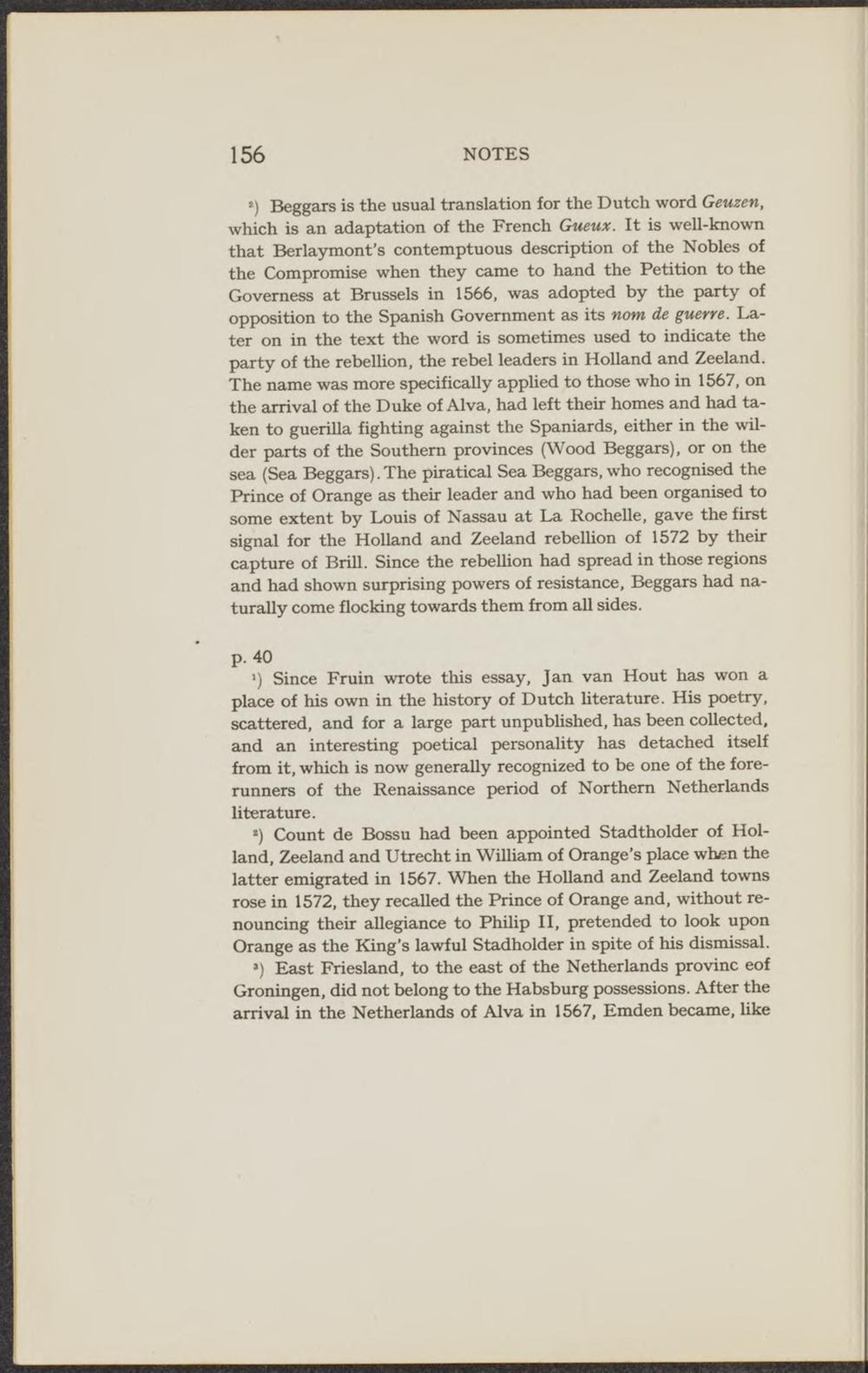 ») Beggars is the usual translation for the Dutch word Geuzen, which is an adaptation of the French Gueux. It is well-known that Berlaymont's contemptuous description of the Nobles of the Compromise when they came to hand the Petition to the Govemess at Brussels in 1566, was adopted by the party of opposition to the Spanish Government as its nom de guerre. Later on in the text the word is sometimes used to indicate the party of the rebellion, the rebel leaders in Holland and Zeeland. The name was more specifically appüed to those who in 1567, on the arrival of the Duke of Alva, had left their homes and had taken to guerilla f ighting against the Spaniards, either in the wilder parts of the Southern provinces (Wood Beggars), or on the sea (Sea Beggars).The piratical Sea Beggars, who recognised the Prince of Orange as their leader and who had been organised to some extent by Louis of Nassau at La Rochelle, gave the first signal for the Holland and Zeeland rebellion of 1572 by their capture of Brill. Since the rebellion had spread in those regions and had shown surprising powers of resistance, Beggars had naturally come flocking towards them from all sides.

») Since Fruin wrote this essay. Jan van Hout has won a place of his own in the history of Dutch literature. His poetry, scattered, and for a large part unpublished, has been collected, and an interesting poetical personality has detached itself from it, which is now generally recognized to be one of the forerunners of the Renaissance period of Northern Netherlands literature.

•) Count de Bossu had been appointed Stadtholder of Holland, Zeeland and Utrecht in William of Orange's place when the latter emigrated in 1567. When the Holland and Zeeland towns rose in 1572, they recalled the Prince of Orange and, without renouncing their allegiance to Philip II, pretended to look upon Orange as the King's lawful Stadholder in spite of his dismissal.

*) East Friesland, to the east of the Netherlands provinc eof Groningen, did not belong to the Habeburg possessions. After the arrival in the Netherlands of Alva in 1567, Emden became, like