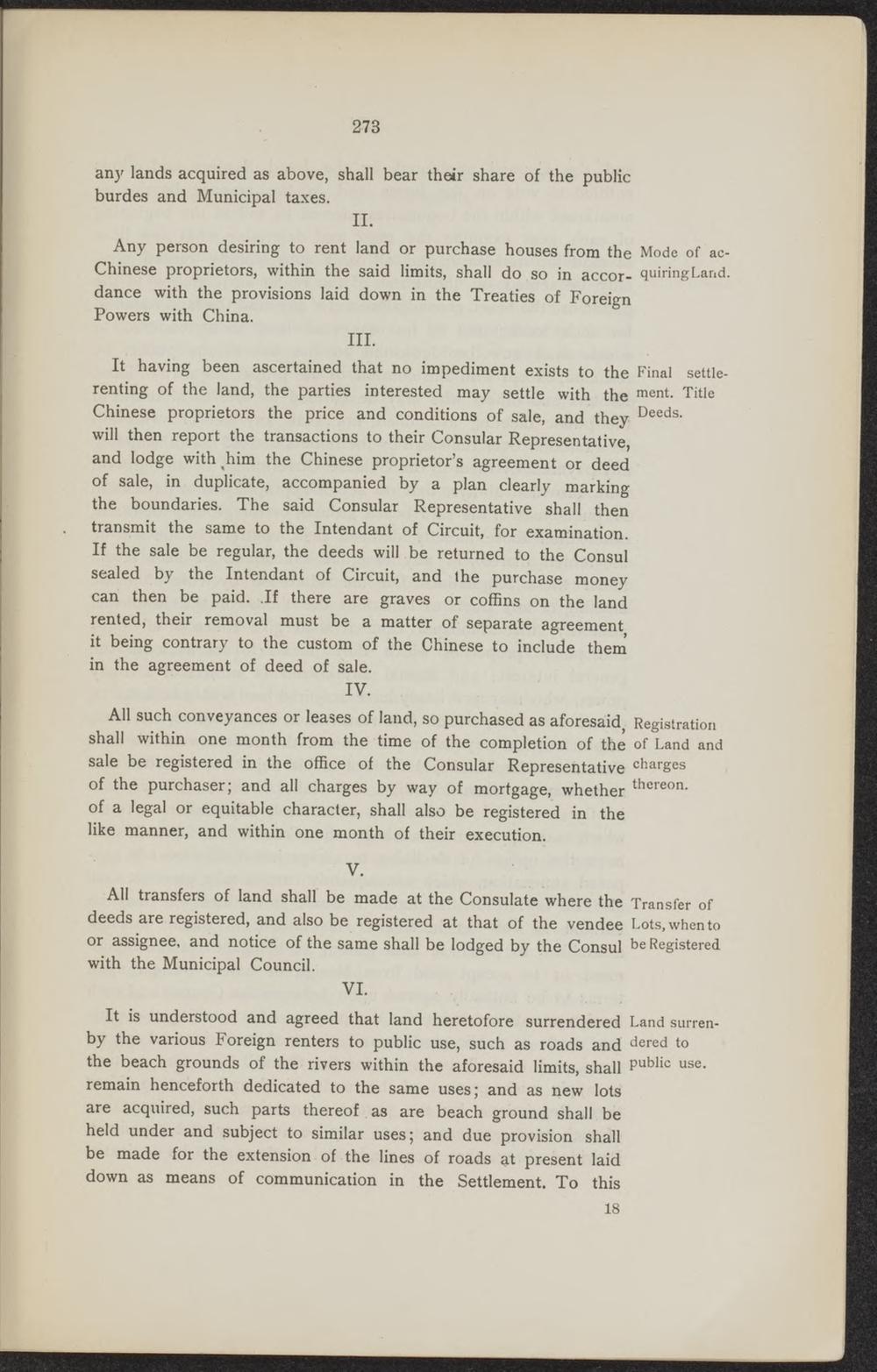 an)' lands acquired as above, shall bear their share of the public burdes and Municipal taxes.

Any person desiring to rent land or purchase houses from the Mode of acChinese proprietors, within the said limits, shall do so in accor- quiringLand. dance with the provisions laid down in the Treaties of Foreign Powers with China.

It having been ascertained that no impediment exists to the Final settlerenting of the land, the parties interested may settle with the ment- Title Chinese proprietors the price and conditions of sale, and they Deedswill then report the transactions to their Consular Representative and lodge with him the Chinese proprietor's agreement or deed of sale, in duplicate, accompanied by a plan clearly marking the boundaries. The said Consular Representative shall then transmit the same to the Intendant of Circuit, for examination. If the sale be regular, the deeds will be returned to the Consul sealed by the Intendant of Circuit, and Ihe purchase money can then be paid. .If there are graves or coffins on the land rented, their removal must be a matter of separate agreement it being contrary to the custom of the Chinese to include them in the agreement of deed of sale.

All such conveyances or leases of land, so purchased as aforesaid, Registration shall within one month from the time of the completion of thé of Land and sale be registered in the office of the Consular Representative charges of the purchaser; and all charges by way of mortgage, whether thereonof a legal or equitable character, shall also be registered in the like manner, and within one month of their execution.

All transfers of land shall be made at the Consulate where the Transfer of deeds are registered, and also be registered at that of the vendee Lots.whento or assignee. and notice of the same shall be lodged by the Consul be Registered with the Municipal Council.

It is understood and agreed that land heretofore surrendered Land surrenby the various Foreign renters to public use, such as roads and dered to the beach grounds of the rivers within the aforesaid limits, shall Publio useremain henceforth dedicated to the same uses; and as new lots are acquired, such parts thereof as are beach ground shall be held under and subject to similar uses; and due provision shall be made for the extension of the lines of roads at present laid down as means of communication in the Settlement. To this