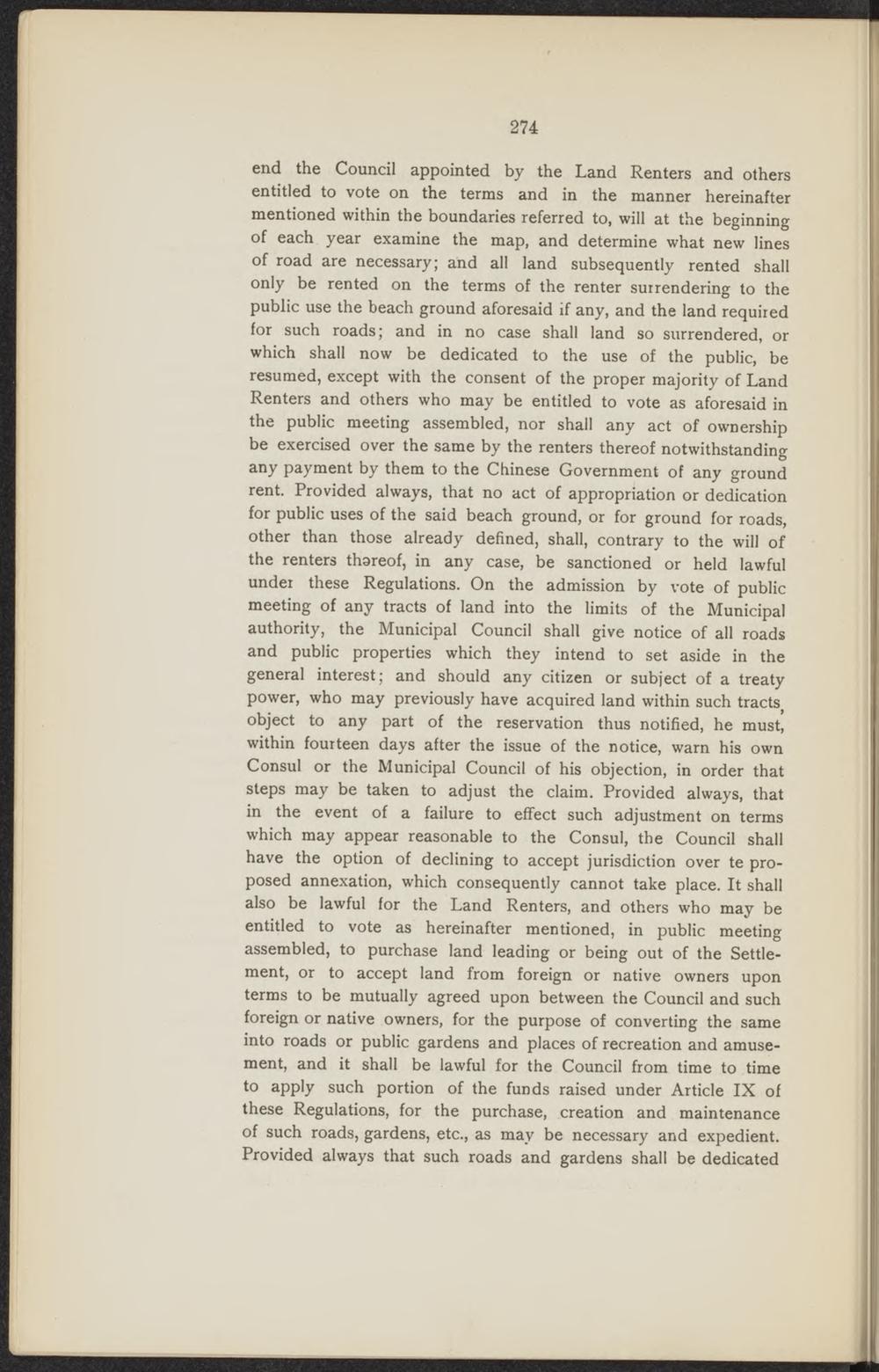 end the Council appointed by the Land Renters and others entitled to vote on the terms and in the manner hereinafter mentioned within the boundaries referred to, will at the beginning of each year examiné the map, and determine what new lines of road are necessary; and all land subsequently rented shall only be rented on the terms of the renter suirendering to the public use the beach ground aforesaid if any, and the land required for such roads; and in no case shall land so surrendered, or which shall now be dedicated to the use of the public, be resumed, except with the consent of the proper majority of Land Renters and others who may be entitled to vote as aforesaid in the public meeting assembled, nor shall any act of ownership be exercised over the same by the renters thereof notwithstanding any payment by them to the Chinese Government of any ground rent. Provided always, that no act of appropriation or dedication for public uses of the said beach ground, or for ground for roads, other than those already defïned, shall, contrary to the will of the renters thareof, in any case, be sanctioned or held lawful under these Regulations. On the admission by vote of public meeting of any tracts of land into the limits of the Municipal authority, the Municipal Council shall give notice of all roads and public properties which they intend to set aside in the general interest; and should any citizen or subject of a treaty power, who may previously have acquired land within such tracts object to any part of the reservation thus notified, he must within fourteen days after the issue of the notice, wam his own Consul or the Municipal Council of his objection, in order that steps may be taken to adjust the claim. Provided always, that in the event of a failure to effect such adjustment on terms which may appear reasonable to the Consul, the Council shall have the option of declining to accept jurisdiction over te proposed annexation, which consequently cannot take place. It shall also be lawful for the Land Renters, and others who may be entitled to vote as hereinafter mentioned, in public meeting assembled, to purchase land leading or being out of the Settlement, or to accept land from foreign or native owners upon terms to be mutualfy agreed upon between the Council and such foreign or native owners, for the purpose of converting the same into roads or public gardens and places of recreation and amusement, and it shall be lawful for the Council from time to time to apply such portion of the funds raised under Article IX of these Regulations, for the purchase, creation and maintenance of such roads, gardens, etc, as may be necessary and expediënt. Provided always that such roads and gardens shall be dedicated