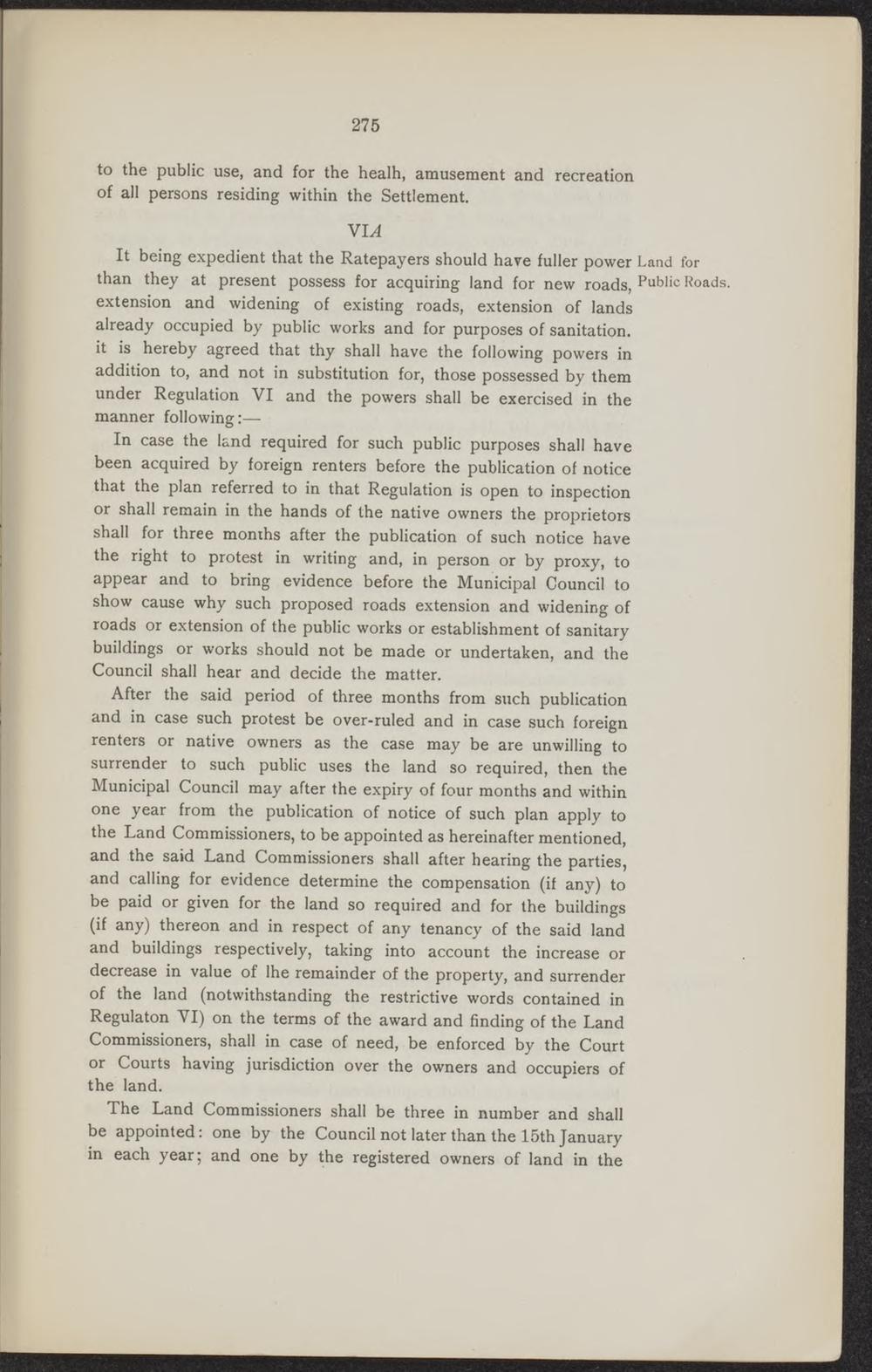 to the public use, and for the healh, amusement and recreation of all persons residing within the Settlement.

It being expediënt that the Ratepayers should have fuller power Land for than they at present possess for acquiring land for new roads, Public Roads. extension and widening of existing roads, extension of lands already occupied by public works and for purposes of sanitation. it is hereby agreed that thy shall have the following powers in addition to, and not in substitution for, those possessed by them under Regulation VI and the powers shall be exercised in the manner following:—

In case the land required for such public purposes shall have been acquired by foreign renters before the publication of notice that the plan referred to in that Regulation is open to inspection or shall remain in the hands of the native owners the proprietors shall for three months after the publication of such notice have the right to protest in writing and, in person or by proxy, to appear and to bring evidence before the Municipal Council to show cause why such proposed roads extension and widening of roads or extension of the public works or establishment of sanitary buildings or works should not be made or undertaken, and the Council shall hear and decide the matter.

After the said period of three months from such publication and in case such protest be over-ruled and in case such foreign renters or native owners as the case may be are unwilling to surrender to such public uses the land so required, then the Municipal Council may after the expiry of four months and within one year from the publication of notice of such plan apply to the Land Commissioners, to be appointed as hereinafter mentioned, and the said Land Commissioners shall after hearing the parties, and calling for evidence determine the compensation (if any) to be paid or given for the land so required and for the buildings (if any) thereon and in respect of any tenancy of the said land and buildings respectively, taking into account the increase or decrease in value of lhe remainder of the property, and surrender of the land (notwithstanding the restrictive words contained in Regulaton VI) on the terms of the award and finding of the Land Commissioners, shall in case of need, be enforced by the Court or Courts having jurisdiction over the owners and occupiers of the land.

The Land Commissioners shall be three in number and shall be appointed: one by the Council not later than the löthjanuary in each year; and one by the registered owners of land in the