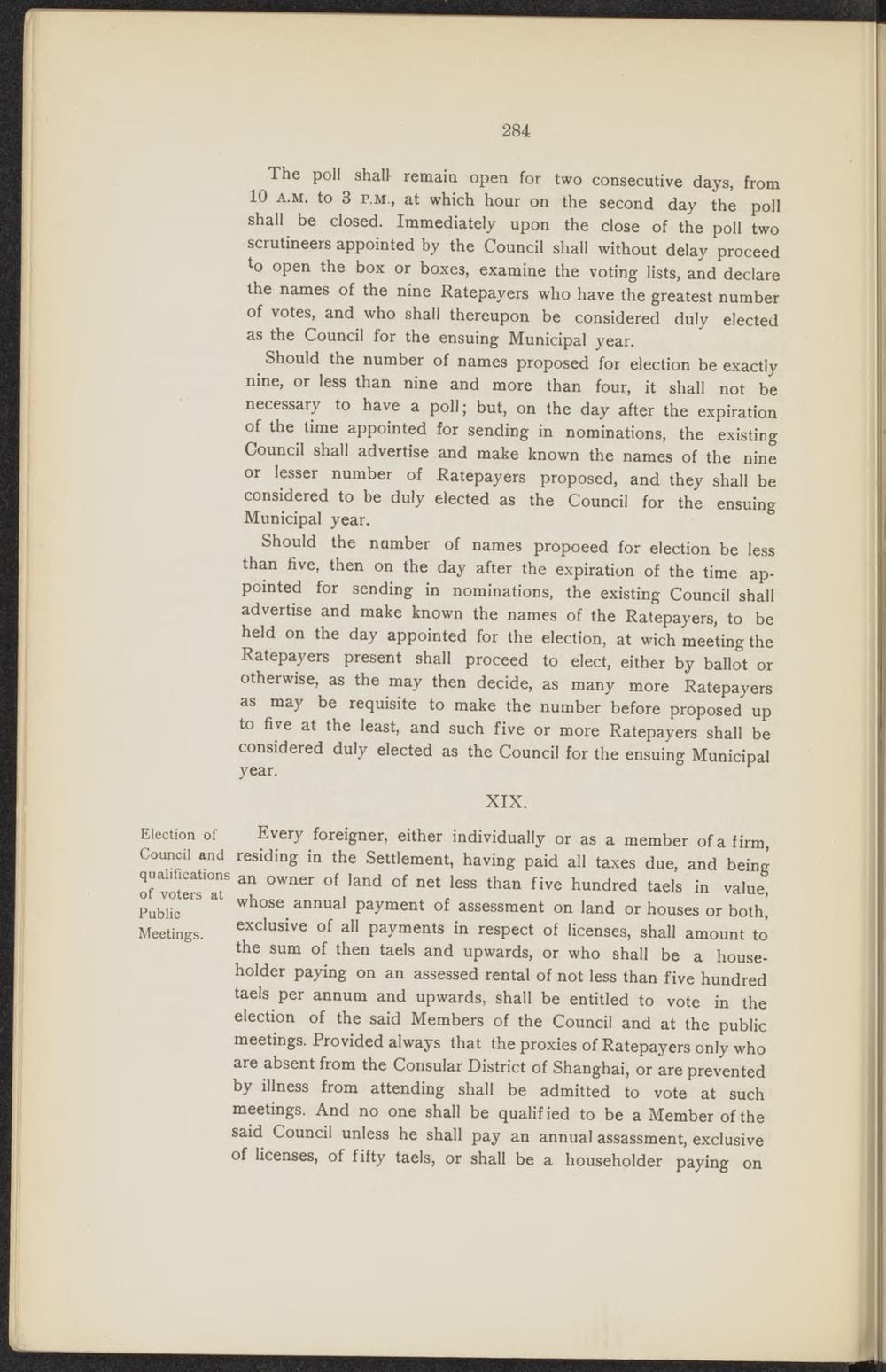 The poll shall remain open for two consecutive days, from 10 a.m. to 3 p.m., at which hour on the second day the poll shall be closed. Immediately upon the close of the poll two scrutineers appointed by the Council shall without delay proceed lo open the box or boxes, examiné the voting lists, and declare the names of the nine Ratepayers who have the greatest number of votes, and who shall thereupon be considered duly elected as the Council for the ensuing Municipal year.

Should the number of names proposed for election be exactly nine, or less than nine and more than four, it shall not be necessary to have a poll; but, on the day after the expiration of the time appointed for sending in nominations, the existing Council shall advertise and make known the names of the nine or lesser number of Ratepayers proposed, and they shall be considered to be duly elected as the Council for the ensuing Municipal year.

Should the number of names propoeed for election be less than five, then on the day after the expiration of the time appointed for sending in nominations, the existing Council shall advertise and make known the names of the Ratepayers, to be held on the day appointed for the election, at wich meeting the Ratepayers present shall proceed to elect, either by ballot or otherwise, as the may then decide, as many more Ratepayers as may be requisite to make the number before proposed up to five at the least, and such five or more Ratepayers shall be considered duly elected as the Council for the ensuing Municipal year.

Election of Every foreigner, either individually or as a member of a finn Council and residing in the Settlement, having paid all taxes due, and beiné qualtfications an owner of Jand of ^ lesg thaQ f. *

Public M payment of assessment on land or houses or both,

Meetings. exdusive of all payments in respect of licenses, shall amount to the sum of then taels and upwards, or who shall be a householder paying on an assessed rental of not less than five hundred taels per annum and upwards, shall be entitled to vote in the election of the said Members of the Council and at the public meetings. Provided always that the proxies of Ratepayers only who are absent from the Consular District of Shanghai, or are prevented by illness from attending shall be admitted to vote at such meetings. And no one shall be qualified to be a Member of the said Council unless he shall pay an annual assassment, exclusive of licenses, of fifty taels, or shall be a househplder paying on