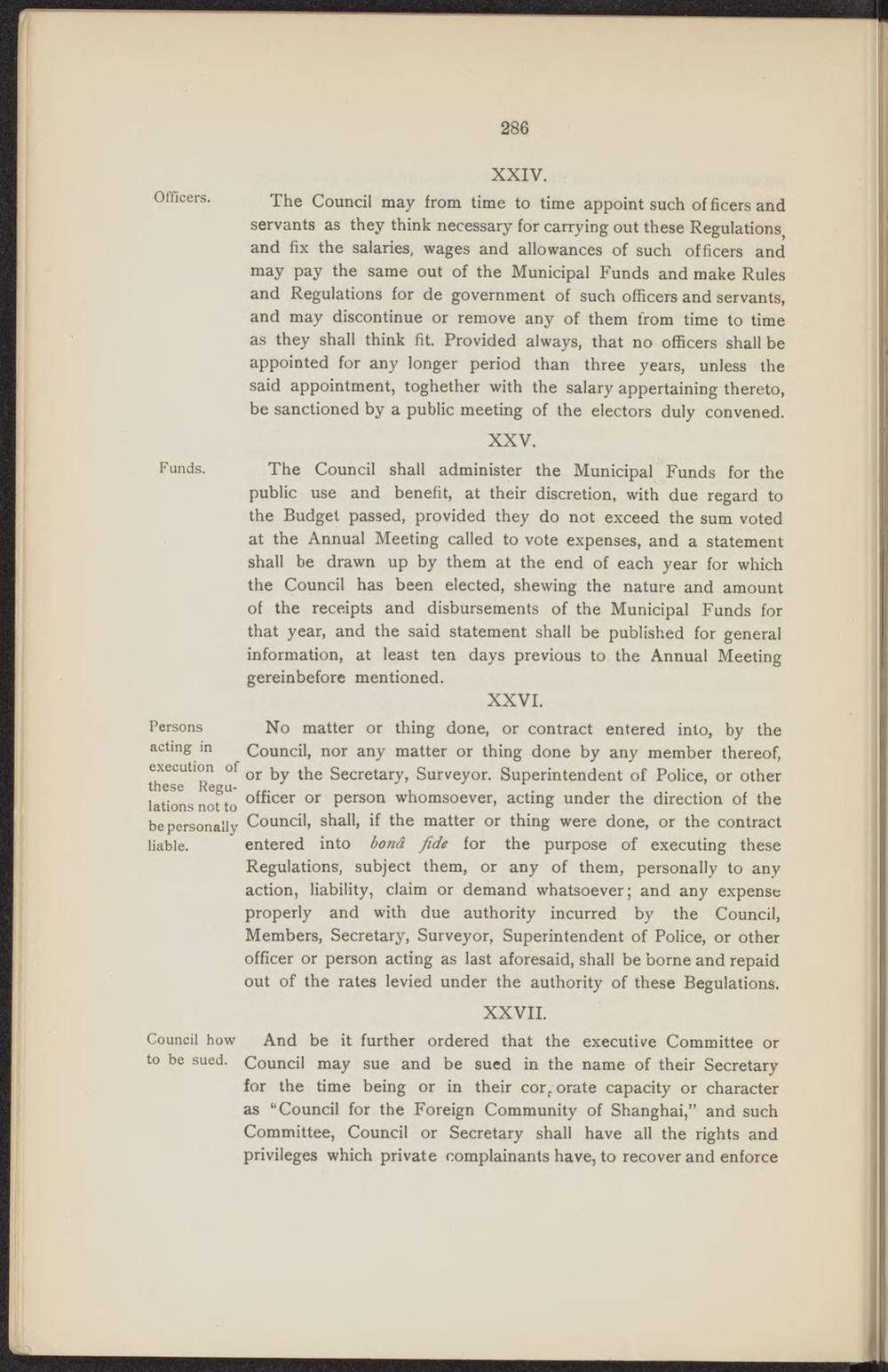 Officers. The Council may from time to time appoint such of ficers and

servants as they think necessary for carrying out these Regulations and fix the salades, wages and allowances of such officers and may pay the same out of the Municipal Funds and make Rules and Regulations for de government of such officers and servants, and may discontinue or remove any of them from time to time as they shall think fit. Provided always, that no officers shall be appointed for any longer period than three years, unless the said appointment, toghether with the salary appertaining thereto, be sanctioned by a public meeting of the electors duly convened. XXV.

Funds. The Council shall administer the Municipal Funds for the

public use and benefit, at their discretion, with due regard to the Budget passed, provided they do not exceed the sum voted at the Annual Meeting called to vote expenses, and a statement shall be drawn up by them at the end of each year for which the Council has been elected, shewing the nature and amount of the receipts and disbursements of the Municipal Funds for that year, and the said statement shall be published for general information, at least ten days previous to the Annual Meeting gereinbefore mentioned.

Persons No matter or thing done, or contract entered into, by the

acting in Council, nor any matter or thing done by any member thereof, execution of Qr D ^ Secretary, Surveyor. Superintendent of Police, or other these Regu- ... , . , ,

lationsnott °"K-er or Person whomsoever, acting under the direction of the bepersonally Council, shall, if the matter or thing were done, or the contract liable. entered into bond fide for the purpose of executing these

Regulations, subject them, or any of them, personally to any action, liability, claim or demand whatsoever; and any expense properly and with due authority incurred by the Council, Members, Secretary, Surveyor, Superintendent of Police, or other officer or person acting as last aforesaid, shall be borne and repaid out of the rates levied under the authority of these Begulations.

Council how And be it further ordered that the executive Committee or to be sued. Council may sue and be sued in the name of their Secretary for the time being or in their corr orate capacity or character as "Council for the Foreign Community of Shanghai," and such Committee, Council or Secretary shall have all the rights and privileges which private complainants have, to recover and enforce