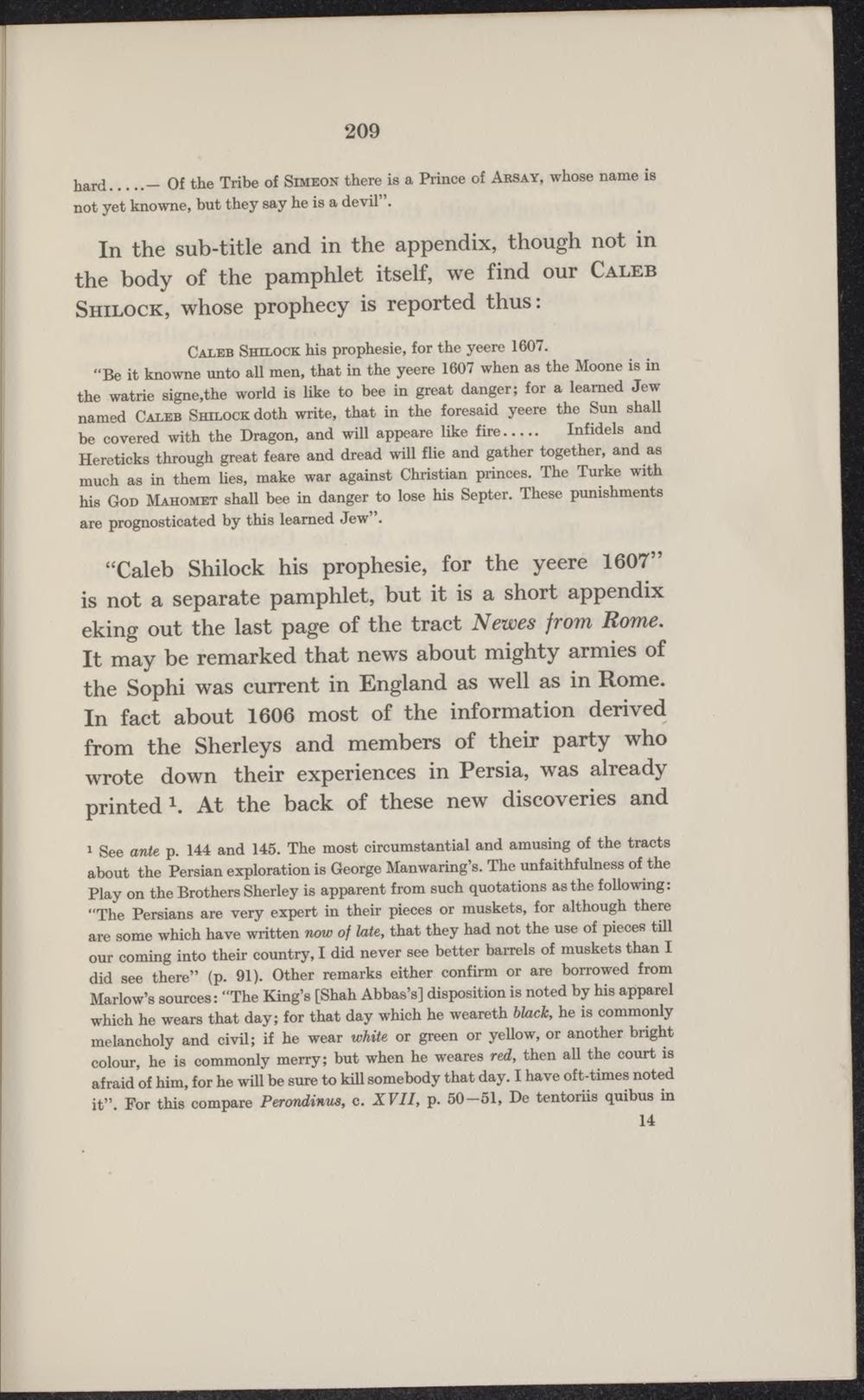 hard _ Of the Tribe of Simeon there is a Prince of Arsay, whose name is

not yet knowne, but they say he is a devil".

In the sub-title and in the appendix, though not in the body of the pamphlet itself, we find our Caleb Shilock, whose prophecy is reported thus:

Caleb Shilock his prophesie, for the yeere 1607. "Be it knowne unto all men, that in the yeere 1607 when as the Moone is in the watrie signe.the world is like to bee in great danger; for a learned Jew named Caleb Shtlock doth write, that in the foresaid yeere the Sun shall

be covered with the Dragon, and will appeare like fire Infidels and

Hereticks through great feare and dread will flie and gather together, and as much as in them hes, make war against Christian prinoes. The Turke with his God Mahomet shall bee in danger to lose his Septer. These punishments are prognosticated by this learned Jew".

"Caleb Shilock his prophesie, for the yeere 1607" is not a separate pamphlet, but it is a short appendix eking out the last page of the tract Newes from Rome. It may be remarked that news about mighty armies of the Sophi was current in England as well as in Rome. In fact about 1606 most of the information derived from the Sherleys and members of their party who wrote down their experiences in Persia, was already printed1. At the back of these new discoveries and

i See ante p. 144 and 145. The most circumstantial and amusing of the tracts about the Persian exploration is George Manwaring's. The unfaithfulness of the Play on the Brothers Sherley is apparent from such quotations as the following: "The Persians are very expert in their pieces or muskets, for although there are some which have written now of late, that they had not the use of pieces till our coming into their country, I did never see better barrels of muskets than I did see there" (p. 91). Other remarks either confirm or are borrowed from Marlow's sources: "The King's [Shah Abbas's] disposition is noted by his apparel which he wears that day; for that day which he weareth black, he is oommonly melancholy and oivil; if he wear white or green or yellow, or another bright colour, he is commonly merry; but when he weares red, then all the court is afraid of him, for he will be sure to kill somebody that day. I have oft-times noted it". Por this compare Perondinus, c. XVII, p. 50-51, De tentoriis quibus in