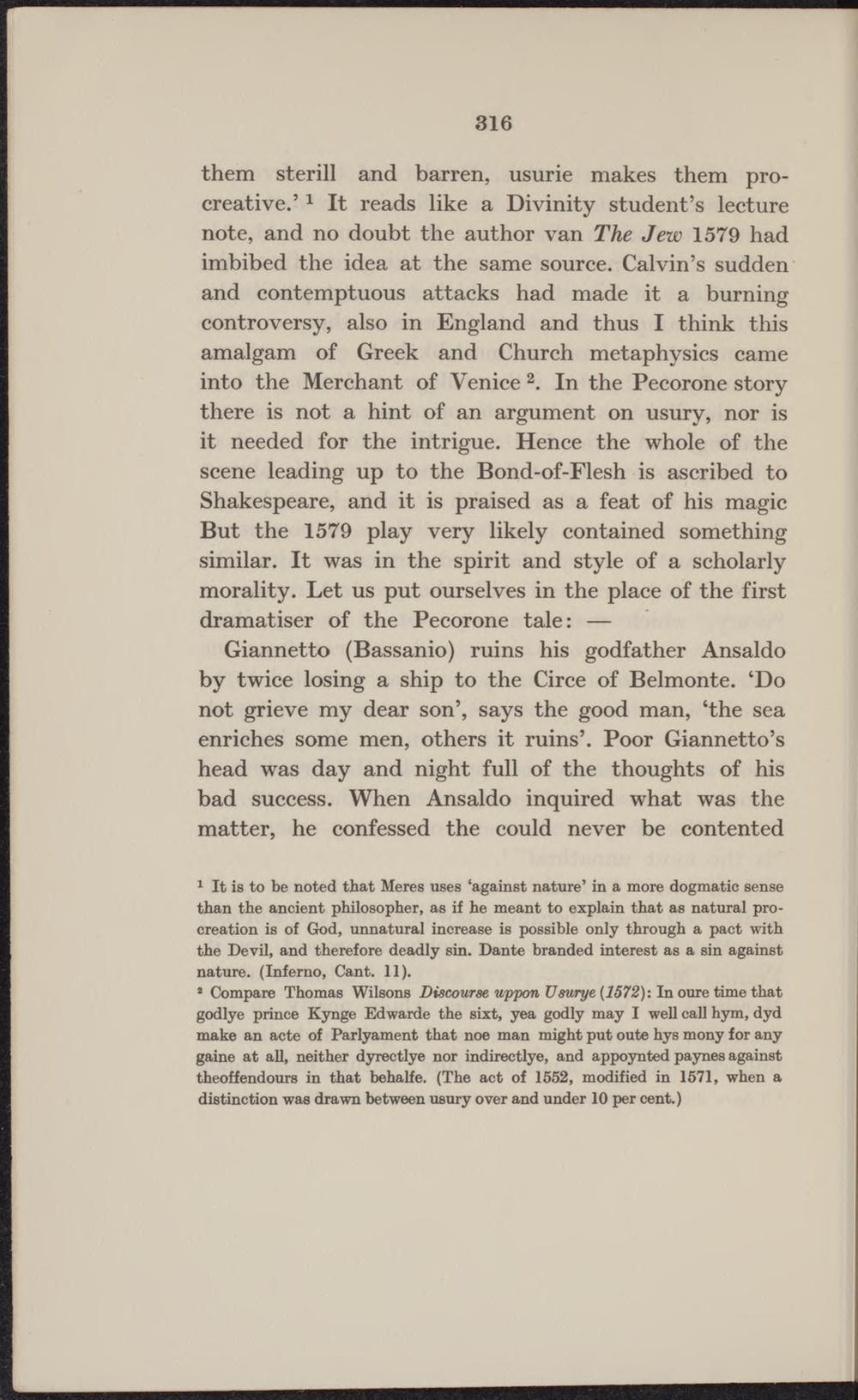 them stenll and barren, usurie makes them procreative.'1 It reads like a Divinity student's lecture note, and no doubt the author van The Jew 1579 had imbibed the idea at the same source. Calvin's sudden and contemptuous attacks had made it a burning controversy, also in England and thus I think this amalgam of Greek and Church metaphysics came into the Merchant of Venice 2. In the Pecorone story there is not a hint of an argument on usury, nor is it needed for the intrigue. Hence the whole of the scène leading up to the Bond-of-Flesh is ascribed to Shakespeare, and it is praised as a feat of his magie But the 1579 play very likely contained something similar. It was in the spirit and style of a scholarly morality. Let us put ourselves in the place of the first dramatiser of the Pecorone tale: —

Giannetto (Bassanio) ruins his godfather Ansaldo by twice losing a ship to the Circe of Belmonte. 'Do not grieve my dear son', says the good man, 'the sea enriches some men, others it ruins'. Poor Giannetto's head was day and night full of the thoughts of his bad success. When Ansaldo inquired what was the matter, he confessed the could never be contented

1 It is to be noted that Meres uses 'against nature' in a more dogmatic sense than the ancient philosopher, as if he meant to explain that as natural procreation is of God, unnatural increase is possible only through a pact with the Devil, and therefore deadly sin. Dante branded interest as a sin against nature. (Inferno, Cant. 11).

* Compare Thomas Wilsons Discourse uppon Usurye(1572): In oure time that godlye prince Kynge Edwarde the sixt, yea godly may I well call hym, dyd make an acte of Parlyament that noe man might put oute hys mony for any gaine at all, neither dyrectlye nor indirectlye, and appoynted paynes against theoffendours in that behalfe. (The act of 1552, modified in 1571, when a distinction was drawn between usury over and under 10 per cent.)