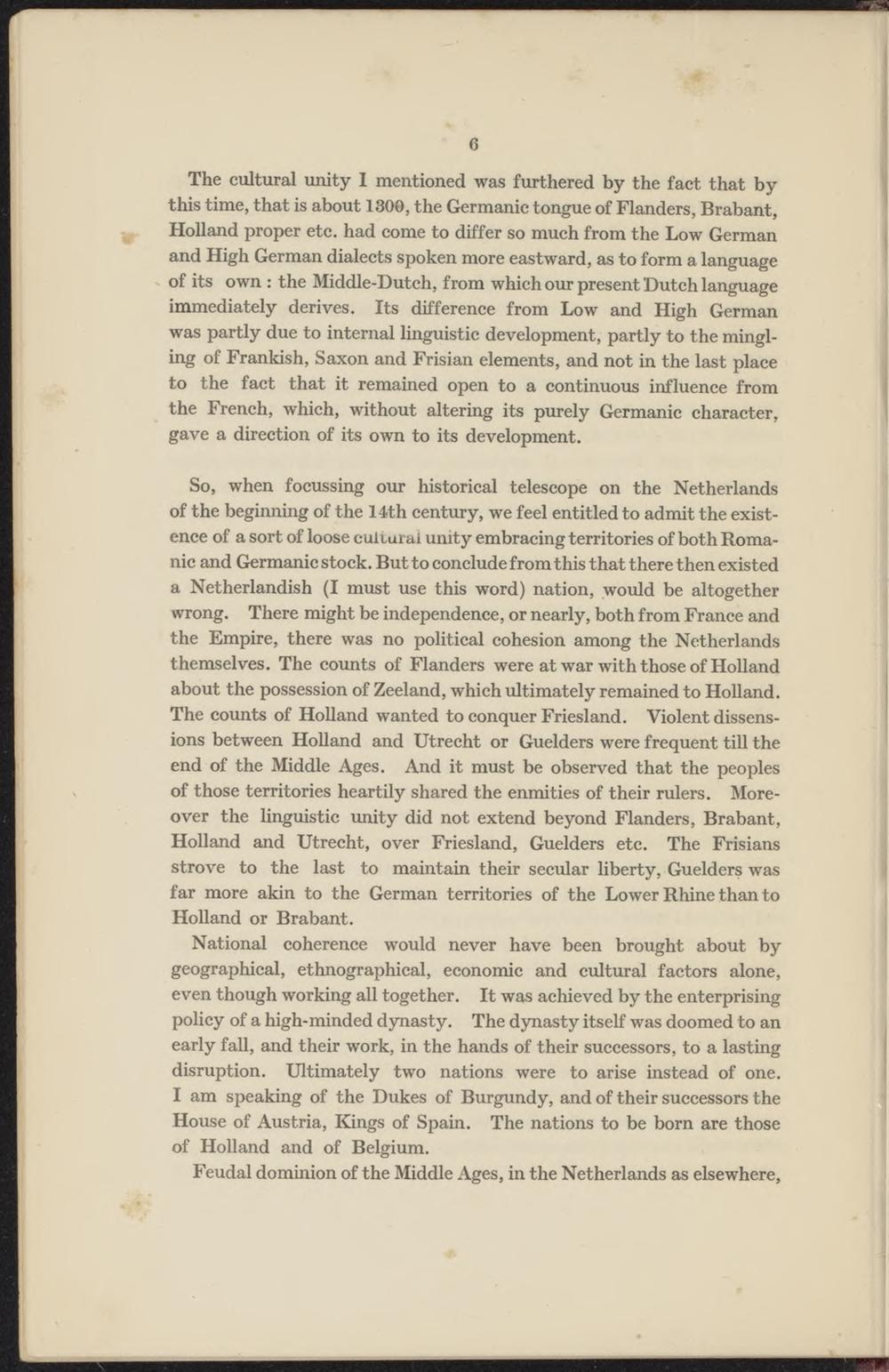 The cultural unity I mentioned was furthered by the fact that by this time, that is about 180», the Germanic tongue of Flanders, Brabant, Holland proper etc. had come to differ so much from the Low German and High German dialects spoken more eastward, as to form a language of its own: the Middle-Dutch, from which our present Dutch language immediately derives. Its difference from Low and High German was parüy due to internal linguistic development, partly to the mingling of Frankish, Saxon and Frisian dements, and not in the last place to the fact that it remained open to a continuous influence from the French, which, without altering its purely Germanic character, gave a direction of its own to its development.

So, when focussing our historical telescope on the Netherlands of the beginning of the 14th century, we feel entitled to admit the existence of a sort of loose cultural unity embracing territories of both Romanic and Germanic stock. But to conclude from this that there thenexisted a Netherlandish (I must use this word) nation, .would be altogether wrong. There might be independence, or nearly, both from France and the Empire, there was no political cohesion among the Netherlands themselves. The counts of Flanders were at war with those of Holland about the possession of Zeeland, which ultimately remained to Holland. The counts of Holland wanted toconquer Friesland. Violent dissensions between Holland and Utrecht or Guelders were frequent till the end of the Middle Ages. And it must be observed that the peoples of those territories heartily shared the enmities of their rulers. Moreover the linguistic unity did not extend beyond Flanders, Brabant, Holland and Utrecht, over Friesland, Guelders etc. The Frisians strove to the last to maintain their secular liberty, Guelders was far more akin to the German territories of the Lower Rhine than to Holland or Brabant.

National coherence would never have been brought about by geographical, ethnographical, economie and cultural factors alone, even though working all together. It was achieved by the enterprising policy of a high-minded dynasty. The dynasty itself was doomed to an early fall, and their work, in the hands of their suceessors, to a lasting disruption. Ultimately two nations were to arise instead of one. I am speaking of the Dukes of Burgundy, and of their suceessors the House of Austria, Kings of Spain. The nations to be bom are those of Holland and of Belgium.

Feudal dominion of the Middle Ages, in the Netherlands as elsewhere,