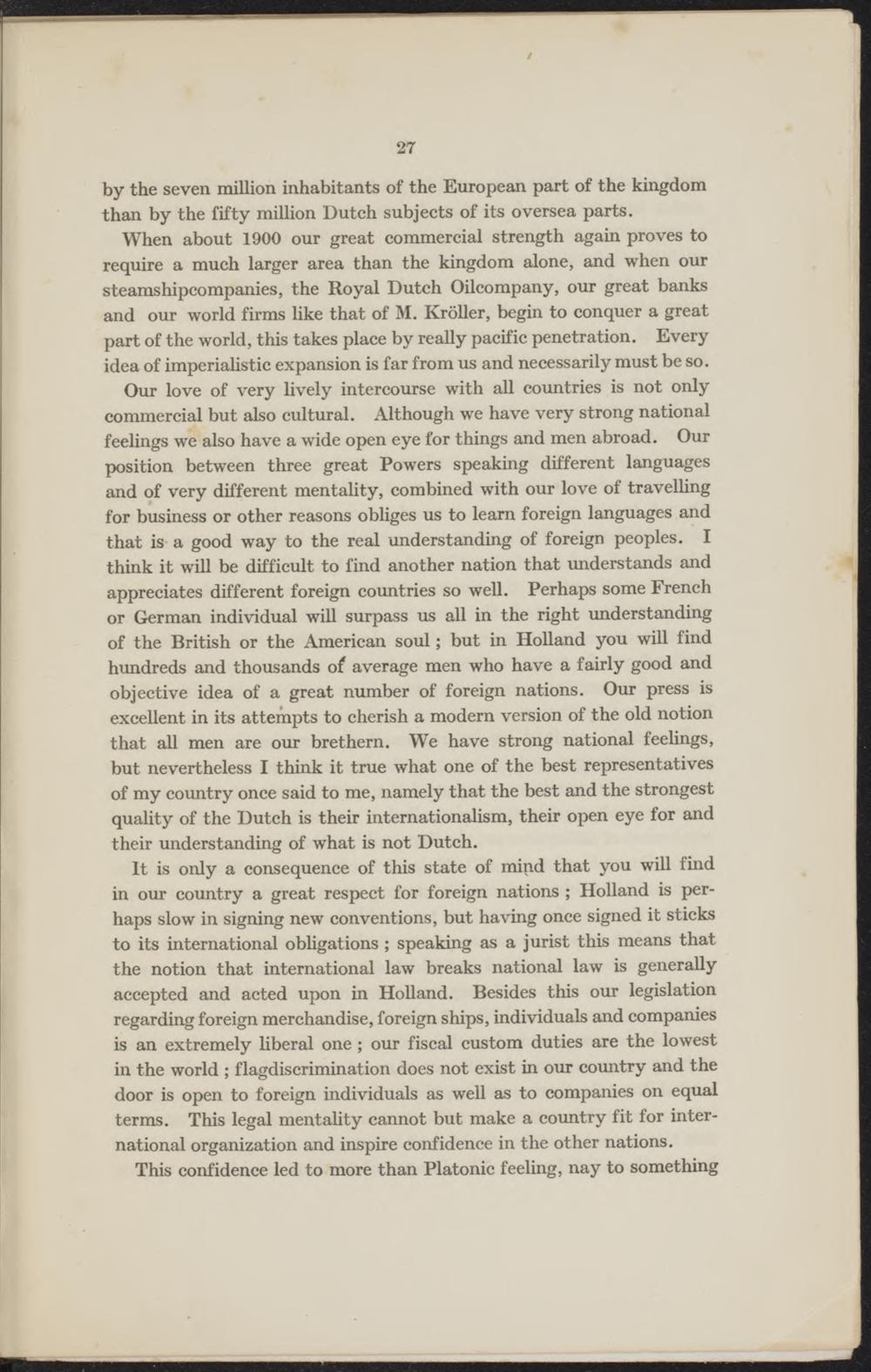 by the seven million inhabitants of the European part of the kingdom than by the fifty million Dutch subjects of its oversea parts.

When about 1900 our great commercial strength again proves to require a much larger area than the kingdom alone, and when our steamshipcompanies, the Royal Dutch Oilcompany, our great banks and our world firms like that of M. Kröller, begin to conquer a great part of the world, this takes place by really pacific penetration. Every idea of imperialistic expansion is far from us and necessarily must be so.

Our love of very lively intercourse with all countries is not only commercial but also cultural. Although we have very strong national feelings we also have a wide open eye for things and men abroad. Our position between three great Powers speaking different languages and of very different mentality, combined with our love of travelling for business or other reasons obliges us to learn foreign languages and that is a good way to the real understanding of foreign peoples. I think it will be difficult to find another nation that understands and appreciates different foreign countries so well. Perhaps some French or German individual will surpass us all in the right understanding of the British or the American soul; but in Holland you will find hundreds and thousands of average men who have a fairly good and objective idea of a great number of foreign nations. Our press is excellent in its attempts to cherish a modern version of the old notion that all men are our brethern. We have strong national feelings, but nevertheless I think it true what one of the best representatives of my country once said to me, namely that the best and the strongest quality of the Dutch is their internationalism, their open eye for and their understanding of what is not Dutch.

It is only a consequence of this state of mind that you will find in our country a great respect for foreign nations; Holland is perhaps slow in signing new conventions, but having once signed it sticks to its international obligations; speaking as a jurist this means that the notion that international law breaks national law is generally accepted and acted upon in Holland. Besides this our legislation regarding foreign merchandise, foreign ships, individuals and companies is an extremely liberal one; our fiscal custom duties are the lowest in the world ; flagdiscaimination does not exist in our country and the door is open to foreign individuals as well as to companies on equal terms. This legal mentality cannot but make a country fit for international organization and inspire confidence in the other nations. This confidence led to more than Platonic feeling, nay to something