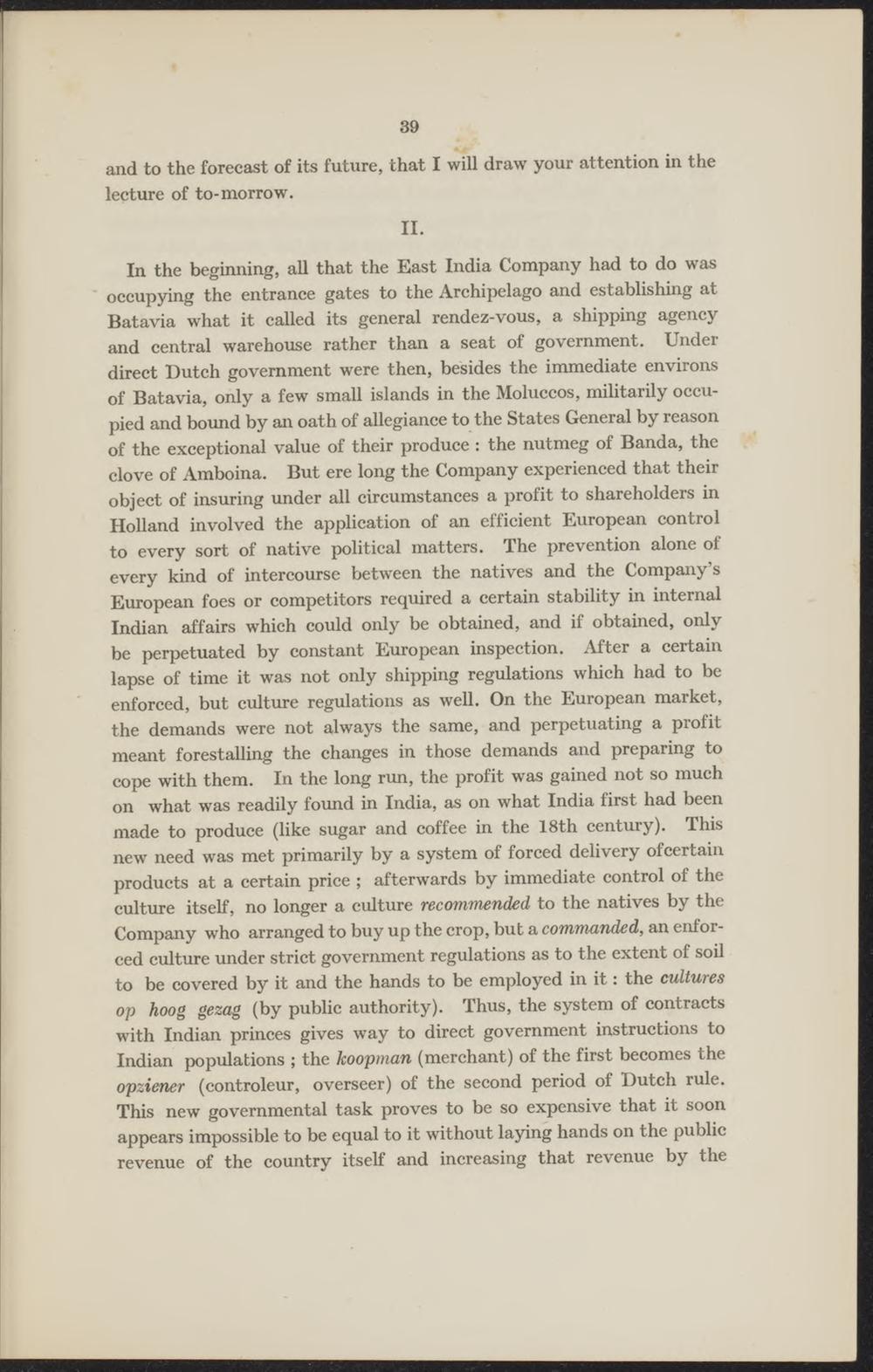 and to the forecast of its future, that I will draw your attention in the lecture of to-morrow.

In the beginning, all that the East India Company had to do was occupying the entrance gates to the Archipelago and establishing at Batavia what it called its general rendez-vous, a shipping agency and central warehouse rather than a seat of government. Under direct Dutch government were then, bésides the immediate environs of Batavia, only a few small islands in the Moluccos, müitarily occupied and bound by an oath of allegiance to the States General by reason of the exceptional value of their produce: the nutmeg of Banda, the clove of Amboina. But ere long the Company experienced that their object of insuring under all circumstances a profit to shareholders in Holland involved the application of an efficiënt European control to every sort of native political matters. The prevention alone of every kind of intercourse between the natives and the Company's European foes or competitors required a certain stability in internal Indian affairs which could only be obtained, and if obtained, only be perpetuated by constant European inspection. After a certain lapse of time it was not only shipping regulations which had to be enforced, but culture regulations as well. On the European market, the demands were not always the same, and perpetuating a profit meant forestalling the changes in those demands and preparing to cope with them. In the long run, the profit was gained not so much on what was readily found in India, as on what India first had been made to produce (like sugar and coffee in the 18th century). This new need was met primarily by a system of forced delivery of certain products at a certain price ; afterwards by immediate control of the culture itself, no longer a culture recommended to the natives by the Company who arranged to buy up the erop, but a commanded, an enforced culture under strict government regulations as to the extent of soil to be covered by it and the hands to be employed in it: the cultures op hoog gezag (by public authority). Thus, the system of contracts with Indian princes gives way to direct government instructions to Indian populations ; the koopman (merchant) of the first becomes the opziener (controleur, overseer) of the second period of Dutch rule. This new governmental task proves to be so expensive that it soon appears impossible to be equal to it without laying hands on the public revenue of the country itself and increasing that revenue by the