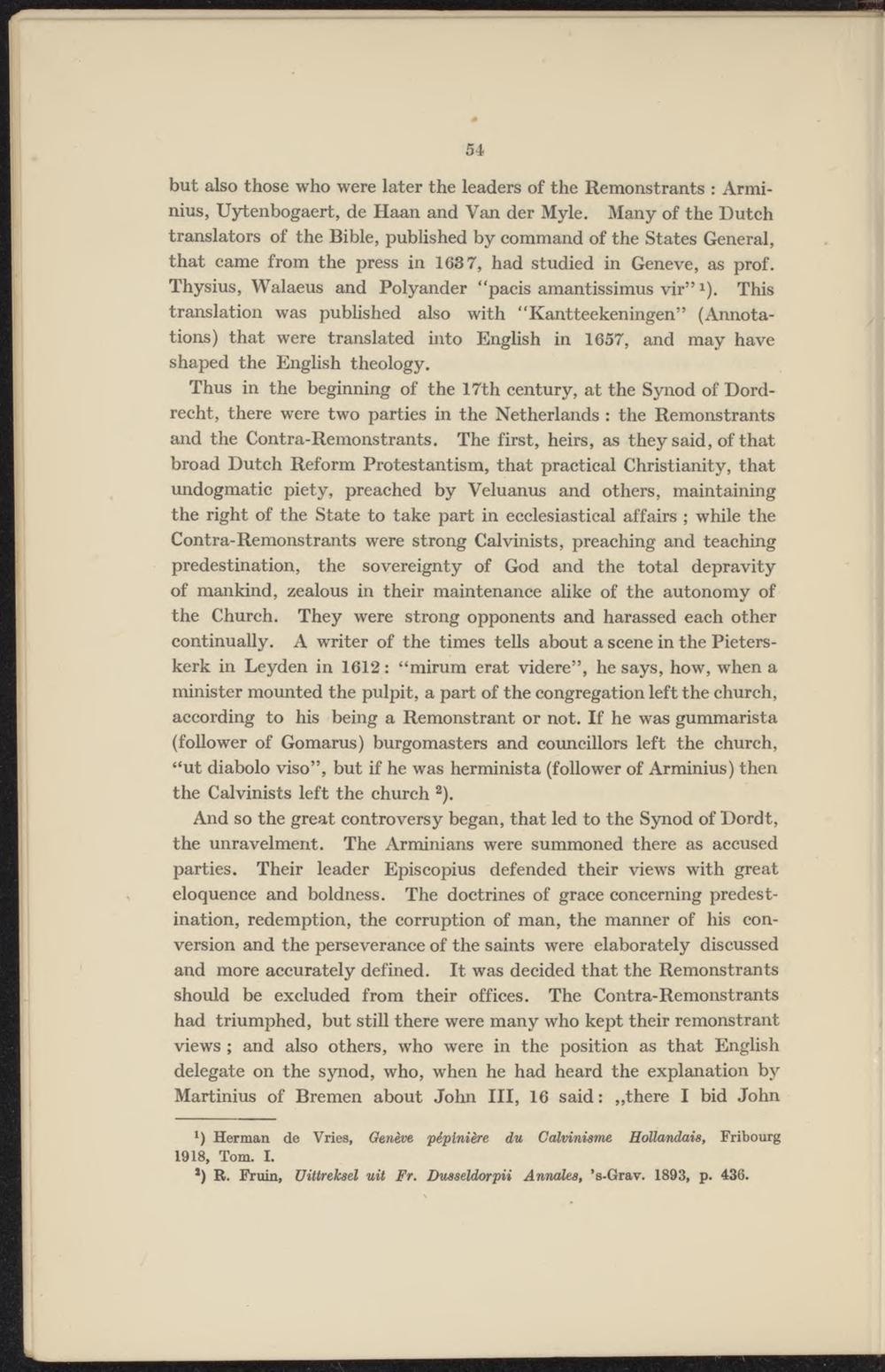 but also those who were later the leaders of the Remonstrants : Arminius, Uytenbogaert, de Haan and Van der Myle. Many of the Dutch translators of the Bible, published by command of the States General, that came from the press in 1687, had studied in Geneve, as prof. Thysius, Walaeus and Polyander "pacis amantissimus vir"This translation was published also with "Kantteekeningen" (Annotations) that were translated into English in 1657, and may have shaped the English theology.

Thus in the beginning of the 17th century, at the Synod of Dordrecht, there were two parties in the Netherlands: the Remonstrants and the Contra-Remonstrants. The first, heirs, as they said, of that broad Dutch Reform Protestantism, that practical Christianity, that undogmatic piety, preached by Veluanus and others, maintaining the right of the State to take part in ecclesiastical affairs ; while the Contra-Remonstrants were strong Calvinists, preaching and teaching predestination, the sovereignty of God and the total depravity of mankind, zealous in their maintenance alike of the autonomy of the Church. They were strong opponents and harassed each other continually. A writer of the times tells about a scène in the Pieterskerk in Leyden in 1612: "mirum erat videre", he says, how, when a minister mounted the pulpit, a part of the congregation left the church; according to his being a Remonstrant or not. If he was gummarista (follower of Gomarus) burgomasters and councillors left the church, "ut diabolo viso", but if he was herminista (follower of Arminius) then the Calvinists left the church *).

And so the great controversy began, that led to the Synod of Dordt, the unravelment. The Arminians were summoned there as accused parties. Their leader Episcopius defended their views with great eloquence and boldness. The doctrines of grace concerning predestination, redemption, the corruption of man, the manner of his conversion and the perseverance of the saints were elaborately discussed and more accurately defined. It was decided that the Remonstrants should be excluded from their offices. The Contra-Remonstrants had triumphed, but still there were many who kept their remonstrant views; and also others, who were in the position as that English delegate on the synod, who, when he had heard the explanation by Martinius of Bremen about John III, 16 said: „there I bid John