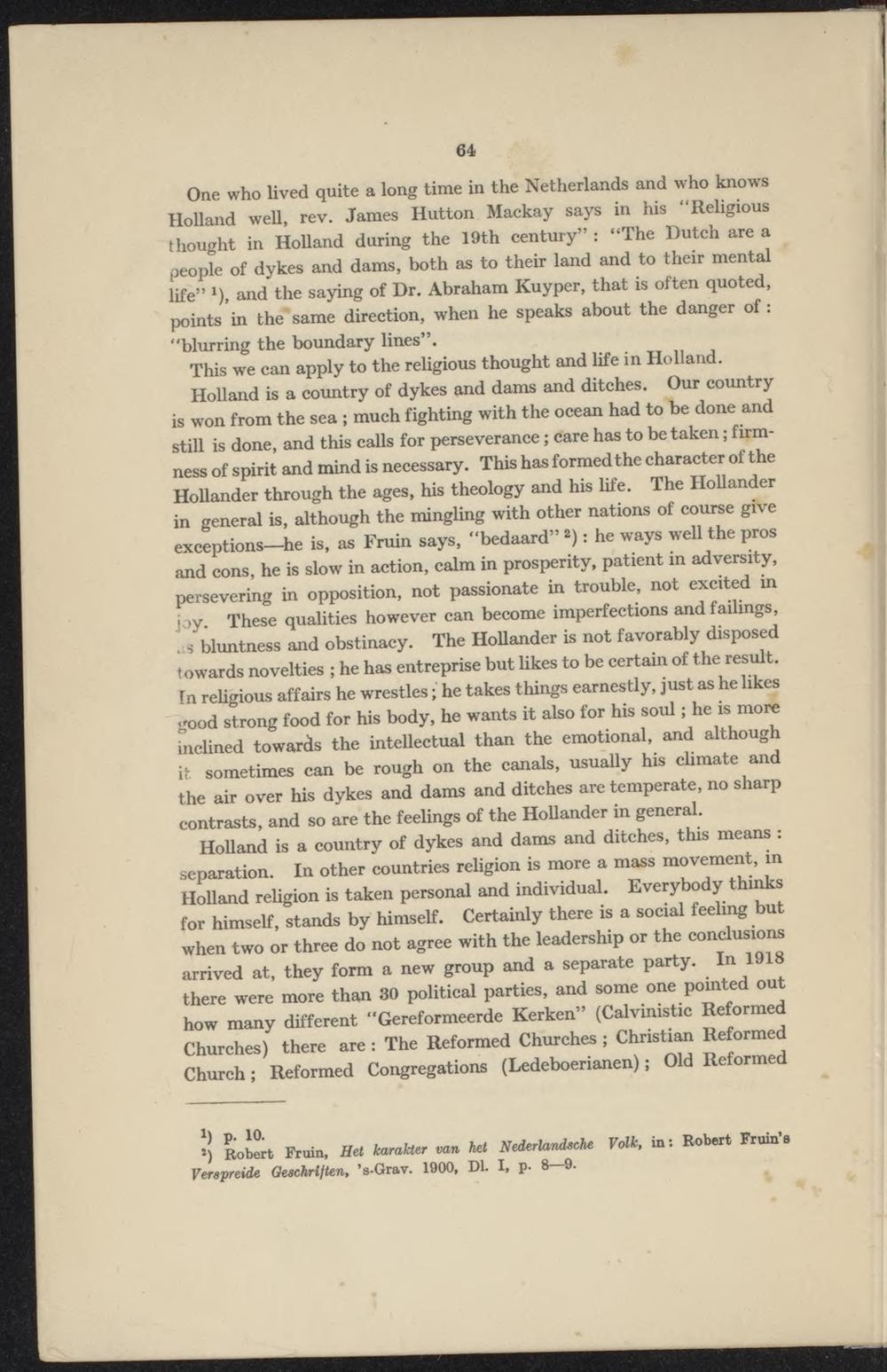 One who lived quite a long time in the Netherlands and who knows Holland well, rev. James Hutton Mackay says in his "Religious thought in Holland during the 19th century" : "The Dutch are a people of dykes and dams, both as to theii land and to their mental life" *) and the saying of Dr. Abraham Kuyper, that is often quoted, points'in thé*same direction, when he speaks about the danger of: "blurring the boundary lines". This we can apply to the religious thought and life in Holland. Holland is a country of dykes and dams and ditches. Our country is won from the sea; much fighting with the ocean had tol* done and still is done, and this calls for perseverance; dare has to be taken; fitness of sr^t and mind is necessary. This has formedthe character of the Hollander through the ages, his theology and his life. The Hollander in general is, although the mingling with other nations of course grve excePtions-he is, as Fruin says, "bedaard» »): he ways well the pros and cons, he is slow in action, calm in rjrosperity, patiënt m adversity, persevering in opposition, not passionate in trouble, not excrted m by These quahties however can become imperfections and f aihngs a> htantness and obstinacy. The Hollander is not favorably disposed towards novelties ; he has entreprise but likes to be certain of the result. In religious aff airs he wrestles; he takes things earnestiy, just as he likes good strong food for his body, he wants it also for his soul;, he isi mo* mclined towards the inteUectual than the emotional, and although it sometimes can be rough on the canals, usually his chmate and the air over his dykes and dams and ditches are temperate, no sharp contrasts, and so are the feelings of the Hollander in general.

Holland is a country of dykes and dams and ditches, this means : separation. In other countries religion is more a mass movement, in Holland religion is taken personal and individual. Everybody thinks for himself, stands by himself. Certainly there is a social feehng but when two or three do not agree with the leadership or the conclusions arrived at, they form a new group and a separate party. In 1918 there were more than 30 political parties, and some one pointed out how many different "Gereformeerde Kerken" (Calvinistic Reformed Churches) there are : The Reformed Churches ; Chmtian Reformed Church; Reformed Congregations (Ledeboerianen); Old Reformed