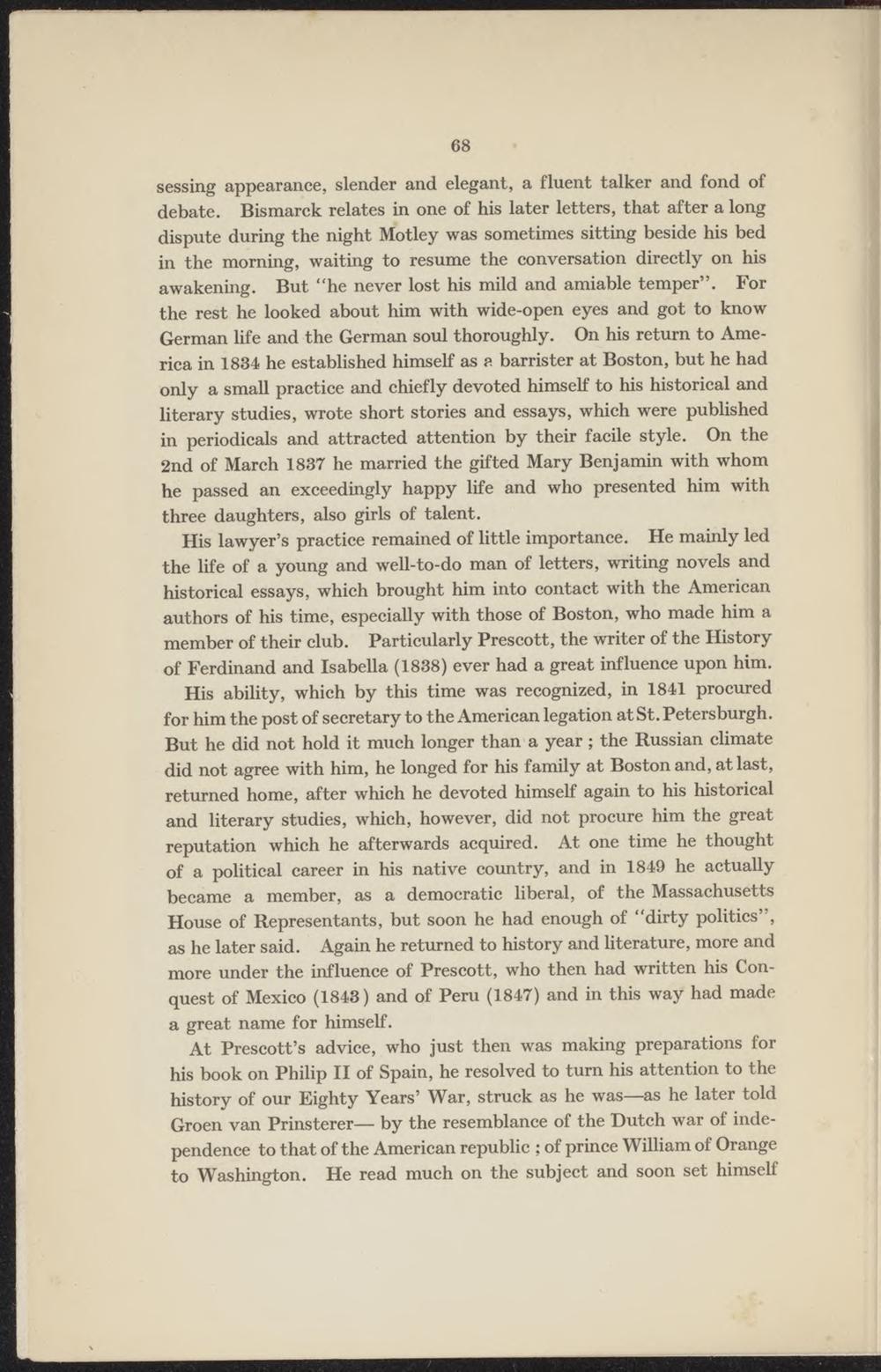 sessing appearance, slender and elegant, a fluent talker and fond of debate. Bismarck relates in one of his later letters, that after a long dispute during the night Motley was sometimes sitting beside his bed in the moming, waiting to resumé the conversation directly on his awakening. But "he never lost his mild and amiable temper". For the rest he looked about him with wide-open eyes and got to know German life and the German soul thoroughly. On his return to America in 1884 he established himself as r barrister at Boston, but he had only a small practice and chiefly devoted himself to his historical and Uterary studies, wrote short stories and essays, which were published in periodicals and attracted attention by their facile style. On the 2nd of March 1837 he married the gifted Mary Benjamin with whom he passed an exceedingly happy life and who presented him with three daughters, also girls of talent.

His lawyer's practice remained of httle importance. He mainly led the life of a young and well-to-do man of letters, writing novels and historical essays, which brought him into contact with the American authors of his time, especially with those of Boston, who made him a member of their club. Particularly Prescott, the writer of the History of Fenlinand and Isabella (1888) ever had a great influence upon him.

His ability, which by this time was recognized, in 1841 procured for him the post of secretary to the American legation at St. Petersburgh. But he did not hold it much longer than a year; the Russian climate did not agree with him, he longed for his family at Boston and, at last, returned home, after which he devoted himself again to his historical and Uterary studies, which, however, did not procure him the great reputation which he afterwards acquired. At one time he thought of a political career in his native country, and in 1849 he actuaUy became a member, as a democratie liberal, of the Massachusétts House of Representants, but soon he had enough of "dirty politics", as he later said. Again he returned to history and Uterature, more and more under the influence of Prescott, who then had written his Conquest of Mexico (1848) and of Peru (1847) and in this way had made a great name for himself.

At Prescott's advice, who just then was making preparations for his book on Phflip II of Spain, he resolved to turn his attention to the history of our Eighty Years' War, struck as he was—as he later told Groen van Prinsterer— by the resemblance of the Dutch war of independence to that of the American repubhc ; of prince WilUam of Orange to Washington. He read much on the subject and soon set himself