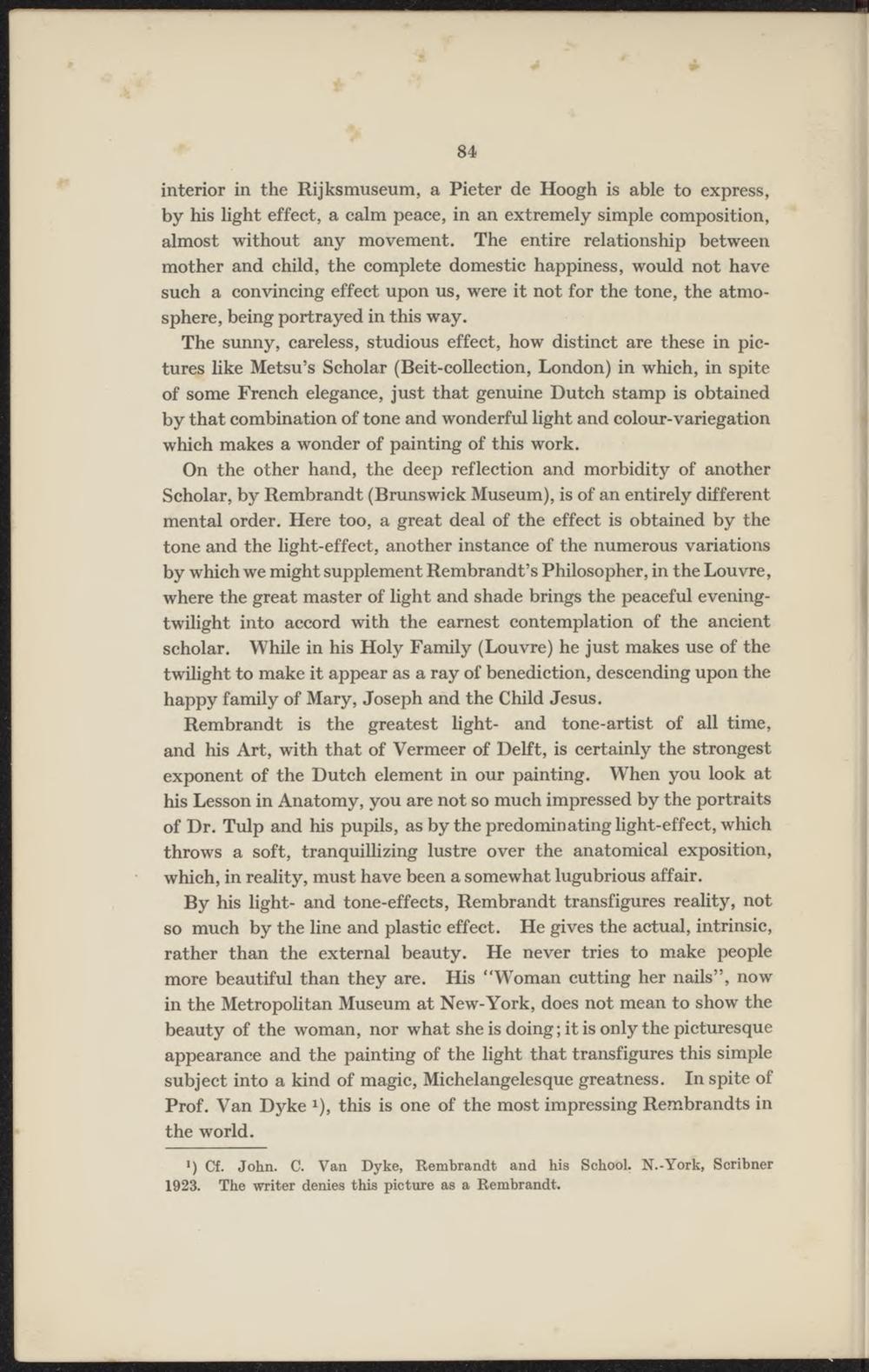 interior in the Rijksmuseum, a Pieter de Hoogh is able to express, by bis light effect, a calm peace, in an extremely simple composition, almost without any movement. The entire relationship between mother and child, the complete domestic happiness, would not have such a convincing effect upon us, were it not for the tone, the atmosphere, being portrayed in this way.

The sunny, careless, studious effect, how distinct are these in pictures like Metsu's Scholar (Beit-collection, London) in which, in spite of some French elegance, just that genuine Dutch stamp is obtained by that combination of tone and wonderful light and colour-variegation which makes a wonder of painting of this work.

On the other hand, the deep reflection and morbidity of another Scholar, by Rembrandt (Brunswick Museum), is of an entirely different mental order. Here too, a great deal of the effect is obtained by the tone and the light-effect, another instance of the numerous variations by which we might supplement Rembrandt's Philosopher, in the Louvre, where the great master of light and shade brings the peaceful eveningtwilight into accord with the earnest contemplation of the ancient scholar. While in his Holy Family (Louvre) he just makes use of the twilight to make it appear as a ray of benediction, descending upon the happy family of Mary, Joseph and the Child Jesus.

Rembrandt is the greatest light- and tone-artist of all time, and his Art, with that of Vermeer of Delft, is certainly the strongest exponent of the Dutch element in our painting. When yoU look at his Lesson in Anatomy, you are not so much impressed by the portraits of Dr. Tulp and his pupils, asby the predominating light-effect, which throws a soft, tranquillizing lustre over the anatomical exposition, which, in reality, must have been a somewhat lugubrious affair.

By his light- and tone-effects, Rembrandt transfigures reality, not so much by the line and plastic effect. He gives the actual, intrinsic, rather than the external beauty. He never tries to make people more beautiful than they are. His "Woman cutting her nails", now in the Metropolitan Museum at New-York, does not mean to show the beauty of the woman, nor what she is doing;it is only the picturesque appearance and the painting of the light that transfigures this simple subject into a kind of magie, Michelangelesque greatness. In spite of Prof. Van Dyke x), this is one of the most impressing Rembrandts in the world.

■) Cf. John. C. Van Dyke, Rembrandt and his Schobt. N.-York, Scribner 1923. The writer denies this picture as a Rembrandt.