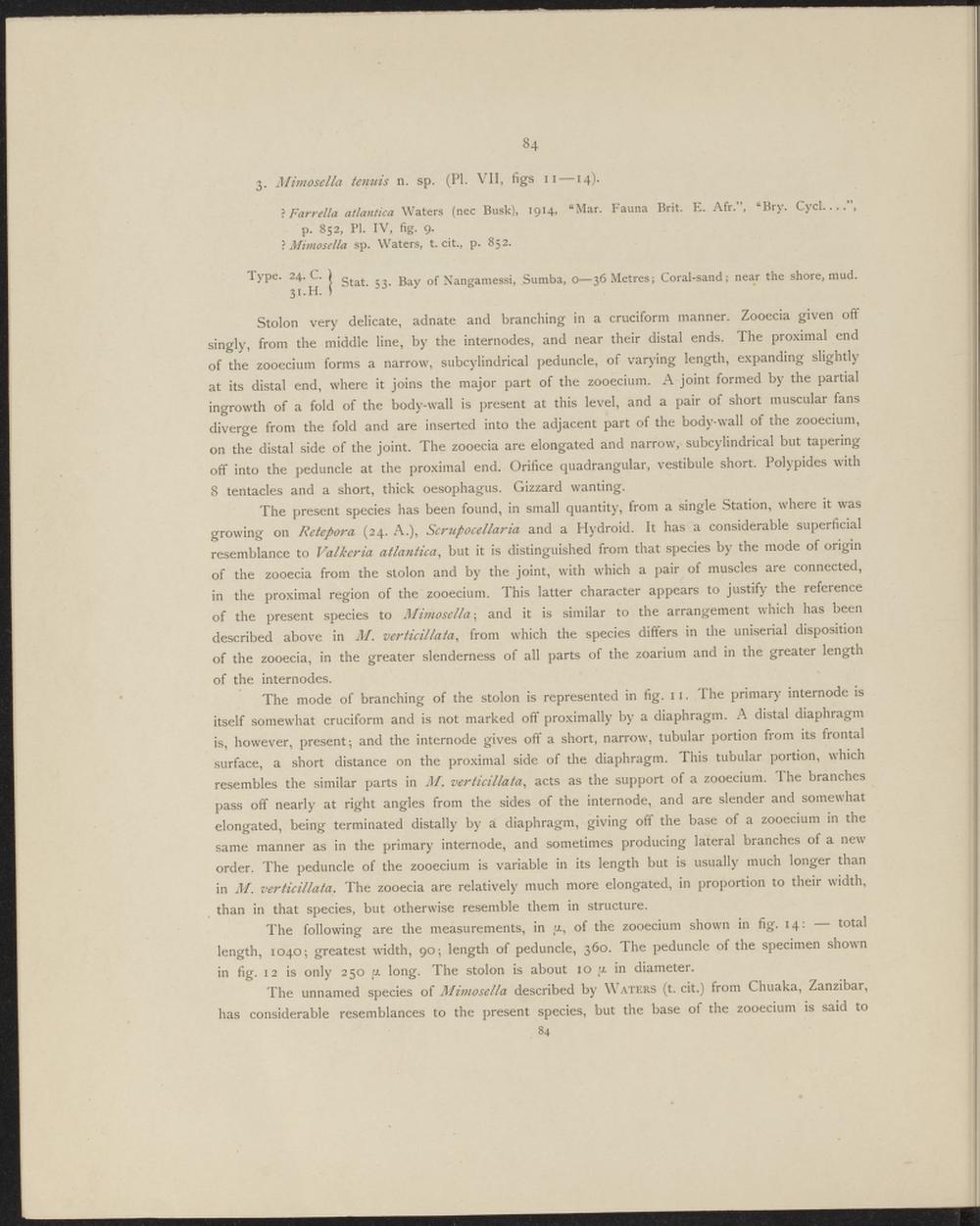 Stolon very delicate, adnate and branching in a cruciform manner. Zooecia given off singly, from the middle line, by the internodes, and near their distal ends. The proximal end of the' zooecium forms a narrow, subcylindrical peduncle, of varying length, expanding slightly at its distal end, where it joins the major part of the zooecium. A joint formed by the partial ingrowth of a fold of the body-wall is present at this level, and a pair of short muscular fans diverge from the fold and are inserted into the adjacent part of the body-wall of the zooecium, on the distal side of the joint. The zooecia are elongated and narrow, subcylindrical but tapering off into the peduncle at the proximal end. Orifice quadrangular, vestibule short. Polypides with 8 tentacles and a short, thick oesophagus. Gizzard wanting.

The present species has been found, in small quantity, from a single Station, where it was growing on Retepora (24. A.), Scrupocellaria and a Hydroid. It has a considerable superficial resemblance to Valkeria atlantica, but it is distinguished from that species by the mode of origin of the zooecia from the stolon and by the joint, with which a pair of muscles are connected, in the proximal region of the zooecium. This latter character appears to justify the reference of the present species to Mimosella-, and it is similar to the arrangement which has been described above in M. verticillata, from which the species differs in the uniserial disposition of the zooecia, in the greater slenderness of all parts of the zoarium and in the greater length of the internodes.

The mode of branching of the stolon is represented in fig. 11. The primary internode is itself somewhat cruciform and is not marked off proximally by a diaphragm. A distal diaphragm is, however, present; and the internode gives off a short, narrow, tubular portion from its frontal surface, a short distance on the proximal side of the diaphragm. This tubular portion, which resembles the similar parts in M. verticillata, acts as the support of a zooecium. The branches pass off nearly at right angles from the sides of the internode, and are slender and somewhat elongated, being terminated distally by a diaphragm, giving off the base of a zooecium in the same manner as in the primary internode, and sometimes producing lateral branches of a new order. The peduncle of the zooecium is variable in its length but is usually much longer than in M. verticillata. The zooecia are relatively much more elongated, in proportion to their width, than in that species, but otherwise resemble them in structure.

The unnamed species of Mimosella described by Waters (t. cit.) from Chuaka, Zanzibar, has considerable resemblances to the present species, but the base of the zooecium is said to