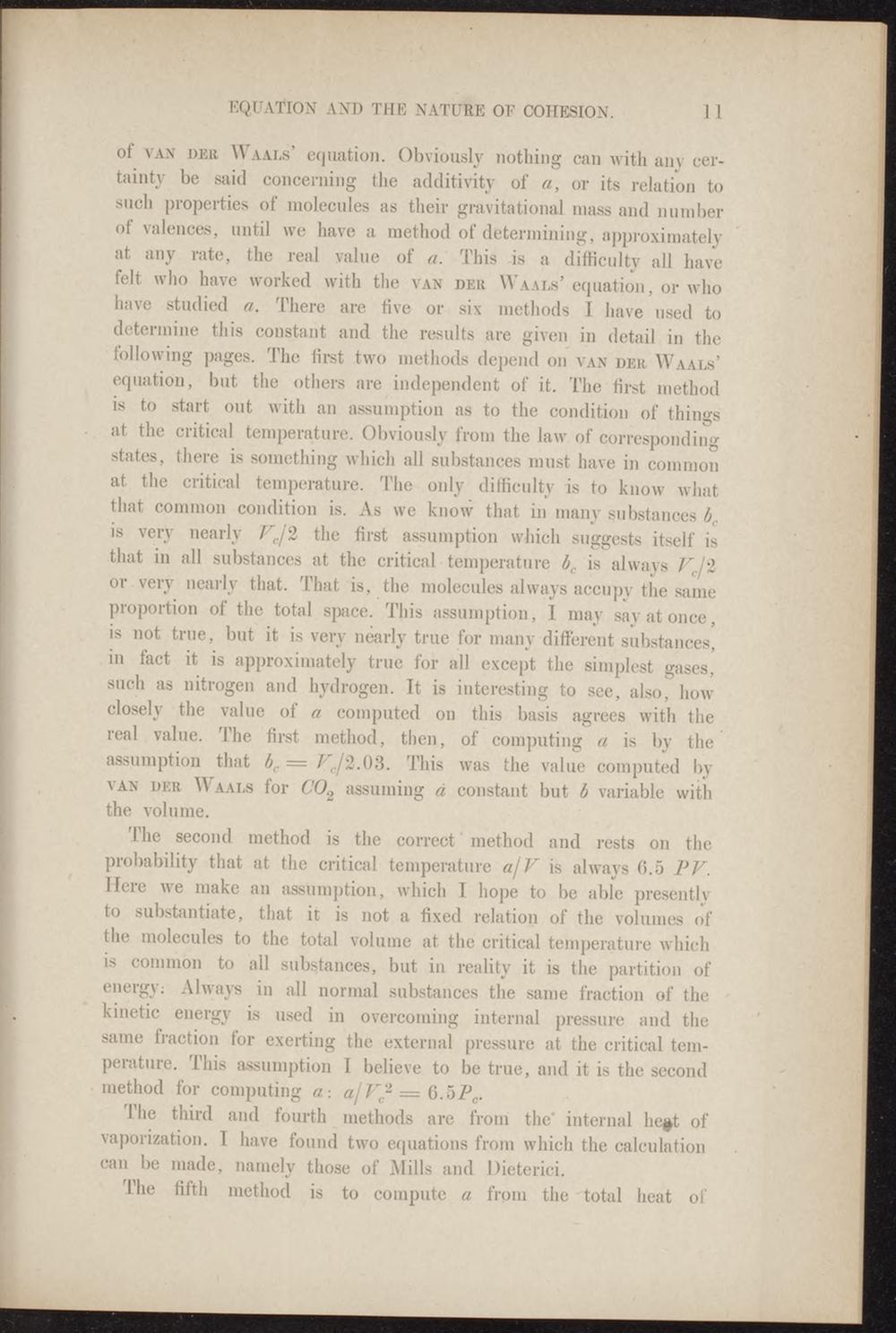 ÉQUATION AND THE NATURE OP COHESION.

of van der Waals' équation. Obviously nothing can with any certainty be said concerning the additivity of a, or its relation to such properties of molecules as their gravitational mass and number of valences, until we have a method of determining, approximately at any rate, the real value of a. This is a difficulty all have feit who have worked with the van der Waals' équation, or who have studied a. There are five or six methods I have'used to determine this constant and the results are given in detail in the following pages. The first two methods depend on van der Waals' équation, but the others are independent of it. The first method is to start out with an assumption as to the condition of things at the critical temperature. Obviously from the law of correspondinostates, there is something which all substances must have in common at the critical temperature. The only difficulty is to know what that common condition is. As we know that in many substances bc is very nearly Vej2 the first assumption which suggests itself is that in all substances at the critical temperature bc is always VJ2 or very nearly that. That is, the molecules always accupy the same proportion of the total space. This assumption, I may sayatonce, is not true, but it is very nèarly true for many different substances' in fact it is approximately true for all except the simplest gases,' such as nitrogen and hydrogen. It is interesting to see, also, how closely the value of a computed on this basis agrees with the real value. The first method, then, of computing a is by the' assumption that bc = F"c/2.03. This was the value computed by van der Waals for C02 assuming d constant but b variable with the volume.

The second method is the correct' method and rests on the probability that at the critical temperature a\V is always 6.5 TV. Here we make an assumption, which I hope to be able presently to substantiate, that it is not a fixed relation of the volumes of the molecules to the total volume at the critical temperature which is common to all substances, but in reality it is the partition of energy: Always in all normal substances the same fraction of the kinetic energy is used in overcoming internal pressure and the same fraction for exerting the external pressure at the critical temperature. This assumption I believe to be true, and it is the second method for computing a-. a\V2 = 6.5PC.

The third and fourth methods are from the' internal he§t of vaporization. I have found two équations from which the calculation can be made, namely those of Mills and Dieterici.