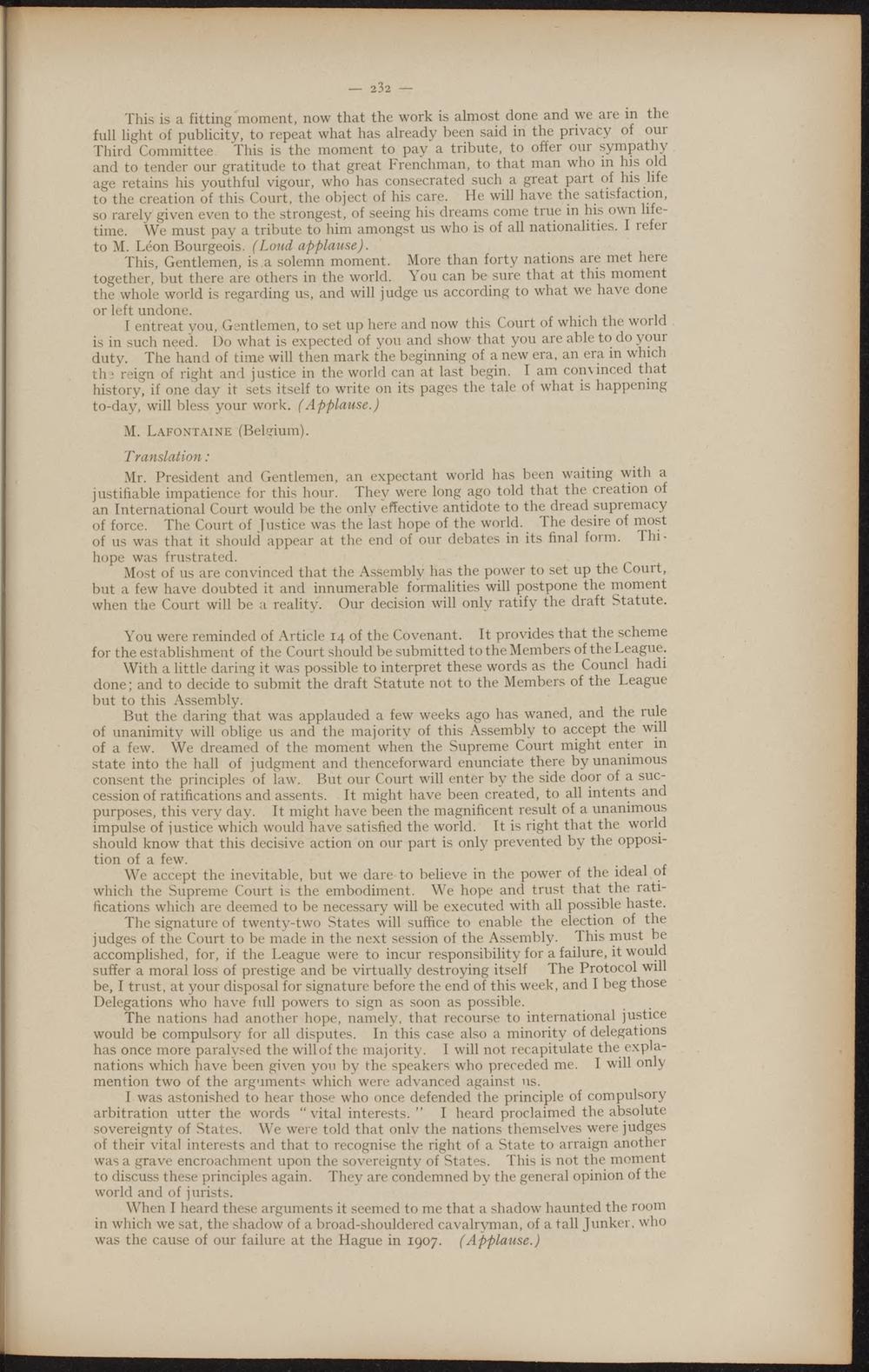 This is a fitting moment, now that the work is almost done and we are in the full light of publicity, to repeat what has already been said in the privacy of our Third Committee This is the moment to pay a tribute, to offer our sympathy and to tender our gratitude to that great Frenchman, to that man who m his old age retains his youthful vigour, who has consecrated such a great part of his hfe to the création of this Court, the object of his care. He wil] have the satisfaction, so rarely given even to the strongest, of seeing his dreams come true in his own hfetime. We must pay a tribute to him amongst us who is of all nationalities. I refer to M. Léon Bourgeois. (Loud applause).

This, Gentlemen, is.a solemn moment. More than forty nations are met here together, but there are others in the world. You can be sure that at this moment the whole world is regarding us, and will judge us according to what we have done or left undone.

I entreat you, Gentlemen, to set up here and now this Court of which the worfd is in such need. Do what is expected of you and show that you are able to do your duty. The hand of time will then mark the beginning of a new era, an era in which the reign of right and justice in the world can at last begin. I am convinced that history, if one day it sets itself to write on its pages the tale of what is happening to-day, will bless your work. (Applause.)

Mr. President and Gentlemen, an expectant world has been waiting with a justifiable impatience for this hour. Thev were long ago told that the création of an International Court would be the only effective antidote to the dread supremacy of force. The Court of Justice was the last hope of the world. The desire of most of us was that it should appear at the end of our debates in its final form. Thihope was frustrated.

Most of us are convinced that the Assembly has the power to set up the Court, but a few have doubted it and innumerable formalities will postpone the moment when the Court will be a reality. Our decision will only ratify the draft Statute.

You were reminded of Article 14 of the Covenant. It provides that the scheme for the establishment of the Court should be submitted to the Members of the League.

With a little daring it was possible to interpret these words as the Councl hadi done; and to decide to submit the draft Statute not to the Members of the League but to this Assembly.

But the daring that was applauded a few weeks ago has waned, and the rule of unanimity will oblige us and the majority of this Assembly to accept the will of a few. We dreamed of the moment when the Suprème Court might enter in state into the hall of judgment and thenceforward enunciate there by unanimous consent the principles of law. But our Court will enter by the side door of a succession of ratifications and assents. It might have been created, to all intents and purposes, this very day. It might have been the magnificent result of a unanimous impulse of justice which would have satisfied the world. It is right that the world should know that this décisive action on our part is only prevented by the opposition of a few.

We accept the inevitable, but we dare to believe in the power of the ideal of which the Suprème Court is the embodiment. We hope and trust that the ratifications which are deemed to be necessary will be executed with all possible haste.

The signature of twenty-two States will suffice to enable the election of the judges of the Court to be made in the next session of the Assembly. This must be accomplished, for, if the League were to incur responsibility for a failure, it would suffer a moral loss of prestige and be virtually destroying itself The Protocol will be, I trust, at your disposal for signature before the end of this week, and I beg those Délégations who have full powers to sign as soon as possible.

The nations had another hope, namely, that recourse to international justice would be compulsory for all disputes. In this case also a minority of délégations has once more paralysed the willof the majority. I will not recapitulate the explanations which have been given you by the speakers who preceded me. I will only mention two of the arguments which were advanced against us.

I was astonished to hear those who once defended the principle of compulsory arbitration utter the words "vital interests. " I heard proclaimed the absolute sovereignty of States. We were told that onlv the nations themselves were judges of their vital interests and that to recognise the right of a State to arraign another was a grave encroachment upon the sovereignty of States. This is not the moment to discuss these principles again. They are condemned by the general opinion of the world and of jurists.

When I heard these arguments it seemed to me that a shadow haunfed the room in which we sat, the shadow of a broad-shouldered cavalryman, of a tall Junker, who was the cause of our failure at the Hague in 1907. (Applause.)