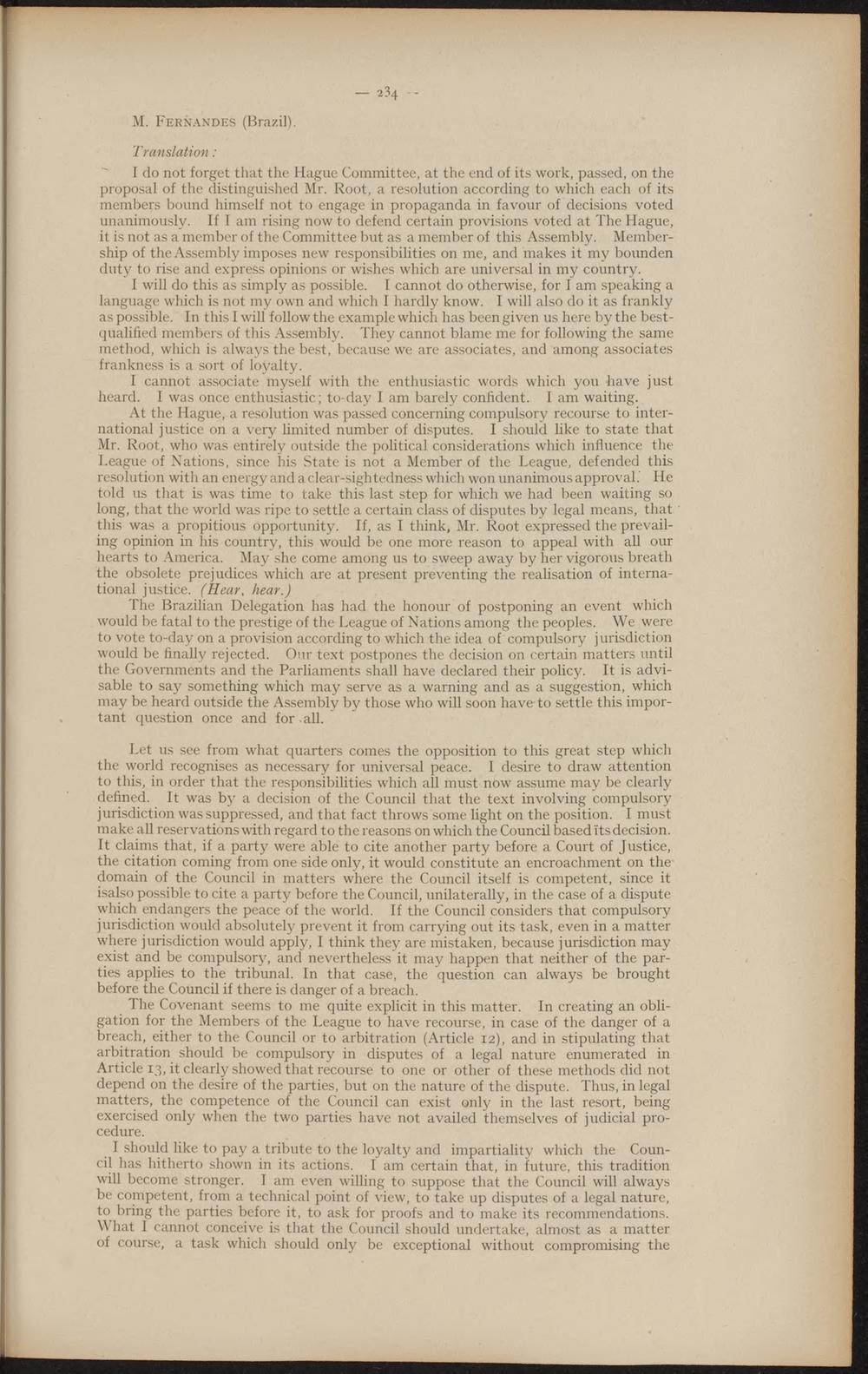 I do not forget that the Hague Committee, at the end of its work, passed, on the proposal of the distinguished Mr. Root, a résolution according to which each of its members bound himself not to engage in propaganda in favour of décisions voted unanimously. If I am rising now to defend certain provisions voted at The Hague, it is not as a member of the Committee but as a member of this Assembly. Membership of the Assembly imposes new responsibilities on me, and makes it my bounden duty to rise and express opinions or wishes which are universal in my country.

I will do this as simply as possible. I cannot do otherwise, for I am speaking a language which is not my own and which I hardly know. I will also do it as frankly as possible. In this I will follow the example which has been given us here by the bestquahfied members of this Assembly. They cannot blame me for following the same method, which is always the best, because we are associates, and among associates frankness is a sort of loyalty.

I cannot associate myself with the enthusiastic words which you have just heard. I was once enthusiastic; to-day I am barely confident. I am waiting.

At the Hague, a résolution was passed concerning compulsory recourse to international justice on a very hmited number of disputes. I should hke to state that Mr. Root, who was entirely outside the pohtical considérations which influence the League of Nations, since his State is not a Member of the League, defended this résolution with an energy and a clear-sightedness which won unanimous approval.' He told us that is was time to take this last step for which we had been waiting so long, that the world was ripe to settle a certain class of disputes by legal means, that this was a propitious opportunity. If, as I think, Mr. Root expressed the prevailing opinion in his country, this would be one more reason to appeal with all our hearts to America. May she come among us to sweep away by her vigorous breath the obsolete prejudices which are at present pre venting the realisation of international justice. (Hear, hear.)

The BraziÜan Délégation has had the honour of postponing an event which would be fatal to the prestige of the League of Nations among the peoples. We were to vote to-day on a provision according to which the idea of compulsory jurisdiction would be finally rejected. Our text postpones the decision on certain matters until the Governments and the Parliaments shall have declared their policy. It is advisable to say something which may serve as a warning and as a suggestion, which may be heard outside the Assembly by those who will soon have-to settle this important question once and for .all.

Let us see from what quarters comes the opposition to this great step which the world recognises as necessary for universal peace. I desire to draw attention to this, in order that the responsibilities which all must now assume may be clearly defined. It was by a decision of the Council that the text involving compulsory jurisdiction was suppressed, and that fact throws some light on the position. I must make all reservations with regard to the reasons on which the Council based ïts decision. It claims that, if a party were able to cite another party before a Court of Justice, the citation coming from one side only, it would constitute an encroachment on thedomain of the Council in matters where the Council itself is competent, since it isalso possible to cite a party before the Council, unilaterally, in the case of a dispute which endangers the peace of the world. If the Council considers that compulsory jurisdiction would absolutely prevent it from carrying out its task, even in a matter where jurisdiction would apply, I think they are mistaken, because jurisdiction may exist and be compulsory, and nevertheless it may happen that neither of the parties applies to the tribunal. In that case, the question can always be brought before the Council if there is danger of a breach.

The Covenant seems to me quite explicit in this matter. In creating an obligation for the Members of the League to have recourse, in case of the danger of a breach, either to the Council or to arbitration (Article 12), and in stipulating that arbitration should be compulsory in disputes of a legal nature enumerated in Article 13, it clearly showed that recourse to one or other of these methods did not depend on the desire of the parties, but on the nature of the dispute. Thus, in legal matters, the compétence of the Council can exist only in the last resort, being exercised only when the two parties have not availed themselves of judicial procedure.

I should like to pay a tribute to the loyalty and impartiality which the Council has hitherto shown in its actions. I am certain that, in future, this tradition will become stronger. I am even wiUing to suppose that the Council will always be competent, from a technical point of view, to take up disputes of a legal nature, to bring the parties before it, to ask for proofs and to make its recommendations. What I cannot conceive is that the Council should ündertake, almost as a matter of course, a task which should only be exceptional without compromising the