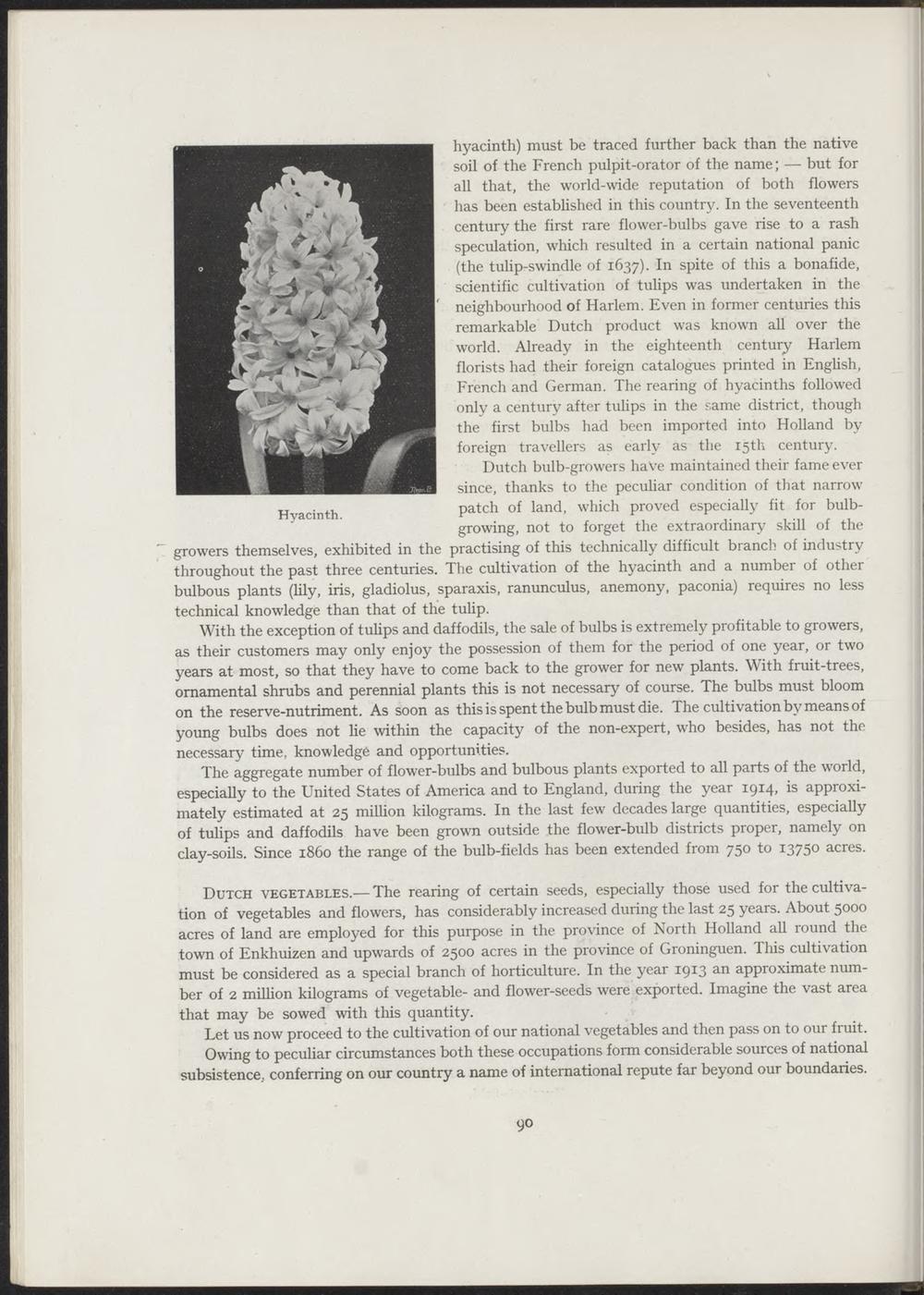 hyacinth) must be traced further back than the native soil of the French pulpit-orator of the name; — but for all that, the world-wide reputation of both flowers has been estabhshed in this country. In the seventeenth century the first rare flower-bulbs gave rise to a rash speculation, which resulted in a certain national panic (the tuhprswindle of 1637). In spite of this a bonafide, scientific cultivation of tulips was undertaken in the neighbourhood of Harlem. Even in former centuries this remarkable Dutch product was known all over the world. Already in the eighteenth century Harlem florists had their foreign catalogues printed in Enghsh, French and German. The rearing of hyacinths followed only a century after tulips in the same district, though the first bulbs had been imported into Holland by foreign travellers as early as the I5th century.

Dutch bulb-growers have maintained their fame ever since, thanks to the pecuhar condition of that narrow

growing, not to forget the extraordinary skill of the growers themselves, exhibited in the practising of this technicahy difficult branch of industry throughout the past three centuries. The cultivation of the hyacinth and a number of other bulbous plants (lüy, iris, gladiolus, sparaxis, ranunculus, anemony, paconia) requires no less technical knowledge than that of the tulip.

With the exception of tulips and daffodils, the sale of bulbs is extremely profitable to growers, as their customers may only enjoy the possession of them for the period of one year, or two years at most, so that they have to come back to the grower for new plants. With fruit-trees, ornamental shrubs and perennial plants this is not necessary of course. The bulbs must bloom on the reserve-nutriment. As éoon as this is spent the bulb must die. The cultivation by means of young bulbs does not he within the capacity of the non-expert, who besides, has not the necessary time, knowledge and opportumties.

The aggregate number of flower-bulbs and bulbous plants exported to all parts of the world, especiaUy to the United States of America and to England, during the year 1914, is approximately estimated at 25 million kilograms. In the last few decades large quantities, especiaUy of tulips and daffodüs have been grown outside the flower-bulb districts proper, namely on clay-soüs. Since 1860 the range of the bulb-fields has been extended from 750 to 13750 acres.

Dutch vegetables—The rearing of certain seeds, especiaUy those used for the cultivation of vegetables and flowers, has considerably increased during the last 25 years. About 5000 acres of land are employed for this purpose in the province of North HoUand aU round the town of Enkhuizen and upwards of 2500 acres in the province of Groninguen. This cultivation must be considered as a special branch of horticulture. In the year 1913 an approximate number of 2 million küograms of vegetable- and flower-seeds were exported. Imagine the vast area that may be sowed with this quantity.

Let us now proceed to the cultivation of our national vegetables and then pass on to our fruit.

Owing to pecuhar circumstances both these occupations form considerable sources of national subsistence.. conferring on our country a name of international repute far beyond our boundaries.