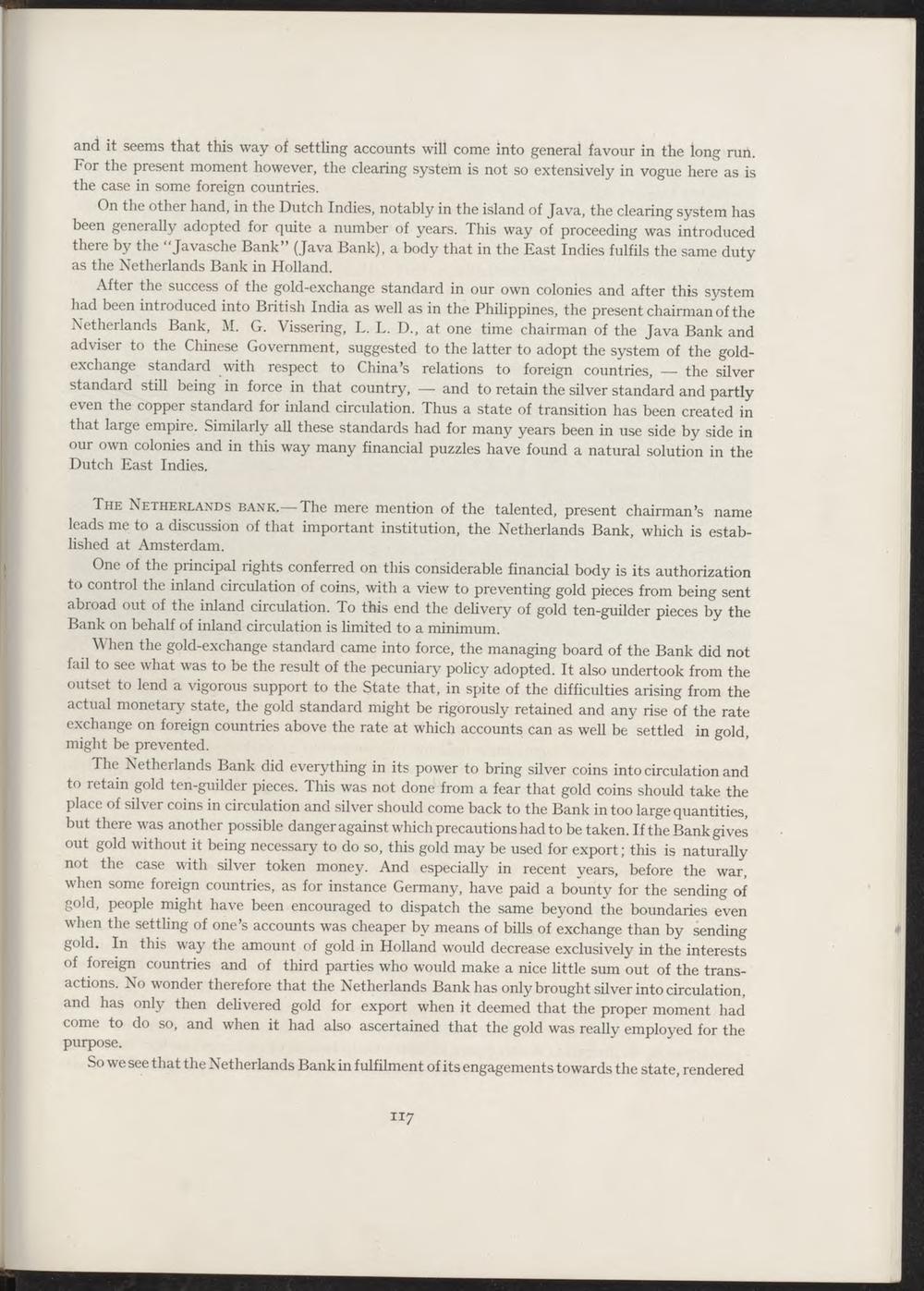 and it seems that this way of settling accounts will come into general favour in the long run. For the present moment however, the clearing system is not so extensively in vogue here as is the case in some foreign countries.

On the other hand, in the Dutch Indies, notably in the island of Java, the clearing system has been generally adopted for quite a number of years. This way of proceeding was introduced there by the "Javasche Bank" (Java Bank), a body that in the East Indies fulfils the same duty as the Netherlands Bank in Holland.

After the success of the gold-exchange Standard in our own colonies and after this system had been introduced into British India as well as in the Phihppines, the present chairmanof the Netherlands Bank, M. G. Vissering, L. L. D., at one time chairman of the Java Bank and adviser to the Chinese Government, suggested to the latter to adopt the system of the goldexchange Standard with respect to China's relations to foreign countries, — the silver Standard still being in force in that country, — and to retain the silver Standard and partly even the copper Standard for inland circidation. Thus a state of transition has been created in that large empire. Simüarly all these standards had for many years been in use side by side in our own colonies and in this way many financial puzzles have found a natural solution in the Dutch East Indies.

The Netherlands bank,—The mere mention of the talented, present chairman's name leads me to a discussion of that important institution, the Netherlands Bank, which is estabhshed at Amsterdam.

When the gold-exchange Standard came into force, the managing board of the Bank did not fail to see what was to be the result of the pecuniary pohcy adopted. It also undertook from the outset to lend a vigorous support to the State that, in spite of the difficulties arising from the actual monetary state, the gold Standard might be rigorously retained and any rise of the rate exchange on foreign countries above the rate at which accounts can as well be settled in gold, might be prevented.

The Netherlands Bank did everything in its power to bring silver coins into circulation and to retain gold ten-guilder pieces. This was not done from a fear that gold coins should take the place of silver coins in circulation and silver should come back to the Bank in too large quantities, but there was another possible danger against which precautions had to betaken. If the Bank gives out gold without it being necessary to do so, this gold may be used for export; this is naturally not the case with silver token money. And especiaUy in recent years, before the war, when some foreign countries, as for instance Germany, have paid a bounty for the sending of gold, people might have been encouraged to dispatch the same beyond the boundaries even when the settling of one's accounts was cheaper by means of büls of exchange than by sending gold. In this way the amount of gold in HoUand would decrease exclusively in the interests of foreign countries and of third parties who would make a nice httle sum out of the transactions. No wonder therefore that the Netherlands Bank has only brought süver into circulation, and has only then dehvered gold for export when it deemed that the proper moment had come to do so, and when it had also ascertained that the gold was reaUy employed for the purpose.

So we see that the Netherlands Bank in fulfilment of its engagements towards the state, rendered