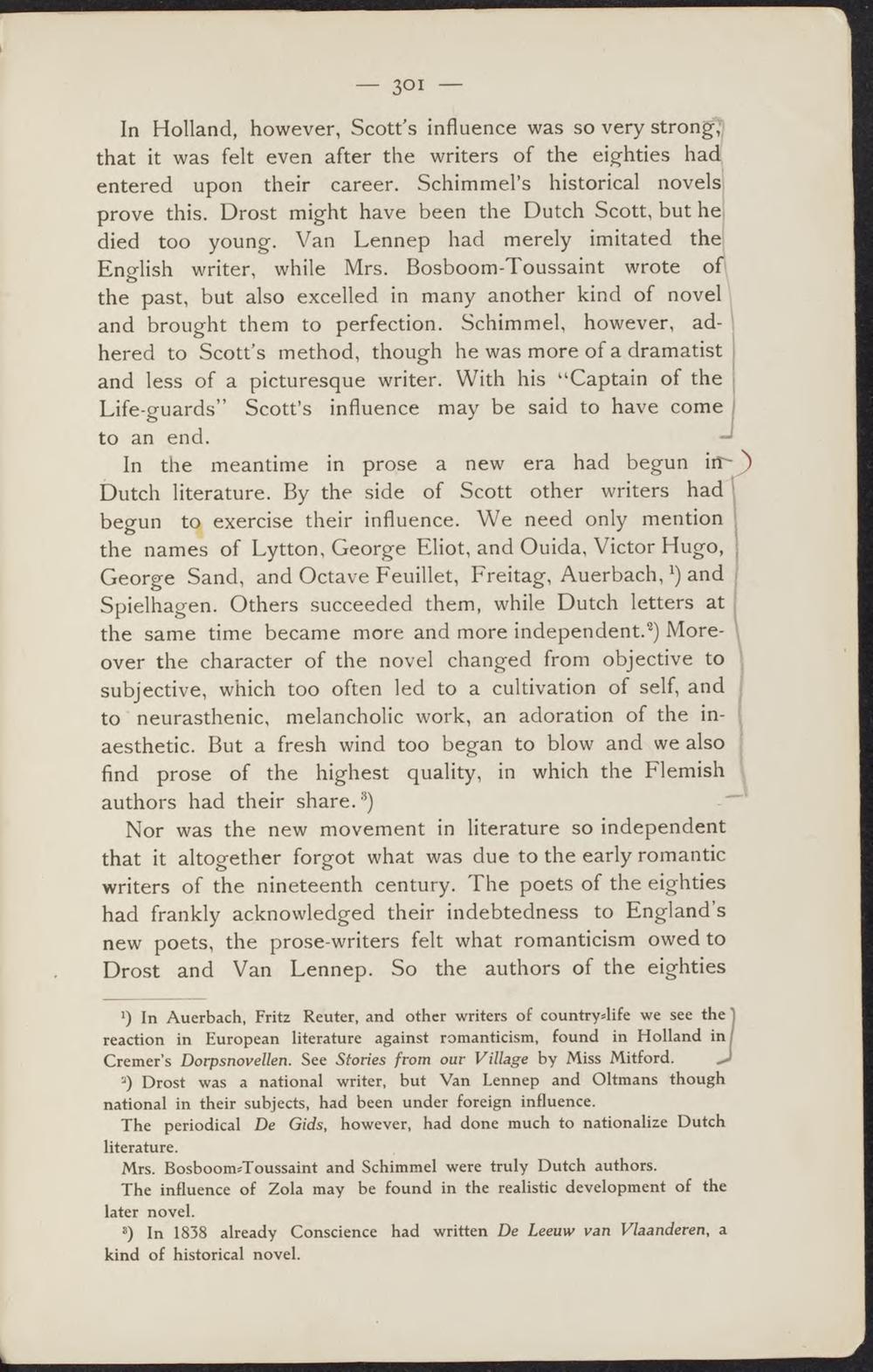 In Holland, however, Scott's influence was so very strong^ that it was feit even after the writers of the eighties had! entered upon their career. Schimmel's historical novelsj prove this. Drost might have been the Dutch Scott, but he died too young. Van Lennep had merely imitated the! English writer, while Mrs. Bosboom-Toussaint wrote ofl the past, but also excelled in many another kind of novel \ and brought them to perfection. Schimmel, however, ad- ] hered to Scott's method, though he was more of a dramatist and less of a picturesque writer. With his "Captain of the Life-guards" Scott's influence may be said to have come I to an end. -*

In the meantime in prose a new era had begun irr-J) Dutch literature. By the side of Scott other writers had 1 begun tq exercise their influence. We need only mention 1 the names of Lytton, George Eliot, and Ouida, Victor Hugo, j George Sand, and Octave Feuillet, Freitag, Auerbach, *) and I Spielhagen. Others succeeded them, while Dutch letters at the same time became more and more independent.8) More- \ over the character of the novel changed from objective to j subjective, which too often led to a cultivation of self, and I to neurasthenie, melancholie work, an adoration of the in- i aesthetic. But a fresh wind too began to blow and we also find prose of the highest quality, in which the Flemish authors had their share.8)

Nor was the new movement in literature so independent that it altogether forgot what was due to the early romantic writers of the nineteenth century. The poets of the eighties had frankly acknowledged their indebtedness to England's new poets, the prose-writers feit what romanticism owed to Drost and Van Lennep. So the authors of the eighties

]) In Auerbach, Fritz Reuter, and other writers of countrydife we see thel reaction in European literature against romanticism, found in Holland in/ Cremer's Dorpsnovellen. See Stories from our Village by Miss Mitford.

a) Drost was a national writer, but Van Lennep and Oltmans though national in their subjects, had been under foreign influence.

The periodical De Gids, however, had done much to nationalize Dutch literature.

Mrs. BosboomsToussaint and Schimmel were truly Dutch authors. The influence of Zola may be found in the realistic development of the later novel.