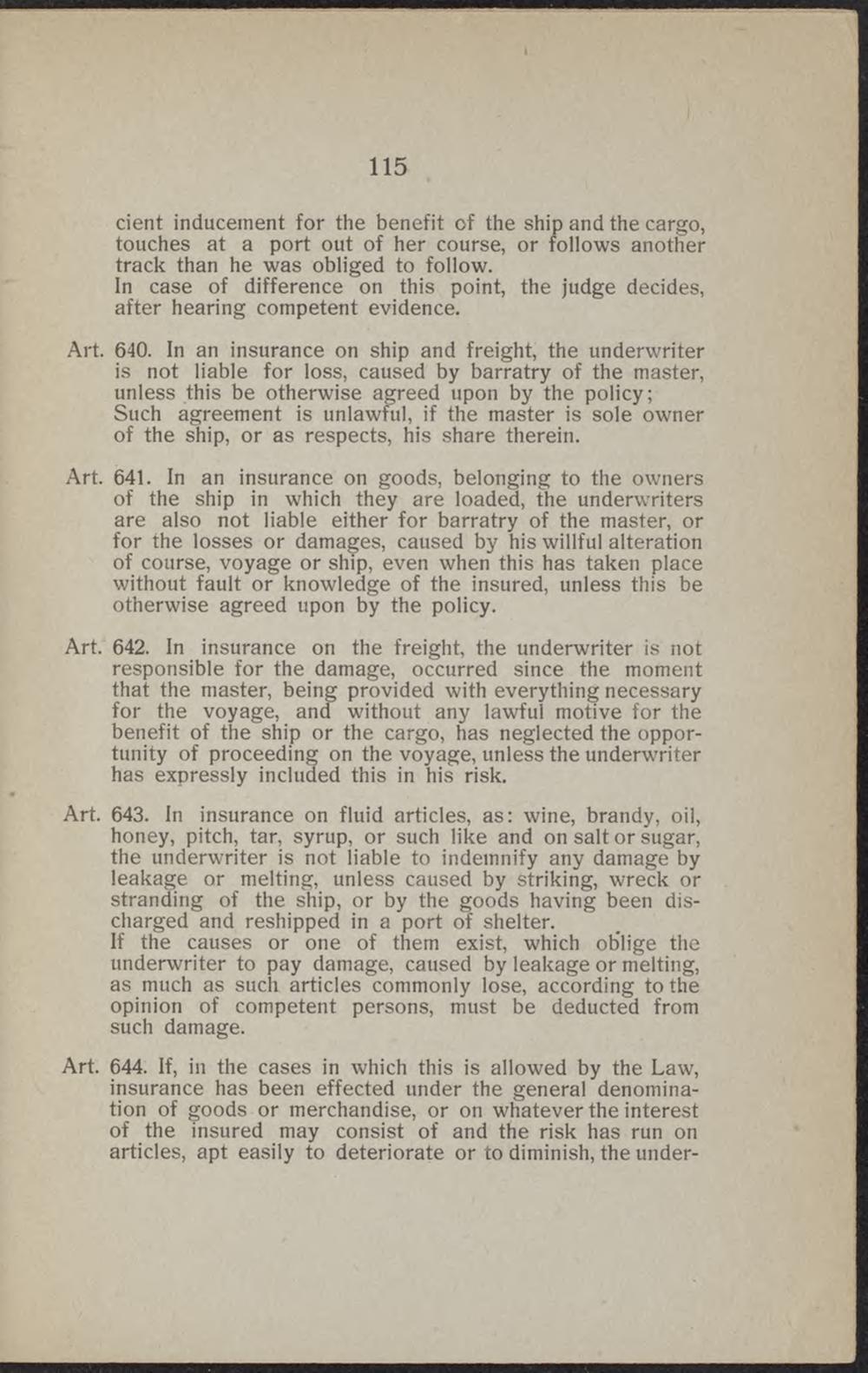 cient inducement for the benefit of the ship and the cargo, touches at a port out of her course, or follows another track than he was obliged to follow. In case of difference on this point, the judge decides, after hearing competent evidence.

Art. 640. In an insurance on ship and freight, the underwriter is not liable for loss, caused by barratry of the master, unless this be otherwise agreed upon by the policy; Such agreement is unlawful, if the master is sole owner of the ship, or as respects, his share therein.

Art. 641. In an insurance on goods, belonging to the owners of the ship in which they are loaded, the underwriters are also not liable either for barratry of the master, or for the losses or damages, caused by his willful alteration of course, voyage or ship, even when this has taken place without fault or knowledge of the insured, unless this be otherwise agreed upon by the policy.

Art.' 642. In insurance on the freight, the underwriter is not responsible for the damage, occurred since the moment that the master, being provided with everything necessary for the voyage, and without any lawful motive for the benefit of the ship or the cargo, nas neglected the opportunity of proceeding on the voyage, unless the underwriter has expressly included this in his risk.

Art. 643. In insurance on fluid articles, as: wine, brandy, oil, honey, pitch, tar, syrup, or such like and on salt or sugar, the underwriter is not liable to indemnify any damage by leakage or melting, unless caused by striking, wreek or stranding of the ship, or by the goods having been discharged and reshipped in a port of shelter. If the causes or one of them exist, which ob'lige the underwriter to pay damage, caused by leakage or melting, as much as such articles commonly lose, according to the opinion of competent persons, must be deducted from such damage.

Art. 644. If, in the cases in which this is allowed by the Law, insurance has been effected under the general denomination of goods or merchandise, or on whatever the interest of the insured may corrsist of and the risk has run on articles, apt easily to deteriorate or to diminish, the under-