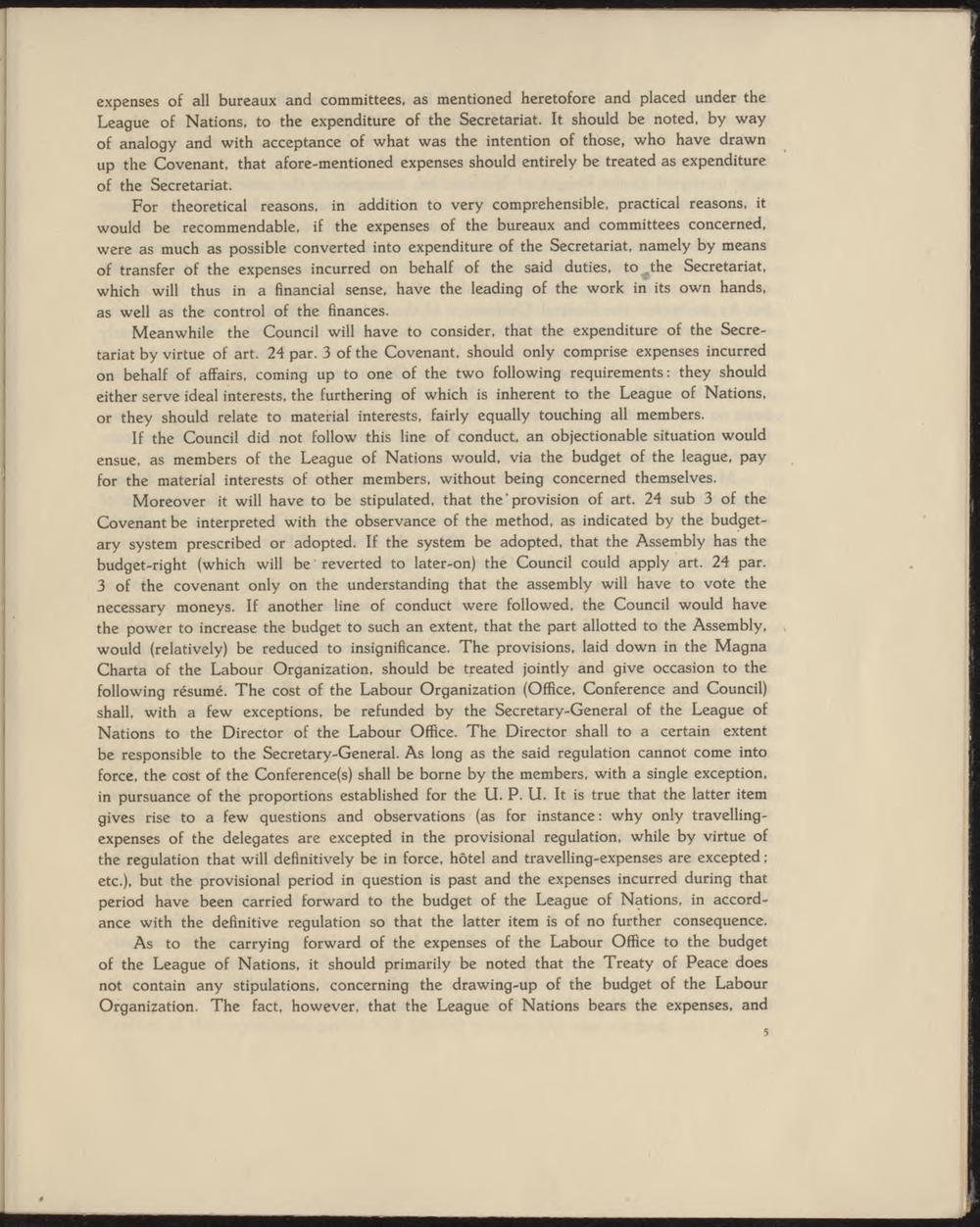 For theoretical reasons, in addition to very comprehensible, practical reasons, it would be recommendable, if the expenses of the bureaux and committees concerned, were as much as possible converted into expenditure of the Secretariat, namely by means of transfer óf the expenses incurred on behalf of the said duties, to the Secretariat, which will thus in a financial sense, have the leading of the work in its own hands, as well as the control of the finances.

Meanwhile the Council will have to consider, that the expenditure of the Secretariat by virtue of art. 24 par. 3 of the Covenant, should only comprise expenses incurred on behalf of affairs, coming up to one of the two following requirements: they should either serve ideal interests, the furthering of which is inherent to the League of Nations. or they should relate to material interests. fairly equally touching all members.

If the Council did not follow this line of conduct, an objectionable situation would ensue, as members of the League of Nations would, via the budget of the league, pay for the material interests of other members, without being concerned themselves.

Moreover it will have to be stipulated, that the' provision of art. 24 sub 3 of the Covenant be interpreted with the observance of the method, as indicated by the budgetary system prescribed or adopted. If the system be adopted, that the Assembly has the budget-right (which will be' reverted to later-on) the Council could apply art. 24 par. 3 of the covenant only on the understanding that the assembly will have to vote the necessary moneys. If another line of conduct were followed, the Council would have the power to increase the budget to such an extent, that the part allotted to the Assembly, would (relatively) be reduced to insignificance. The provisions, laid down in the Magna Charta of the Labour Organization, should be treated jointly and give occasion to the following résumé. The cost of the Labour Organization (Office, Conference and Council) shall, with a few exceptions, be refunded by the Secretary-General of the League of Nations to the Director of the Labour Office. The Directer shall to a certain extent be responsible to the Secretary-General. As long as the said regulation cannot come into force, the cost of the Conference(s) shall be borne by the members, with a single exception, in pursuance of the proportions established for the U. P. U. It is true that the latter item gives rise to a few questions and observations (as for instance: why only travellingexpenses of the delegates are excepted in the provisional regulation, while by virtue of the regulation that will definitively be in force, hótel and travelling-expenses are excepted; etc), but the provisional period in question is past and the expenses incurred during that period have been carried forward to the budget of the League of Nations, in accordance with the definitive regulation so that the latter item is of no further consequence.

As to the carrying forward of the expenses of the Labour Office to the budget of the League of Nations, it should primarily be noted that the Treaty of Peace does not contain any stipulations, concerning the drawing-up of the budget of the Labour Organization. The fact, however, that the League of Nations bears the expenses, and