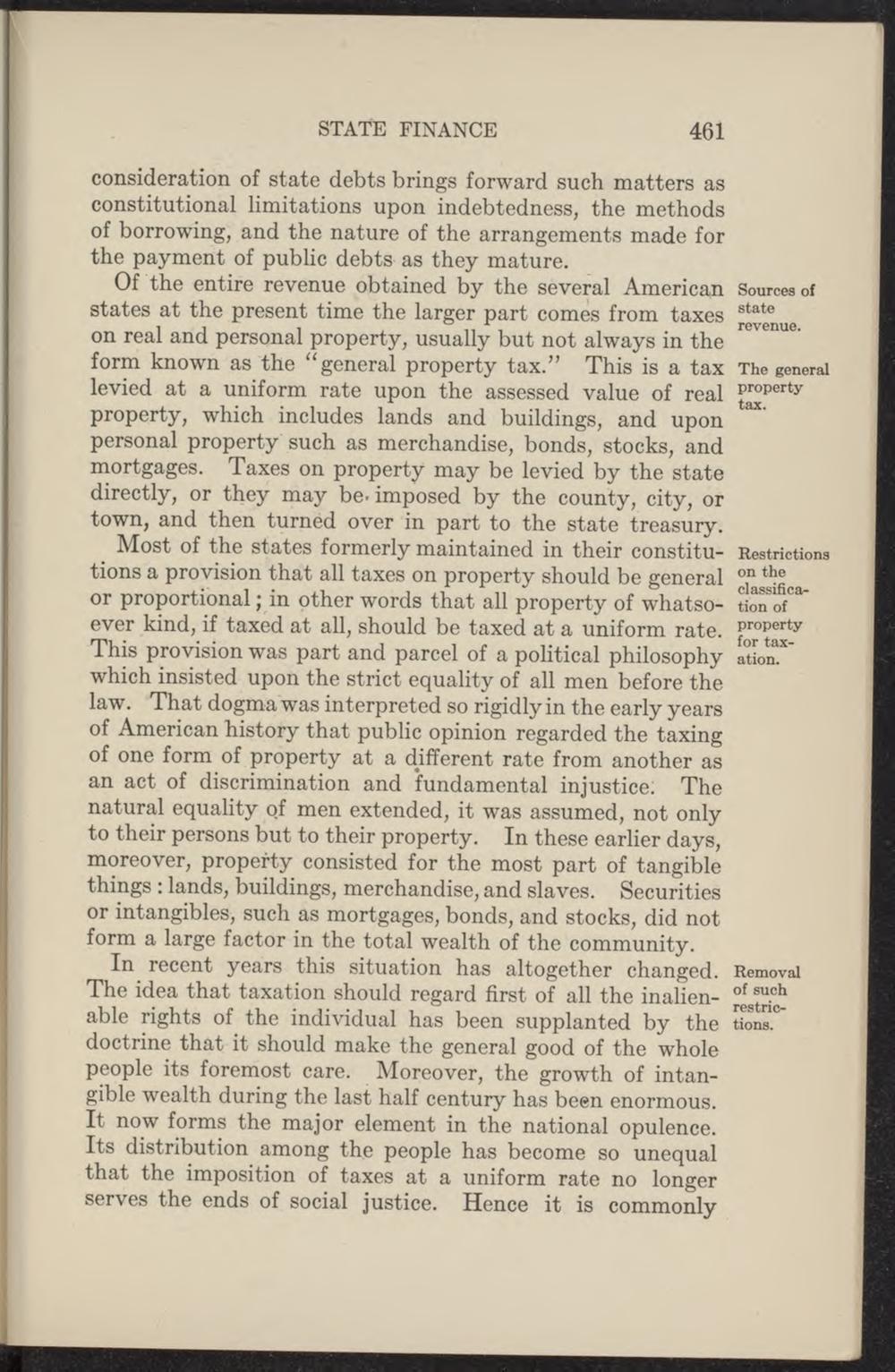 consideration of state debts brings forward such matters as constitutional Hmitations upon indebtedness, the methods of borrowing, and the nature of the arrangements made for the payment of public debts- as they mature.

Of the entire revenue obtained by the several American states at the present time the larger part comes from taxes on real and personal property, usually but not always in the form known as the "general property tax." This is a tax levied at a uniform rate upon the assessed value of real property, which includes lands and buildings, and upon personal property such as merchandise, bonds, stocks, and mortgages. Taxes on property may be levied by the state directly, or they may be. imposed by the county, city, or town, and then turned over m part to the state treasury,

Most of the states formerly maintained in their constitutions a provision that all taxes on property should be general or proportional; in other words that all property of whatsoever kind, if taxed at all, should be taxed at a uniform rate. This provision was part and parcel of a pohtical philosophy which insisted upon the strict equahty of ah men before the law. That dogma was interpreted so rigidly in the early years of American history that public opinion regarded the taxing of one form of property at a different rate from another as an act of discrimination and fundamental injustice: The natural equality of men extended, it was assumed, not only to their persons but to their property. In these earlier days, moreover, property consisted for the most part of tangible things: lands, buildings, merchandise, and slaves. Seeurities or intangibles, such as mortgages, bonds, and stocks, did not form a large factor in the total wealth of the eommunity.

In recent years this situation has altogether changed. The idea that taxation should regard first of all the inalienable rights of the individual has been supplanted by the doctrine that it should make the general good of the whole people its foremost care. Moreover, the growth of intangible wealth during the last half century has been enormous. It now forms the major element in the national opulence. Its distribution among the people has become so unequal that the imposition of taxes at a uniform rate no longer serves the ends of social justice. Hence it is commonly

Restrictions on the classification of property for taxation.