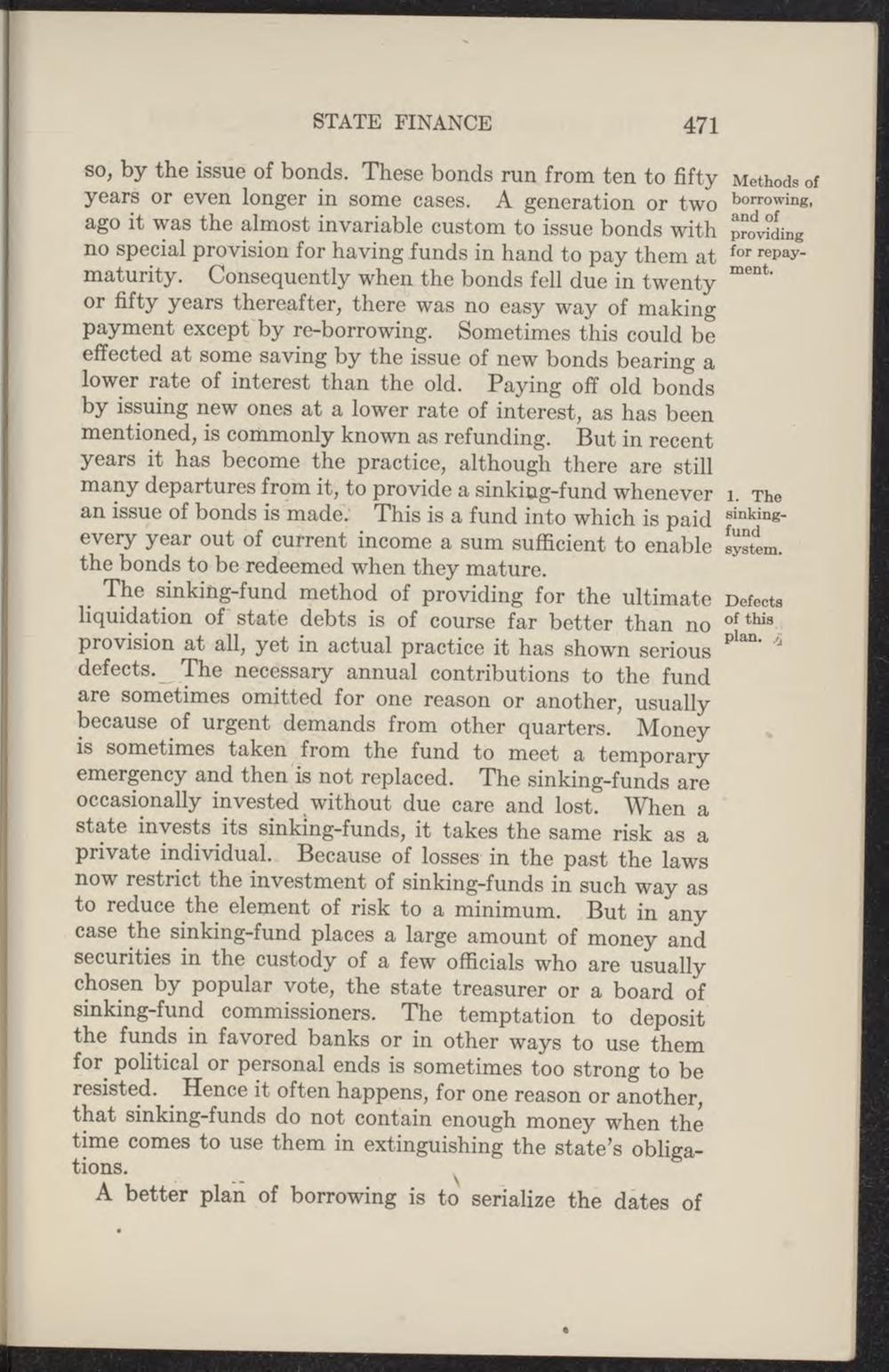 so, by the issue of bonds. These bonds run from ten to fifty years or even longer in some cases. A generation or two ago it was the almost invariable custom to issue bonds with ho special provision for having funds in hand to pay them at maturity. Consequently when the bonds feil due in twenty or fifty years thereafter, there was no easy way of making payment except by re-borrowing. Sometimes this could be effected at some saving by the issue of new bonds bearing a lower rate of interest than the old. Paying off old bonds by issuing new ones at a lower rate of interest, as has been mentioned, is commonly known as refunding. But in recent years it has become the practice, although there are still many departures from it, to provide a sinking-fund whenever an issue of bonds is made. This is a fund into which is paid every year out of current income a sum sufficiënt to enable the bonds to be redeemed when they mature.

The sinking-fund method of providing for the ultimate liquidation of state debts is of course far better than no provision at all, yet in actual practice it has shown serious defects. The necessary annual contributions to the fund are sometimes omitted for one reason or another, usually because of urgent demands from other quarters. Money is sometimes taken from the fund tó meet a temporary emergency and then is not replaced. The sinking-funds are occasionahy invested without due care and lost. When a state invests its sinking-funds, it takes the same risk as a private individual. Because of losses in the past the laws now restrict the investment of sinking-funds in such way as to reduce the element of risk to a minimum. But in any case the sinking-fund places a large amount of money and seeurities in the custody of a few officials who are usually chosen by popular vote, the state treasurer or a board of sinking-fund commissioners. The temptation to deposit the funds in favored banks or in other ways to use them for pohtical or personal ends is sometimes too strong to be resisted. Hence it often happens, for one reason or another, that sinking-funds do not contain enough money when the* time comes to use them in extmguishing the state's obhgations.

A better plan of borrowing is to seriahze the dates of

Methods of borrowing, and of providing for repayment.