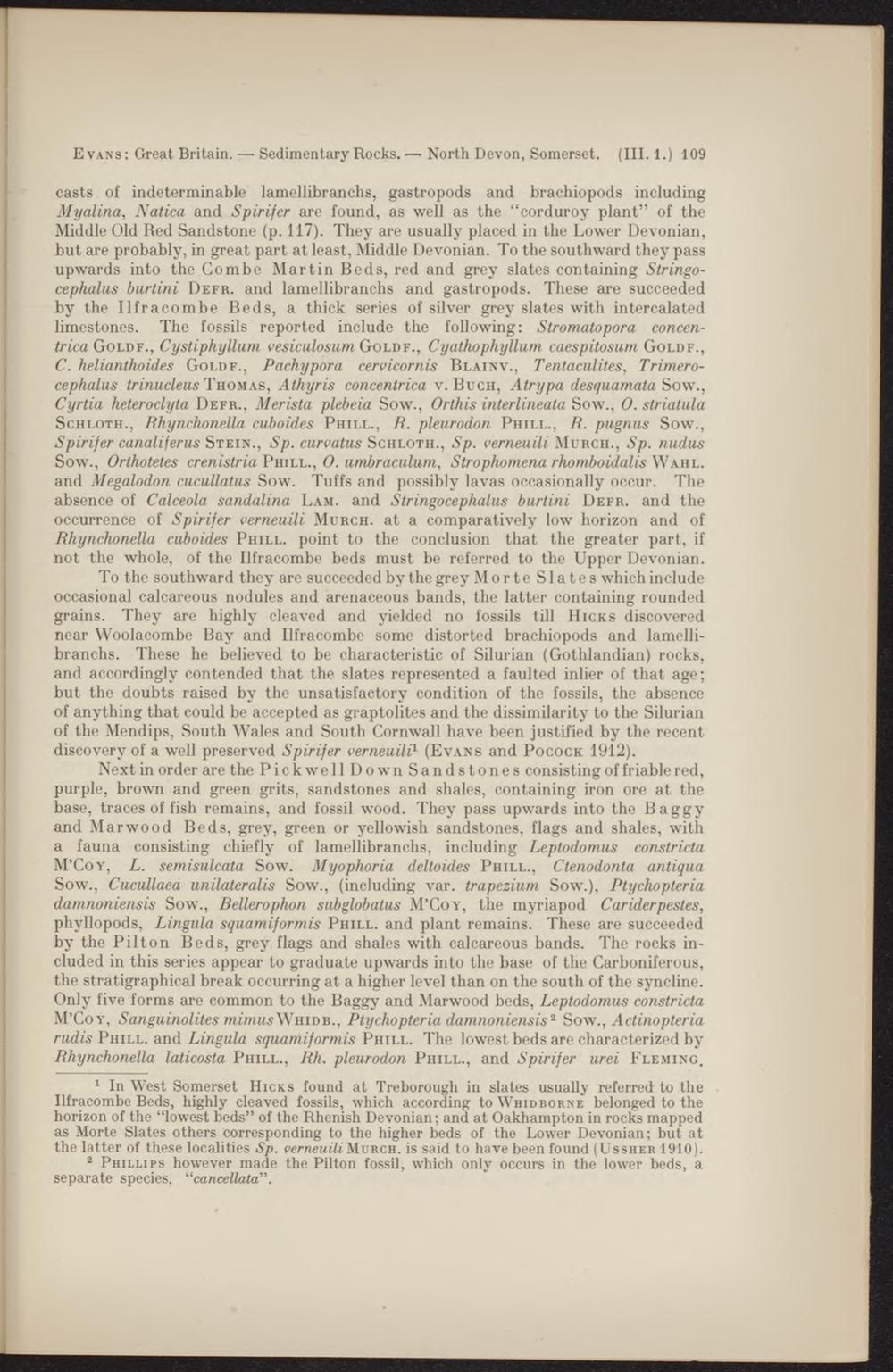 To the southward they are succeeded by the grey Morte Slates which include occasional calcareous nodules and arenaceous bands, the latter containing rounded grains. They are highly cleaved and yielded no fossils till Hicks discovered near Woolacombe Bay and Ilfracombe some distorted brachiopods and lameUibranchs. These he believed to be characteristic of Silurian (Gothlandian) rocks, and accordingly contended that the slates represented a faulted inlier of that age; but the doubts raised by the unsatisfactory condition of the fossils, the absence of anything that could be accepted as graptolites and the dissimilarity to the Silurian of the Mendips, South Wales and South Cornwall have been justified by the recent discovery of a well preserved Spirifer verneuili?- (Evans and Pocock 1912).

Next in order are the Pickwell Down Sandstones consisting of friable red, purple, brown and green grits, sandstones and shales, containing iron ore at the base, traces of fish remains, and fossil wood. They pass upwards into the Baggy and Marwood Beds, grey, green or yellowish sandstones, flags and shales, with a fauna consisting chiefly of lameUibranchs, including Leptodomus constricta M'Coy, L. semisulcata Sow. Myophoria deltoides Phill., Ctenodonta antiqua Sow., CucuUaea unilateralis Sow., (including var. trapezium Sow.), Ptychopteria damnoniensis Sow., BeUerophon subglobatus M'Coy, the myriapod Cariderpestes, phyllopods, Lingula squamiformis Phill. and plant remains. These are succeeded by the Pilton Beds, grey flags and shales with calcareous bands. The rocks included in this series appear to graduate upwards into the base of the Carboniferous, the stratigraphical break occurring at a higher level than on the south of the syncline. Only five forms are common to the Baggy and Marwood beds, Leptodomus constricta M'CoY, Sanguiholites mimusWaiDB., Ptychopteria damnoniensis* Sow., Actinopteria rudis Phill. and Lingula squamiformis Phill. The lowest beds are characterized by Rhynchoneüa taticosta Phill., Rh. pleurodon Phill., and Spirifer urei Fleming.

1 In West Somerset Hicks found at Treborough in slates usually rèferred to thé Ilfracombe Beds, highly cleaved fossils, which according to Whidborne belonged to the horizon of the "lowest beds" of the Rhenish Devonian; and at Oakhampton in rocks mapped as Morte Slates others corresponding to the higher beds of the Lower Devonian; but at the latter of these localities Sp. verneuili Murch. is said to have been found (Ussher 1910).

2 Phillips however made the Pilton fossil, which only occurs in the lower beds, a separate species, "cancellata".