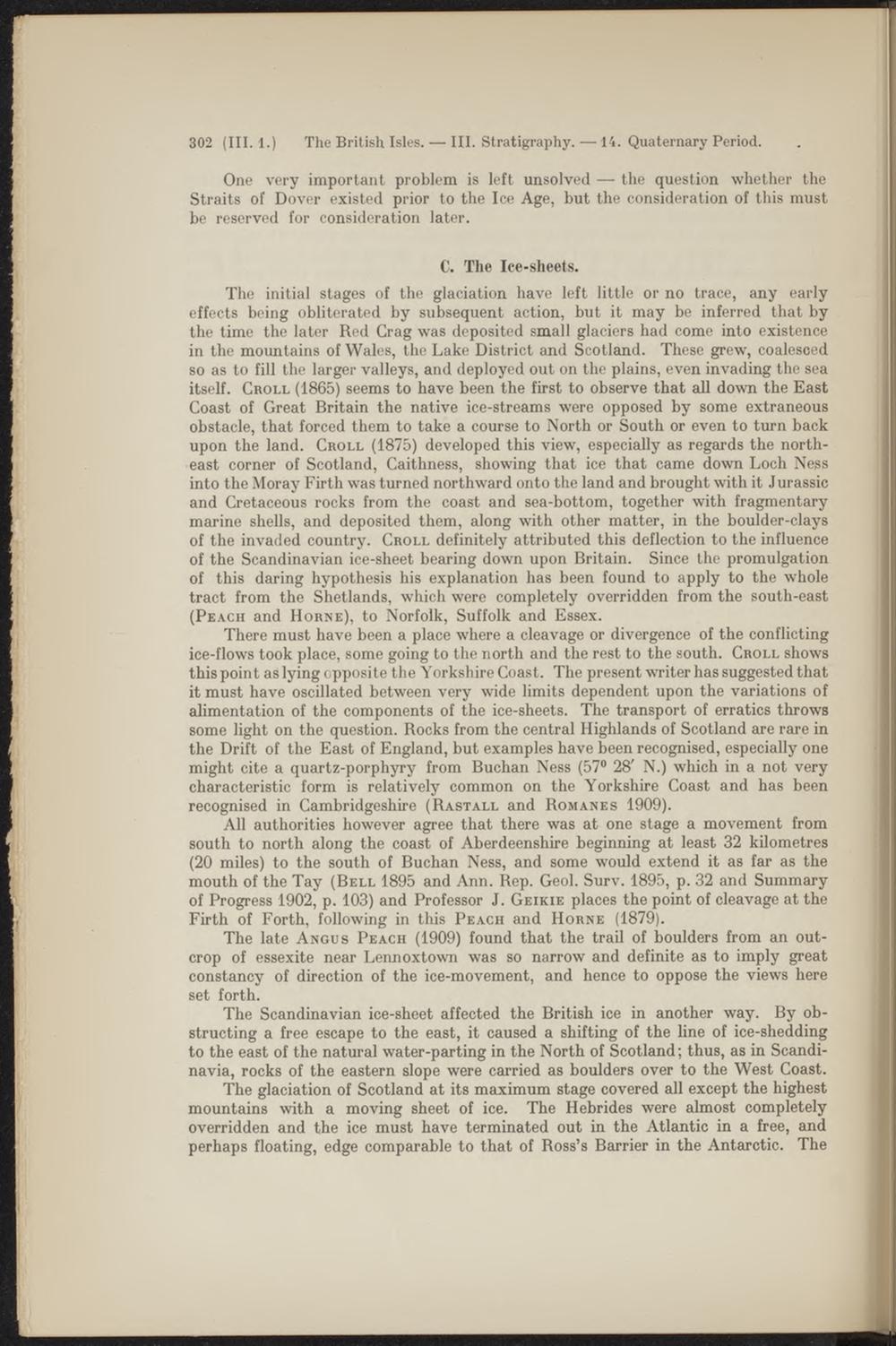 One very important problem is left unsolved — the question whether the Straits of Dover existed prior to the Ice Age, but the consideration of this must be reserved for consideration later.

The initial stages of the glaciation have left little or no tracé, any early effects being obliterated by subsequent action, but it may be inferred that by the time the later Red Crag was deposited small glaciers had come into existence in the mountains of Wales, the Lake District and Scotland. These grew, coalesced so as to fill the larger valleys, and deployed out on the plains, even invading the sea itself. Croll (1865) seems to have been the first to observe that all down the East Coast of Great Britain the native ice-streams were opposed by some extraneous obstacle, that forced them to take a course to North or South or even to turn back upon the land. Croll (1875) developed this view, especially as regards the northeast corner of Scotland, Caithness, showing that ice that came down Loch Ness into the Moray Firth was turned northward onto the land and brought with it Jurassic and Cretaceous rocks from the coast and sea-bottom, together with fragmentary marine shells, and deposited them, along with other matter, in the boulder-clays of the invaded country. Croll definitely attributed this deflection to the influence of the Scandinavian ice-sheet bearing down upon Britain. Since the promulgation of this daring hypothesis his explanation has been found to apply to the whole tract from the Shetlands, which were completely overridden from the south-eaBt (Peach and Horne), to Norfolk, Suffolk and Essex.

There must have been a place where a cleavage or divergence of the conflicting ice-flows took place, some going to the north and the rest to the south. Croll shows this point as lying opposite the Yorkshire Coast. The present writer has suggested that it must have oscillated between very wide limits dependent upon the variations of alimentation of the components of the ice-sheets. The transport of erratics throws some light on the question. Bocks from the central Highlands of Scotland are rare in the Drift of the East of England, but examples have been recognised, especially one might cite a quartz-porphyry from Buchan Ness (57° 28' N.) which in a not very characteristic form is relatively common on the Yorkshire Coast and has been recognised in Cambridgeshire (Rastall and Romanes 1909).

All authorities however agree that there was at one stage a movement from south to north along the coast of Aberdeenshire beginning at least 32 kilometres (20 miles) to the south of Buchan Ness, and some would extend it as far as the mouth of the Tay (Bell 1895 and Ann. Bep. Geol. Surv. 1895, p. 32 and Summary of Progress 1902, p. 103) and Professor J. Geikie places the point of cleavage at the Firth of Forth, following in this Peach and Horne (1879).

The late Angus Peach (1909) found that the trail of boulders from an outcrop of essexite near Lennoxtown was so narrow and definite as to imply great constancy of direction of the ice-movement, and hence to oppose the views here set forth.

The Scandinavian ice-sheet affected the British ice in another way. By obstructing a free escape to the east, it caused a shifting of the line of ice-shedding to the east of the natural water-parting in the North of Scotland; thus, as in Scandinavia, rocks of the eastern slope were carried as boulders over to the West Coast.

The glaciation of Scotland at its maximum stage covered all except the highest mountains with a moving sheet of ice. The Hebrides were almost completely overridden and the ice must have terminated out in the Atlantic in a free, and perhaps floating, edge comparable to that of Boss's Barrier in the Antarctic. The